She was born in 1898 in a barn. She died on the 37th floor of a skyscraper. She was an astronaut.

Ida was not even 70 years old, but her lifetime stretched from an era of horse-drawn transportation to one of live television broadcasts and international flights.

If Mad Men characters were real people, most of them would be much older than Ida Blankenship. Don Draper is now roughly 90 years old – give or take a few, because, you know, Dick Whitman and everything. Joan is 84, and Peggy is about to turn 75. At 61, even little Sally Draper is getting AARP mailers and gearing up for retirement.

That’s right: Sally Draper is only a few years younger than Miss Blankenship.

The magic of old-fashioned style: Peggy actually looks younger in 1970 than she did in 1960.

The Mad Men crew witnessed as much change in the second half of the 20th century as Miss Blankenship did in the first. Contrast the first scene between Peggy and Joan with the last. In 1960 Joan told Peggy that the way to be indispensable at work was knowing what kind of liquor to stock for your boss. Working as collaborators was out of the question. By 1970 (spoiler!), Joan proposes that she and Peggy become partners in a production company. In 1960, Joan told Peggy to “always be a supplicant;” in 1970, they’re both bosses.

During the first seasons, Mad Men’s costuming reflected early ’60s style — which, of course, owed a lot to the straight-laced 1950s. Men wore suits, women wore skirts, and pillbox hats were a hot accessory. By the last season, we saw glimpses of the fashion world we live in now. Characters wore casual clothing – jeans, even! – in settings they wouldn’t have dreamed of in 1960. Early on she dressed like a cat from a Richard Scarry book, but the Sally of 1970 could almost be mistaken for a teenager of today. Some of Mad Men’s 1970 styles look dated to us now – Pete Campbell has the semi-Medieval haircut of every man in my family’s 1970s photo albums – but most wouldn’t look out of place in a hipster neighborhood. By 1970 our modern fashion culture had emerged: much less formal and easier to maintain than the early ’60s looks, owing at least in part to all of the Joans and Peggys who were now working and didn’t have hours each week to press laundry. 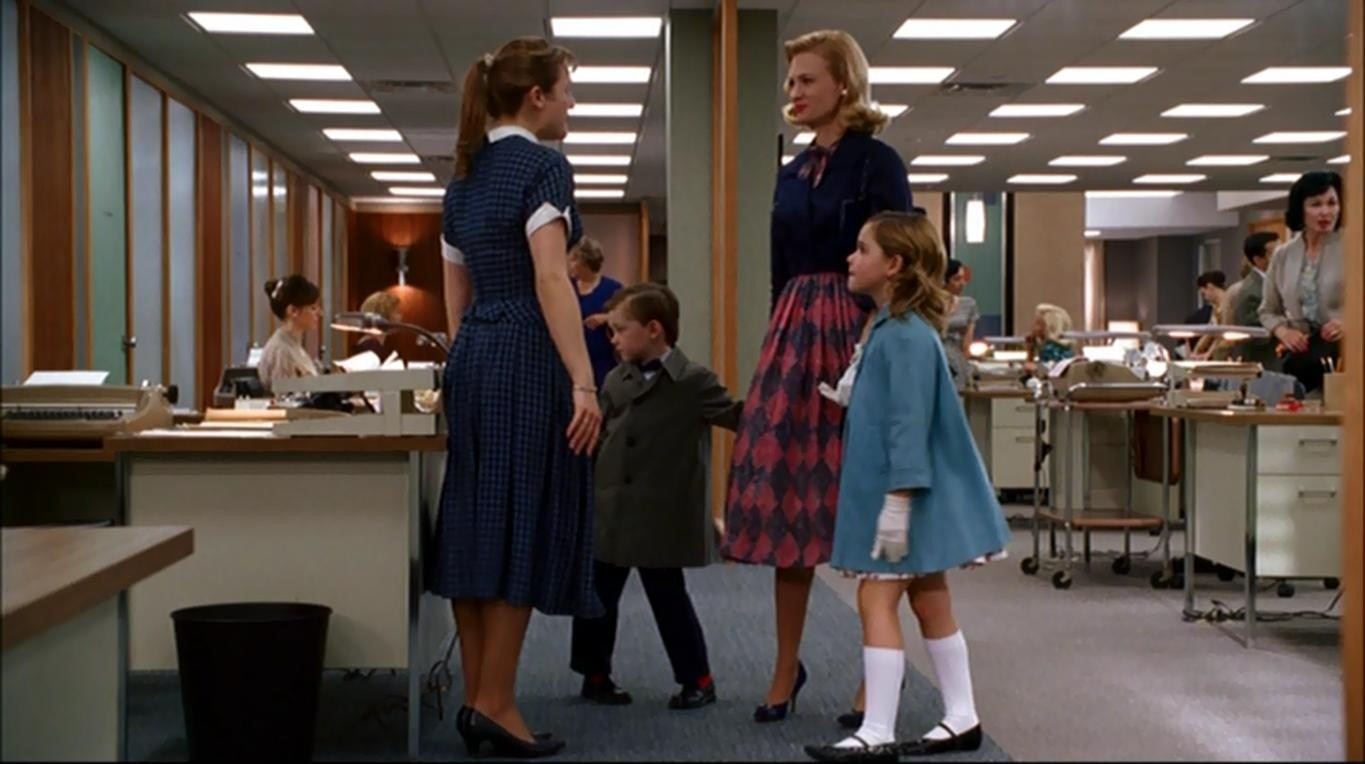 Then there’s advertising. A few years ago I saw an old diner sign for pie. It said: “it is so good!” That’s it. That was advertising of the 1940s or so: tell them the pie is good. By the early seasons of Mad Men, more sophisticated targeted advertising had materialized. Pitch meetings involved discussions like “what kind of person uses this product?” and “who does the person using this product want to be?” By the finale, the public’s aspirations had changed. No longer striving for the middle class, suburban post-war ideal, the consumer of the 1970s wants to be enlightened, free-spirited and original. He wants to buy the world a Coke. With an ad concept that’s sure to get people talking, by 1970 we’re even looking at the start of viral marketing.

When I look at how the changing world affected these characters from 1960 to 1970, I have to wonder what would have happened to them after that. Throughout the 1970s, the firm probably focused on the youth-oriented marketing that was so successful in the Coke pitch. After all, the baby boomers had aged into that lucrative 18-35 demographic. Don Draper, at least trying to be a steady presence in his kids’ lives, stayed away from hardcore ’70s drug use. Sally had a misspent youth, as was the style of the time, and was just about the right age to hit the Studio 54 scene. Joan would have been hard at work at Holloway Harris. And Peggy… I can see the 1970s being Peggy’s decade, with the world finally getting a little closer to catching up with her. She and Stan would have made a great team both at work and out of it, and I’m sure Peggy got really into macrame decor, the ERA and oversized lapels. She would have spearheaded the firm’s pitch for a public service spot during the Oil Crisis. Baby Kevin probably ended the decade very wealthy indeed, because I can’t imagine Roger Sterling lasting that long.

The 1980s is when most of our characters would have seen a big payout. Most of our former “young professionals” would be in their 50s, the prime of their careers. Pete Campbell is still a weenie in the ’80s, because “Pete Campbell is a weenie” is an immutable truth. As a company man at Learjet, he probably made major bank targeting the Reagan-era business travel demographic. Don would find himself going back to the all-American family advertising of the early 60s, now that boomers were settling down with kids. Can’t you just see Joan getting really into ostentatious 1980s fashion as her production company booms?  Trudy is absolutely the kind of ’80s woman who decorated with ducks in bonnets. And of course, little Tammy Campbell would have graduated from Dartmouth in 1986.

Think of the popular advertising of your 90s childhood – all the neon and weird surfer slang. Some of it was coined by young ad execs, but there’s a good chance that those Nickelodeon Magazine and Sunny D spots were pitched by an aged Don Draper type. By the 1990s, the clunky typewriters are all replaced with computers, and 60-something Mad Men sat in front of desktop monitors waiting for the dial-up to turn on. This is probably the decade when most of our characters retired. 1990s Joan may be the world’s fiercest grandmother, with Kevin hitting his 20s and 30s. If Holloway Harris is a success, though, I wouldn’t be surprised to see Joan keep working into her 70s.

With the 2000s recession, most of our characters would be relieved to have left the work force. But maybe someone like Peggy would have kept working into the information age. All of these characters who used rotary phones are now face-timing their grandchildren on iPads. 90-year-old Don probably gets a kick out of online advertising.  If you’re reading this as a 20- or 30-something, Sally is probably close to your mom’s age. Can you picture a middle-aged Sally moving her kid into college in the 2000s, or an adult Sally tuning into Oprah every day after work? Or maybe her trips into the seedier parts of New York City are a sign that she ended up living the Bohemian lifestyle that Betty never had.

Back to 1970: in the Mad Men finale, Don was hanging out with his weird friends and I saw something unmistakable. It was the same exact cooler that accompanied my family on every road trip throughout my whole childhood. Then I did a little math. Let’s say one of my parents got that cooler in 1970 – reasonable, since they were college students at the time – and I remember traveling with it in 1992. The duration between 1992 and now is greater than from 1970 to 1992. In other words: I’m as far from my own childhood as my childhood was from the Mad Men era. The show was set in another time, but I’m from another time, too. When we were kids, the world was full of a lot of the same people, attitudes, and even tangible objects that had been there in the 1960s and 1970s. The other day, my dad mentioned that when he was a kid, all of the “old people” were folks who were alive in the 19th century – and now there are only 5 people left from that century. My brother added that the year he was born is as long ago today as the Korean war was when he was born.

9 thoughts on “They Were Astronauts: Mad Men, Time Travelers”