Last week, I came across an article which featured someone’s experiment of combining ramen with a donut and this is what it looks like: 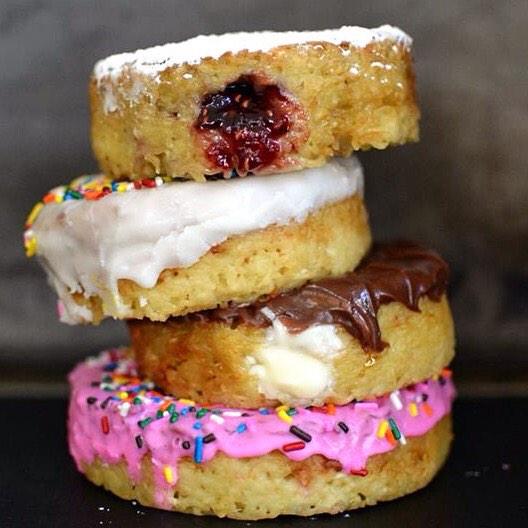 Now, I’m all for creativity and innovativeness, but the first thing that came to my mind when I saw this was WE HAVE GONE TO FAR. Were regular donuts not enough for us? I don’t know about you, but donuts are just fine as they are. I mean, the fact that there are donuts out there topped with bacon and cinnamon toast crunch and snickers bars is, like, pushing it, but still, they’re donuts. They’re delicious. Do we need to improve on it with ramen? RAMEN. In its defense, I have no idea if these ramen donuts are good or not, but to me, they don’t look appetizing at all. And I blame the cronut (which I do find appetizing).

Chef Dominique Ansel may not have started this hybrid craze, but he certainly brought it back to the zeitgeist thanks to his flaky croissant-donut. Fact: when Molly & I went to NYC in September, we failed to realize that cronuts are still a thing and got to Dominique Ansel’s bakery too late and they were sold out. Still got good food there, so I suggest stopping by. Anyways, experimenting with hybrid food is like what Glee did with song mashups and now I fear that we’ve gone too far (just like Glee’s sixth season). Look, I’m all for letting your creative juices flow, but maybe things like ramen donuts are a one and done thing. Here are some other hybrid foods people from the internet and businesses alike have conjured up. You decide if we need to go back or not…

In full disclosure, the ramen donut was made by a blogger who is a bro. Like a college athlete, hates hipsters, drinks excessively at frat parties bro. But his blog is like, actually really good and his food presentation is fantastic. So props to him. His thing is creating hybrid foods (that are usually not the healthiest). Enter this giant fried sushi roll. The fact that he calls it a corn dog turns me off. Basically I just want that spicy tuna roll.

We’re continuing with the bro’s recipes because I’m seriously impressed. Look at that egg tho. It actually makes this ramen poutine look edible. I am a product of a Filipino mother who sometimes didn’t feel like cooking me a real dinner and made me ramen soup a lot. It was never really a college thing for me, it was a childhood thing for me. Which is why I think I don’t want to associate ramen with hybrid food that could possibly ruin my idea of childhood ramen. But poutine tho – if you’ve never had poutine – don’t start with this.

No, that wasn’t a typo. Blogger bro actually named this dish Spaghetti and Meatbwaffles. He basically took a chunk of meatball and put it in a waffle maker and came out with this. Is it sad that my only complaint about this is that the ratio of spaghetti to meatbwaffle isn’t equal?

Alright, enough of the bro dude. We’ve seen this one before. It came after the cronut and I still don’t understand how this is any easier to eat than a regular hamburger. Also why do people tend to put more shit in ramen burgers than regular burgers??

Again, like donuts, pizza is fine as it is. Stop trying to make pizza better.

Did you know that a bagel is the equivalent to eating five slices of toast? Well it is. And IDK what the croissant equivalent is but when you have half a croissant and half a bagel you get a whole stinking loaf of bread.

Remember this from a few months ago? And how you said you were going to try to make it? Did you? Okay.

In all fairness, I’ve never tried any of these. But that’s because they all sound disgusting. A *kettle cooked* Wasabi Ginger flavor?? Those are the two things I avoid (ok, maybe a little wasabs) when eating sushi. Why would I want the FLAVOR of those two things on a potato chip. A POTATO CHIP.

WHAT HAPPENED TO US, AMERICA???

I’m still debating whether or not I think this is a good idea. On one hand, I love pancakes. On the other, I love mac and cheese. However, I’m not quite sure if I put them together, I’d love them as a whole. It’s like the time Rachel screwed up the Thanksgiving trifle and it tasted like feet. Custard? Good. Jam? Good. Meat? Gooood.

5 thoughts on “Ramen Donuts: WE HAVE TO GO BACK”