90s fashion is – like it or not – totally in. And so is Christmas. So for the 2014 Yuletide Season, let’s take all our fashion cues from Christmas movies of the 1990s, shall we?

When I was watching Home Alone with some nephews last week, I told them that this movie showed how people dressed when their mom and I were kids. Then, I realized that everyone looked almost exactly like they do now. Not sure if this is because we’ve 360’d back to 1990 fashion, because the costume designers aimed for a timeless  look, or a bit of both.

There’s a lot of fashion here, so let’s take it category by category:

Please, try to suppress your rage at Kevin’s garbage family for the next few moments so we can focus on their outfits. Here’s what I’m seeing. A baseball-style coat on Buzz, a few of Kate Middleton-worthy cranberry-colored jackets, cheerful Fair Isle-type scarves, and some heavier coats that you can probably still buy from Patagonia or North Face. All outerwear that is entirely appropriate for winter 2014-2015.

The best, though, is Kevin’s tan parka with the red-green plaid flannel lining. And that knit reindeer hat? I’ll take one in an adult size, please.

No, you’re not looking at the early 90s J.C. Penney Christmas catalog. The garbage McCallisters are serving some serious pajama here, and I think we could stand to recreate it. I’d wear Kevin’s robe and PJs with the contrasting white piping. And how about those nightgowns? What do we have to do to bring those back?

I bet Fuller and the cousin over Kev’s shoulder are still wearing those same glasses, but now in an ironic hipster-y way.

If left home alone, all of the little boys I know would remain in whatever they woke up in that morning because they “can’t find their clothes.” Even if they woke up on top of or next to their clothes. But not Kevin. Kevin appreciates a good chunky-knit sweater, and what can I say? So do we.

Turtlenecks are so silly (looks-wise) and practical (warmth-wise) that I kind of want to start wearing them again. But do I dare wear them under a button-up like Kev’s garbage relative?

My memories of 1990 are sketchy at best, but I do recall wearing a lot of silly, loud prints. To preserve the timeless aesthetic, the Home Alone costumers stuck to muted tones and L.L. Bean-y cuts instead of the neon monstrosities that most of us were wearing. Um. I would wear Fuller’s exact shirt. And maybe the glasses.

Look At All These Freaking Coats

Obviously Susan’s mother made some serious bank, because I doubt most New Yorkers could even afford an apartment that would house this many beautiful, classic wool coats.

Everyone. There were more coats. It’s important that you know that there were even more coats, but I had to stop myself.

Like the costume designers of Home Alone, the folks behind Miracle on 34th Street aimed for a timeless production. And nothing quite says “timeless” like the Peter Pan collar — the collar that will never grow up, if you will. 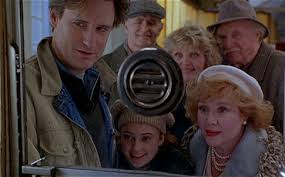 Chicago is cold, but when you have a floppy knit tam or a newsboy cap, you won’t feel the chill. It was true in 1995 and is true 19 years later.

Everybody had a chunky, oversized oatmeal-colored sweater, probably from The Gap or, like Barbara Moss or whatever. They were cozy as hell.

What’s so 90s about this? In addition to the thick chain stitch on Sandy’s sweater, I’m pretty sure it’s cropped, so it would fit right in now. Not like an above-the-belly-button thing, but this look where they were … my friend and I used to call them “awkwardly short.” Hitting right around your natural waist, so that if you raised your arms you were in trouble. Or you would have been, but it was 1995 and you were wearing a bodysuit so it was fine. 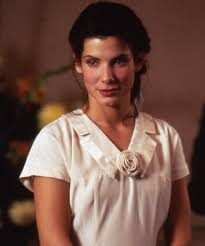 Nobody ever talks about this when they talk about 90s fashion, but there was this thing for a while where we were all like “fuck it, I’m just gonna put a rosette on this.” Seriously. Around this time my First Communion dress had a sailor collar that met in a rosette and to this day if you try to tell me I wasn’t hot shit, I will not hear it.

This movie makes me want to lift my hands in praise … for its wardrobe department. Whitney looks like a Central Park ice skater from a Currier and Ives print.

So, I really like Whitney’s ensemble here. But I also have to note that if you were a preacher’s wife or a Catholic school teacher in the mid-90s, you definitely wore that front-button dress/ turtleneck combo into the ground. Still, as the weather turns chillier I find myself more and more into the long skirt/dress with boots look.