In this Let’s All Decorate, we’re taking it back to 1996 – one of the summers that stands out sharpest in my memory, although I’m not sure why. The Olympics were on TV and I was obsessed with the entire U.S. Gymnastics team and their flat snappy hair clips. My brothers and I knocked a pint of wall primer onto the hall carpet imitating old people at a wedding dancing the Macarena. I spent my days at acting camp, falling hard for improv. Mitzi, my beloved, gentle mutt, slipped out of the front gate and was never seen again. My mission in life was to be the kind of person who owned a bra, and by fall I had one (I concede that it was, and is, completely unnecessary).  Inspired by the summer’s hit film Harriet The Spy, I took to observing my inner-city neighbors and writing down their activities in a notebook … for about two weeks, when I forgot. There were kind of a lot of drug deals, to be honest. And with my older sister about to head off to her first year of college, we were all shuffling bedrooms.

Nothing says “child of privilege” more than getting your very own bedroom, and being given permission to pick out a new bedspread, wallpaper, and accessories. I took the mission very seriously for an almost-10-year-old: I went antiquing. However, most of my planning consisted of flipping through the giant fall Sears and J.C. Penney catalogs and dreaming about the perfectly coordinated tween bedroom. THIS EXACT SET. Yes. The back had pink dots and teal bows.

Now, as an almost-fifth-grader, I wasn’t going in for licensed character merchandise anymore. But there was a comforter set for any tv show, movie, or hobby you were into. In my previous bedroom I had Minnie Mouse because my mom predicted that I’d only be into Beauty and the Beast for a year of so (so instead I got a character I was never into ever).

Here, you like unicorns? Of course you do. Enough to sleep under them? Hell yes: Maybe you’re just generically the kind of kid who likes to listen to music and eat ice cream, probably? (AKA the “your dad’s new girlfriend helped decorate a room in his new townhouse and things are okay, but sort of weird” set)

Curtains That Match The Comforter A Little TOO Well

I have to go put my head between my knees for a sec. Yikes. That’s a sick Mrs. Potts on the bedside table, though. Also: canopy beds. YES. Yes. Like sleeping in your own secret tent/fort every night.

But did anyone have parents who bought the whole curtain/rug/bedding set? Because my mom was always  like “come on, Moll, you can have the comforter but I’m just getting white curtains from K-Mart.” Unlike this nerd (who is probs really great at Carmen Sandiego):

A Bed That’s Trying To Be Something Else

Today my bed is just trying to be a bed. Well, I made the headboard out of an 1800s barn door, so I guess it’s trying to be that, but it’s mostly just a bed. But in 1996, your bed could be anything! It could be a race car, a doll house, or – as I had c. 1999 – a bookcase. I don’t know why beds couldn’t just be themselves but it was sort of a weird time socio-culturally.

Like, look at this lucky freaking kid. You just know that in 2015 she’s one of those girls who has a ridiculously lucrative job doing something vague in marketing and who actually enjoys bridal and baby showers, because her life has been blessed from day one: By the way, I slept in my nephew’s race car bed last year and it was just like a tiny, awful bed with static electricity on the sides.

A Desk You’ll Never Use

Yeah, you’ll never use that desk. You do your homework at the dining room table.

Above is Abbi Jacobson’s childhood desk, and who knows, maybe she DID use it. Maybe that’s how she became who she is today, by being the kind of person who actually uses her desk. 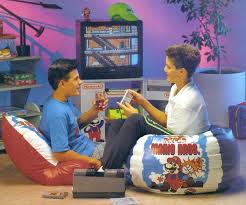 Hey, former 90s kid, current adult person! How’s your back feeling? Not awesome? Yeah, that’s because we sat on bean bags and, like, pool toys. The inflatable chair was more late 90s and the bean bag was more early-mid, if memory serves.

Fun fact: my cat used my inflatable chair as a litter box (as it should be, honestly) and then my dad sloshed cat pee everywhere getting it downstairs. So not worth $21.99 from the Delia*s catalog. In the 90s, children and old ladies alike were really into collecting useless things. I actually still have a mix of mine and my grandma’s 90s porcelain doll collections in boxes in my attic that I won’t open because they’ll probably start haunting me. Like Kirsten Dunst, pictured above, you probably used your shelves to “express your personality” and stash your Dottie the Dalmation and World Book collection, plus maybe a Sand Art creation or two.

As far as I was concerned, these were strictly for rich kids and dentist waiting rooms.