There’s a Christian Mingle movie, and it’s on Netflix. It stars Lacey Chabert (Claudia Salinger, Gretchen Weiners) as Gwyneth, a vaguely (but not seriously) Christian lady who joins Christian Mingle. That’s all you need to know. I watched it so you don’t have to, and here are my questions, comments and concerns:

Where “mingling” = online dating, if it appeals to you. Mingling in the sense of making small talk at networking events? Now that I have some problems with.

Concern: But as a movie?

Comment: Lacey Chabert used to have a bible next to her bed.

Which is to say: I have a weird memory of an article or blurb about Lacey Chabert in a Christian teen magazine in the late 90s/ early 2000s. She has a bible next to her bed. Or did as a teen. According to this magazine my friend had.

Now, Lacey Chabert is one of my favorite Frequent Hallmark Actresses. I’m afraid you’re going to read that as sarcasm; it isn’t.

Question: Is this a fictional movie that the characters are watching in Saved?

Because that’s how I’m approaching it.

Comment: Voiceover: “I found him. With a capitol H.”

Question: Is this an AU fic about a 30-year-old Gretchen Weiners?

Because that’s also how I’m approaching it.

That’s not shade. Her teeth are pretty. 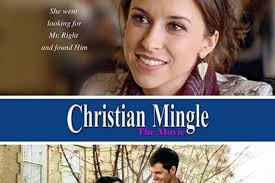 Comment: Gwyneth’s friend group = (L-R) a girl from a Disney Channel Original Movie who wants to do modern dance but her mom won’t let her, a blonde woman who was friends with Mindy on .5 seasons of The Mindy Project, Gretchen, and an indie singer from the early 2010s.

I mean, based on wardrobe and styling choices.

Concern: The general portrayal of single women is NOOOOOOO.

It’s fine to want a relationship, but this whole competing with female friends to get engaged first / seeming like a sad sack because you’re – gasp! – 30 years old and single (even though you have a nice apartment, some kind of job where your office is shabby chic, and a nice friend group) / judging your still-single friends thing feels like if a 60-year-old Christian man were trying to write my life and got it all wrong. Which – by the way – is exactly what this is.

It’s like a movie through the lens of how your aunts probably see you.

Not the actress – she’s good- but the trope.

Comment: Voiceover: “At this point, I’m like God, this is Gwyneth Payton calling, and if you are out there, um, help?!”

(Non-shady moment: I know of at least 3 couples who met on a Catholic dating site, so if it’s your thing go for it.)

Comment: In her CM profile, Gretchen inputs her church’s name as “God’s House.”

… Which, if it’s a joke about someone who doesn’t go to church making up the name of something that sounds churchy, is funny.

Good work, Christian Mingle: The Movie. Made me chuckle.

Question: If Gretchen isn’t into church/Jesus/etc, why doesn’t she just join literally any other dating site?

Question: Why are people so concerned about nicknames for two-syllable names?

The Christian Mingler asks Gwyneth what people call her. I flashed back to every time one of my siblings or cousins or friends has a baby  and some uncle type always asks what you’ll call them. For a two-syllable name. Which takes like a second to say.

Comment: The Christian Mingler is written to be a Jake Lacy type.

Question: Is Jake Lacy a type yet?

HAHAHAHA. Got me again, Christian Mingle: The Movie.

Question: Is the set design of the Bible Study friend’s house a joke?

It’s full of framed inspirational posters with waterfalls and Bible quotes and a throw pillow that definitely says Jesus on it. Really feeling the Saved vibes here.

Or just in this movie?

Safe to guess that these people aren’t Catholic. The decor of the Church says, if not Catholic, at least mainline protestant – Anglican or Lutheran, probs, based on the Jesus on the crucifix (vs a bare cross). Maybe Methodist or Presbyterian. But the overall rhetoric the church people use says nondenominational evangelical.

I guess I’m saying I was surprised to see Gretchen walk into an Episcopal-looking church and not a megachurch with lyrics on screens and a worship band and a smoothie bar.

Comment: Everyone at this rancho is dressed like they’re at one of those camps where they send Christian youths to get them back on the straight and narrow or whatever.

It’s like 95% Christian. Unless they don’t mean evangelizing. But what else is Gretchen fit to do?

I’m almost positive they explained this while I wasn’t paying attention. It’s my fault, not the movie.

(Ed. note: there was a hurricane.)

Comment: They’re painting a church. Sister Act did it better.

That’s not really a fair comparison. The only movie as good as Sister Act is Sister Act II: Back In The Habit.

Is it because she’s glowing with the white lady love of Christ? Comment: The Christian Mingler hands Gretchen her copy of Christianity for Dummies that was found under her bed. He presents it like a mom who just found a bong in her teen’s room.

Question: Isn’t Christianity for Dummies already a thing? Isn’t that just the Bible?

Not calling anyone who reads it DUMB I just mean all the stuff is in there.

Besides, what’s so bad about Christianity for Dummies? Gretchen says she was baptized and grew up with church and now she’s trying to learn more about it – see “all these people are awful,” above.

Question: Also does anyone read For Dummies books anymore?

The whole internet is a for dummies guide already, for free.

Comment: Don’t worry, the secretary goes to a storefront church with good music.

Concern: Gretchen has a creepy haunted doll baby in her apartment. And a murky gray painting of disembodied hands.

Is this what they think interior design of the unchurched looks like?

Question: HOW IS GRETCHEN USEFUL IN MEXICO. HOW.

A little boy tells Gretchen to go to the church – a Spanish 101 query, if that – and she needs him to repeat it slowly in English. #UglyAmerican

One thought on “Questions, Comments, Concerns: Christian Mingle – The Movie”