Can Jellicles? We’ll find out next week, when the Cats revival either winds Broadway up like a ball of yarn … or coughs up a big ‘ol hairball.

Cats is Andrew Lloyd Webber’s 1981 musical based on T.S. Eliot’s book about cat poems. Turn that sentence over in your head a bit. Theater-goers WENT IN FOR THIS. In the early 90s my mom took my three older siblings to Cats on Broadway and left me at home. The tales of the amazing theater experience convinced me that the stage was a place where anything can happen – I mean, Rum Tum Tugger himself stroked my brother (or something. I don’t exactly know because I wasn’t invited).  I exacted my revenge by making my siblings attend dozens of my plays and musicals over the following years, most of which were not good. The cast recording was a constant in our car and kitchen, and in first grade I could sing you verse after verse about the “heavyside layer,” which I don’t remember but was probably cat death? When I was 6 I finally saw the national touring company. In a bit of family lore, my father walked into the lobby during intermission with a bemused expression, shaking his head. “I don’t get it,” he said.

Now I’m a full-grown adult, and to be quite honest, I don’t get it either. My memories of actors Fosse-dancing while wearing giant carpet suits have faded into the mist just like the memories that one sad cat sang about. I remember snippets of songs and the feeling of something magical happening on stage, but I look at the list of characters and musical numbers and none of it makes sense to me. In the spirit of the new Cats production, here’s what the kitty characters are probably like, based on their weird names alone.

Okay, so this has to be a racist minstrel-y caricature from the 1930s,  yet also still a cat. You know how in really old movies they couldn’t say someone was gay so they’d use all these weird euphemisms instead? That.

Like, (and here you have to do a voice like you’re from an early talkie): “he’s a confirmed bachelor and a real rumpleteazer.”

Need further clarification? OK Take whatever Gabriella means to you:

Then make it meth: 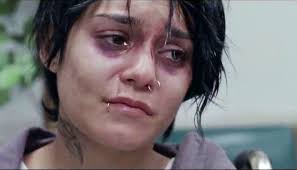 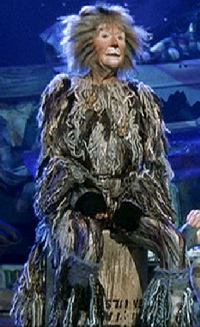 This really old guy who hangs around a bar in the theater district and when people start talking about Hamilton, he chimes in with stories about, like, the original run of Company. Very into Sondheim. Sits with one foot propped up on his knee. Wears that one kind of hat. (I’m visualizing a cat Harold Prince.) 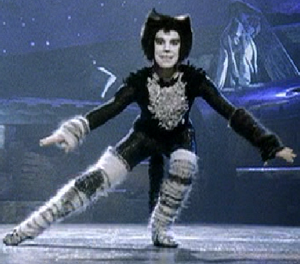 A pretentious college professor who wears jackets with suede patches on the elbows.

Oh, goodness. Like a tubby booze uncle. And not the fun one, but the one where you’re just praying that no hot-button topics come up when he’s around because you know it’s going to be awful. Says stuff he knows you disagree with because he’s trying to start an argument, then keeps badgering you when you don’t react. A superfan of a failing NFL franchise, but all he does is complain about it.

When I was a kid, my grandmother said she didn’t like cats because you could feel their bones squirming under their skin (which is also how I visualized myself as a scrawny, not-put-together child). That’s what jellicle cats are. You pick them up and their skin just slinks over their bones until they’ve wriggled out of your arms.

That neighbor you had as a child who was Italian or Cuban, wore a housecoat, and her main things were obsessively sweeping her front steps and tending the marigolds around her Bathtub Madonna.

The gruff, wizened old neighbor who was actually a cool writer in the 1960s and who teaches the protagonist, a teenaged white boy, about the world, the pen and himself.
Except the cat version of that.

One of those lacrosse bros who has gone by his last name for so long that you can never remember what his first name was. (It’s Brent. Or Shane. Or Bryce.)

A third-tier sidekick who appears in one of the less-good chapters of Don Quixote or The Canterbury Tales or Pilgrim’s Progress, and then Jo March used it as a reference and you never understood it until you read the source book in college. A cat rapper. Began his career as a kitten, when he was known as Lil Bustopher.

False. This isn’t a name. It’s one of those weird, but non-fatal, things that can happen when a baby is brand new. “He’s mostly healthy, they just want to keep him in the hospital for the few days because he has jellylorum.”

One thought on “What ‘Cats’ Characters Are Probably Like, Based On Their Names”