Last night, Hamilton: An American Musical went in with a record-breaking 16 nominations and by the end of the show, it left with 11, just short of tying The Producers’ record of 12 in 2001. But you know what, it doesn’t even matter. The fact that this groundbreaking, impactful, diverse show has done this well at all should be an accomplishment enough. It’s obvious we’re big fans of Hamilton here (see: #HamilWeek), but we’re also big fans of theatre in general, so if you happened to miss any of the show last night, here are some of the best moments you didn’t see, and some you’ll want to relive over and over again.

Let’s be real, half the people tuning into the Tonys this year don’t even usually know they’re happening. For theater nerds like us, the Tonys have always been our version of the Super Bowl. But I’m willing to bet for all these n00bs who watched the Tonys last night, it was all about Hamilton. So naturally, the producers pandered to their audience and gave them a whole lotta Hamilton, including the very first bit, which was a parody of Hamilton’s opening number, Alexander Hamilton. Except the lyrics were changed to fit host James Corden. After that, James launched into a medley of musicals that made me think he was gunning for some kind of Guinness World Record. The whole idea of the number was reminiscent of Neil Patrick Harris’ sentiments in his opening number a few years ago (starting around 5:44, makes me cry every time), but the feeling still rings true – the Tonys are a chance for those young kids in the middle of nowhere to know that their “weird” obsession with theater and musicals isn’t just them. The end features mini-mes of all the leading musical actors and actresses and that’s what really got me. Surprise, I cried.

In homage to #Ham4Ham, casts of nominated shows stood under the Beacon Theater marquee and paid tribute to iconic shows of the past. Kicking it off were the nominees for Best Score, what winner Lin-Manuel Miranda called a “jam band”, featuring himself, Sara Bareilles, Steve Martin and Edie Brickell and Andrew Lloyd Webber. Andrew Lloyd Webber on tambourine. TAMBOURINE.

Even though she wasn’t nominated, six-time Tony winner Audra McDonald managed to still make headlines because she did this tap number pregnant. She’s 45. I want to be her when I grow up.

Cynthia Erivo & The Cast of The Color Purple

Listen, I can only spread the gospel of Cynthia Erivo so much (#WomanCrushWednesday and all), and her performance of I’m Here is, yet again, pick your jaw up off the floor flawless. Add in the rest of the cast of the Tony-winning The Color Purple – including newest addition Heather Headley – and you’re gonna need a few moments to gather yourself after your wig gets snatched.

The revival of Spring Awakening, which featured both deaf and hearing cast members, has been closed for three months. It was nominated for both Best Revival of a Musical and Best Director for Michael Arden (not Chris Fitzgerald), but in order to perform at the Tonys, you need to shell out literal thousands of dollars. Since the show isn’t open, Michael and the cast launched a crowdfunding campaign to get them to the Tonys and it worked! We got to see this inspiring new rendition of Spring Awakening and it was worth every penny. Thank God this show is going on the road.

In the second season of Unbreakable Kimmy Schmidt, Titus talks about auditioning (and ultimately losing) a role in Hamilton. Because Netflix folks are essentially marketing geniuses, they created an ad specifically featuring Titus in what looks like his legit audition tape trying out for Hamilton. This commercial was played during the Tonys. Amazing.

One of my favorite things about the Tonys and Broadway in general is that there’s a real camaraderie between actors and genuine love within the community. Everyone seems to be supporting others in a way you’d think is odd in Hollywood. Prior to the show, members of Hamilton, On Your Feet!, Shuffle Along and more gathered for a pre-show pep talk/prayer circle because they’re all on the same team, striving to do their best on stage. You won’t see Oscar nominees doing this backstage.

I think it was Audra who told James Corden that the best advice she could give him is just to keep everyone in the audience entertained throughout the night. It’s a long show, so make sure the crowd enjoys it. It seems he took this to heart because during commercials, he instated Commercial Karaoke and recruited stars to sing the great hits – including Sean Hayes and Jake Gyllenhaal singing Aladdin. Don’t say I never gave you anything.

Also Sara Bareilles rolling out on the Tonys stage with her piano knowing full well she’s about to wreck us all.

Usually our post-awards show post is a Best/Worst Dressed situation, so to fulfill that quota, here are some of my faves from last night, starting with the absolutely gorgeous Laura Benanti in Oscar de la Renta and stunning Nicolette Robinson (Mrs. Leslie Odom Jr.) in a flowing Christian Siriano gown. Of course our patron saint Lupita Nyong’o didn’t disappoint, while Sara Bareilles, Jane Krakowski and Adrienne Warren all did their thang too.

Unlike major Broadway phenomenons with fervent fan bases of the past (A Chorus Line, Rent, etc.) Hamilton came in an era where social media reigns and fans from all over the world can send one simple tweet to Lin and he’ll respond in Internet-language like he’s your BFF. The cast members of Hamilton kill it when it comes to social media, and on Tonys day, they did not disappoint. From my fave Andrew Chappelle taking over the official Hamilton Snapchat to Seth Stewart sharing backstage videos to the MOST turnt Broadway warmup ever, to my boo Oak posting videos of the boys dancing (just look at his whole feed from Sunday it’s worth it). This is how you werk social media, y’all. I freaking love this cast.

I attempted to count how many times I cried during the Tonys, and I stopped because I was already at an obscene amount prior to the show started (thanks to seeing rehearsal vid of the HamilCast’s Rent bumper). I def stopped the cry count because I was sobbing SOBBING during Renee’s speech.

A) His fistbump/fireworks explosion with Vanessa. Definition of #CoupleGoals. B) Lin casually writing a sonnet like it’s easy. Literal genius. C) EVERYTHING ABOUT THE SONNET.

What Kind of Day Has It Been

For those that missed the subtle West Wing moment #TonyAwards pic.twitter.com/QH5AB2x03z

Lin has long said The West Wing is one of his favorite shows and thus a big influence on Hamilton (“looking for a mind at work” in The Schuyler Sisters is straight from TWW), so it’s not really a surprise that he snuck this sly move in. The signal was used in S1E22, What Kind of Day Has It Been and basically alerted President Bartlet of good news. Good news indeed.

History Is Happening In Manhattan 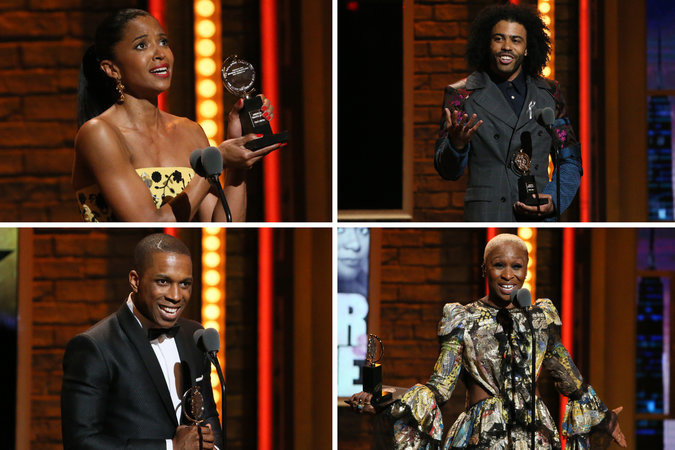 Everyone who won for Ham had a great speech, but the best way to end the show was with a performance with the whole cast (because, pandering but also, history). It was the most joyous number because everyone was dressed in their formal gear and not in revolutionary costumes. For once it was the actors having fun and reveling in their 11 wins. I mean what other show has actors that dab on the stage after winning all those Tonys?

3 thoughts on “Highlights from the HamilTonys”