It’s Thanksgiving in July! We’re back for more Cheers and we’re chatting turkey and food fights and possibly the show’s best episode ever.

Netflix synopsis: Diane is among a select few graduate students one of her professors has asked to spend Thanksgiving with his family, in the pilgrim tradition.

T: We’ve skipped an entire season and it happens to be Coach’s last season. Nicholas Colasanto passed away in real life from a heart attack, but in the show, they didn’t really explain how he died. Woody Harrelson comes in to replace him and he not only replaces Coach as another bartender, but as the one to tell all the stupid jokes now. For some reason I can tolerate it way more than Coach?

Case in point, the first joke in the cold open:

“Boy, it seems like Christmas comes earlier every year, doesn’t it?” Sam

“I think if you check, Sam, it always comes on the 25th of December.” Woody

M: “This is my first Thanksgiving away from home. I mean, unless you count last year” – my boo, Woody.

I kind of feel bad that I said before that Coach was the character they kept around in case they needed something bad to happen to somebody but also … accurate?

T: Sam and Diane aren’t back together but still mackin’ on each other. At the end of season 4, when Sam is dating Kate Mulgrew, the finale ends with a cliffhanger in which he calls someone and asks the person on the other end to marry him. However, it wasn’t until the S5 premiere that we find out it’s Diane. She makes him propose again in a more romantic way, but then she says no because she feels like she’s his rebound from Kate Mulgrew, making Diane even more annoying. Ever since, they’ve been on and off and it’s like fahkin get it together people.

M: Carla, I think, had another baby, right? And I now have a theory that Cheers is to blame for show runners thinking audiences love “will they/won’t they” romances.

T: Oh and Frasier stuck around. Probs because he has a spin-off to look forward to.

So What Had Happened Was…

T: Diane’s professor invites select guests to a Thanksgiving dinner much like Professor Slughorn’s Slug Club Christmas party. But she ends up at Carla’s with the rest of the gang after she showed up at the Slug Club only to find out she had only been invited to serve as a waitress.

M: I got so excited when I saw we were writing about a Thanksgiving episode – usually some of my favorite sitcom eps!

Did we even know that Diane was still in school? I thought she was like 30. By the way, Diane is an 80s Muggle Hermione Granger what with all her sucking up to the professor. Except, you know, not written by JK Rowling.

T: Carla holds Thanksgiving at her new place (right next to the airport), but everyone’s got their own problems. Norm, who brought a frozen turkey to Thanksgiving, has a big fight with Vera, Sam’s date doesn’t show up, while Fraiser is annoyed with the guys constantly moving the TV.

M: It’s neither here nor there, but Carla’s apartment set is where the change in aspect ratio for Netflix really stood out. There were just like 3 feet of plain white wall above her wallpaper and paneling.

T: The tension in the room is so palpable but it’s finally broken with a food fight, resulting in the best scene to date.

T: Plus they cheered for Coach, which was almost enough for me to cry.

M: So far, this is the first of our Cheers Chats episodes that I would recommend to someone who had never seen the show so they’d understand how great it is.

T: Woody says he’s thankful he can do  a weird thing with his tongue, and everyone’s response is to do weird shit too. Sam licks his plate for some reason and Carla has her leg wrapped around her head which explains why she has 8 children.

T: Perfect example of Diane needing to shut up is when she makes everyone go around and say what they’re thankful for. She gets up and says:

“…But on this very special occasion, my mind goes back over the years to the people who have influenced me. And I would like to name some of them for you. Teilhard Chardin, George Sand, Caravaggio. Oh, Emily Dickinson, the Buddha, Frank Lloyd Wright [time jump cut] Jean d’Arc, Shari Lewis and Lamb Chop.” 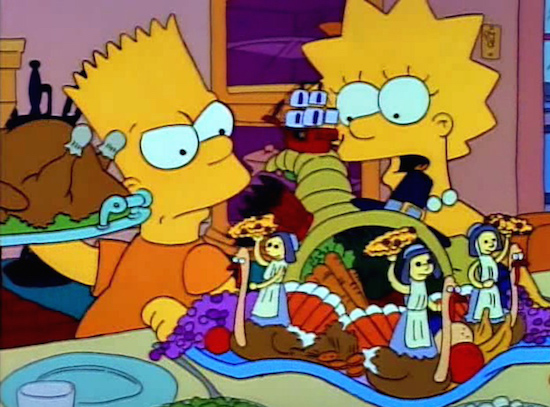 It featured Georgia O’Keefe and Susan B Anthony.

M: I do feel a little sorry for Diane in her Pilgrim outfit grumbling that serving as waitstaff for her professor might be okay when you’re a “wide-eyed 19 year old, but not when you’re… not.” Which I guess answered my question about whether she’s a mature student.

T: Diane has to be a party pooper and attempt to end the food night and she gets all Red Ross like when Ross’ angry side comes out when he plays rugby on Friends.

T: Diane gets jealous and whines about Sam having a date for Thanksgiving.

“Besides, I know that we’ll have many holidays together when you and I are one.” Diane

“You already are one, Diane.” Sam

M: “I’m thankful that I have a super car and a cool stereo and I’m not wearing a pilgrim outfit” – SAMUEL. Just make out with her.

T: Diane is all cutesy with Sam after his date ends up spending TGives with her sister instead of going to TGives at Carla’s

No, I’m serious. I had a date and it fell through. Sam

Oh, you don’t have to convince me, Sam. I believe you. Diane

I’m telling you the truth. Sam

And I love you for it. Diane

T: Sam is the first to throw beets? And at Diane, no less.

There’s a scene where the guys are sitting around the TV watching a WWF match featuring Hulk Hogan. The actual scene wasn’t necessarily funny but LOL at Hulk Hogan

Just sort of generally everything Woody said was great. Not the words, but the delivery.

“The little pop thing has a name, can we all say thermometer” – Frasier. Then everyone says “thermometer,” but angrily.

“Please, please! We are not here to be thankful for strange things we can do with our bodies.” Diane

Diane tries to get back at Sam and she attempts to throw a pie at him, but lands right on the face of Vera, who decides to come after all. WE ALMOST SAW VERA’S FACE. Is she like Mr. Kim or Wilson from Home Improvement. And apparently this is the only time we “see” Vera in the whole series.

M: When the food fight starts in earnest, Diane tries to break it up with a guttural yell like she’s Leslie Knope v. Eagleton.

“This time of year is filled with arguments, suicides, murders. Yeah, I guess it’s the seasonal happiness of others tends to throw a glaring light on the flaws in our own interpersonal relationships. But see, of course, that’s no problem for me. I’m alone.” Fraiser

“Are you kiddin’? I did my part this year. I was in “Hands Across America,” remember?” Cliff refusing to volunteer at the soup kitchen for TGives with his mom

“Oh, who the hell do we think we’re kidding? We’re all a bunch of pathetic dropouts. Scorned by our loved ones, as if anybody ever loved us at all.” Fraiser

T: What ever happened to Woody’s hometown girlfriend? I don’t think they ever explained that.

T: Why is Norm the only one in charge of the turkey? Why don’t they try to help?

M: Couldn’t they have at least started with the sides when they were warm?

She describes this as “An absolutely authentic example of feminine colonial headwear.”

Carla’s got a new stylist and it’s called the effects of the ’80s.

It’s Thanksgiving, not Easter, Sam. But also it might not be clear in this pic, but he is V tan.

Next Up: We are basing our watch list off of AV Club’s 10 Episodes That Show How Cheers Stayed Great For 11 Seasons. We’re going chronologically, so stop by next month when we’ll discuss season six, episode 23, Bar Wars.