I’m creating a national holiday and it’s called Michelle Obama Day. Today is that day. Our First Lady’s 53rd birthday just happens to fall during not only days before she and her best friend leave the White House, but also during Obama Week here at Cookies + Sangria. Which one is the bigger honor? WE’LL NEVER KNOW. Yesterday we cried over Barack’s tender moments with little nuggets, and today, we’ll cry once again over Barack and Michelle’s tender moments. Basically expect us to cry for the entire week.

But first, a note from the President:

To the girl from the South Side who took on a role she didn't ask for and made it her own: Happy Birthday, Michelle. I love you. pic.twitter.com/lvjfx418hn

Election Night 2008 is one of those dates you remember forever. Where you were, who were you were with, how you felt when the results came in. Much like this past month, that night had me overwhelmed with emotion, pride, and a sense that this leadership, not just from Barack, but from Michelle. Seeing this All-American family take a victory lap felt like a dream. I felt like ‘hope’ wasn’t just an idealistic campaign slogan, but a real concept taking shape before our very eyes. This family helped us have faith in the country again.

This photo is from a 2008 election night rally. I remember looking at this photo the day after the election and realizing, with wonder and pride, that our first family was finally black. It’s been eight years and sometimes I get thrilled and overwhelmed all over again.

My feelings from inauguration day in 2009 feel so fresh that it’s really hard to comprehend that it was eight years ago. Remember seeing this beautiful, young, brilliant couple truly enjoying the moment and each other?

I love this moment between the First Couple. Although his staff and secret service is surrounding them, it’s like they are in a world of their own. And ready to take on the White House. Also, that Jason Wu gown is to die and who else cries anytime they see Barack and Michelle dancing to Beyonce singing At Last at one of the balls?!

Even Valerie Jarrett is jealous of their love.

Michelle and Barack watch fireworks from the White House on Independence Day. July, 2009.

I just love this picture. The end.

Barack and Michelle wave to the citizens of Oslo, where they were to attend the Nobel Peace Prize dinner. December, 2009.

Are back shot photos played out or still artistic? Who knows, who cares? I am all in for this one, where Barack and Michelle are waving to the masses outside. Sure it’s great from the front, but there’s something about the stillness from the inside that makes this moment even more magical. 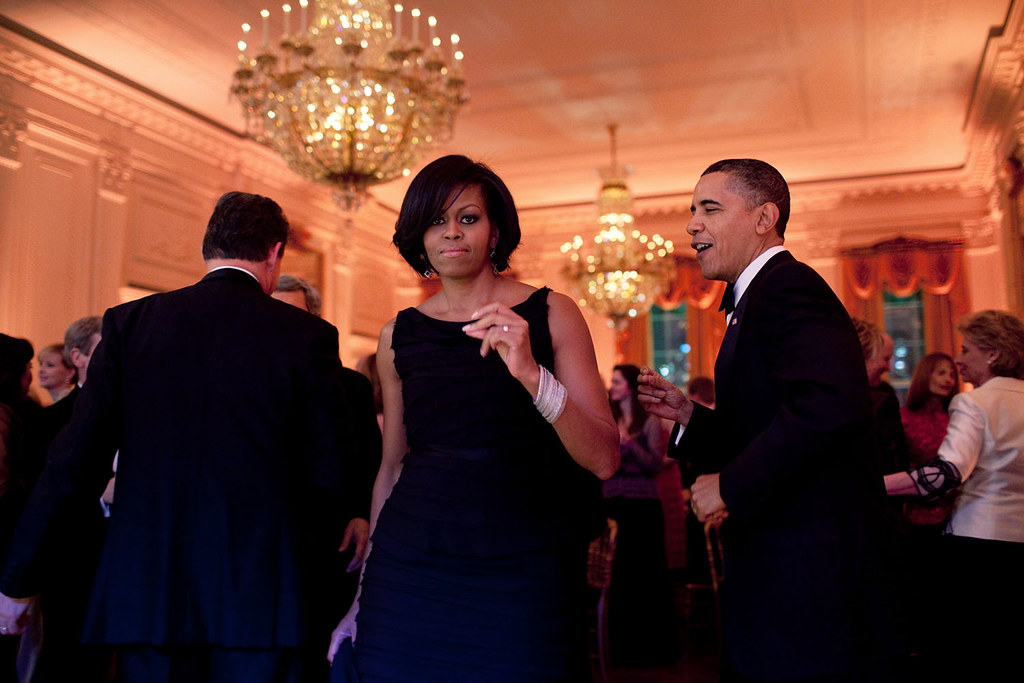 Barack and Michelle dance to Harry Connick, Jr. at the Governors Ball. February, 2010

I see you, Michelle. 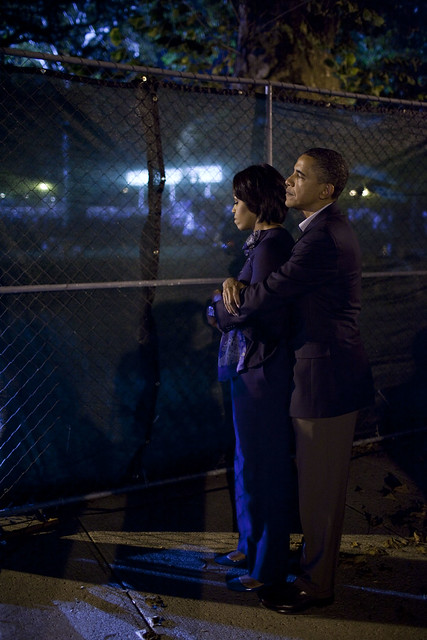 Tender moments outside a rally in Columbus, Ohio. October, 2010. 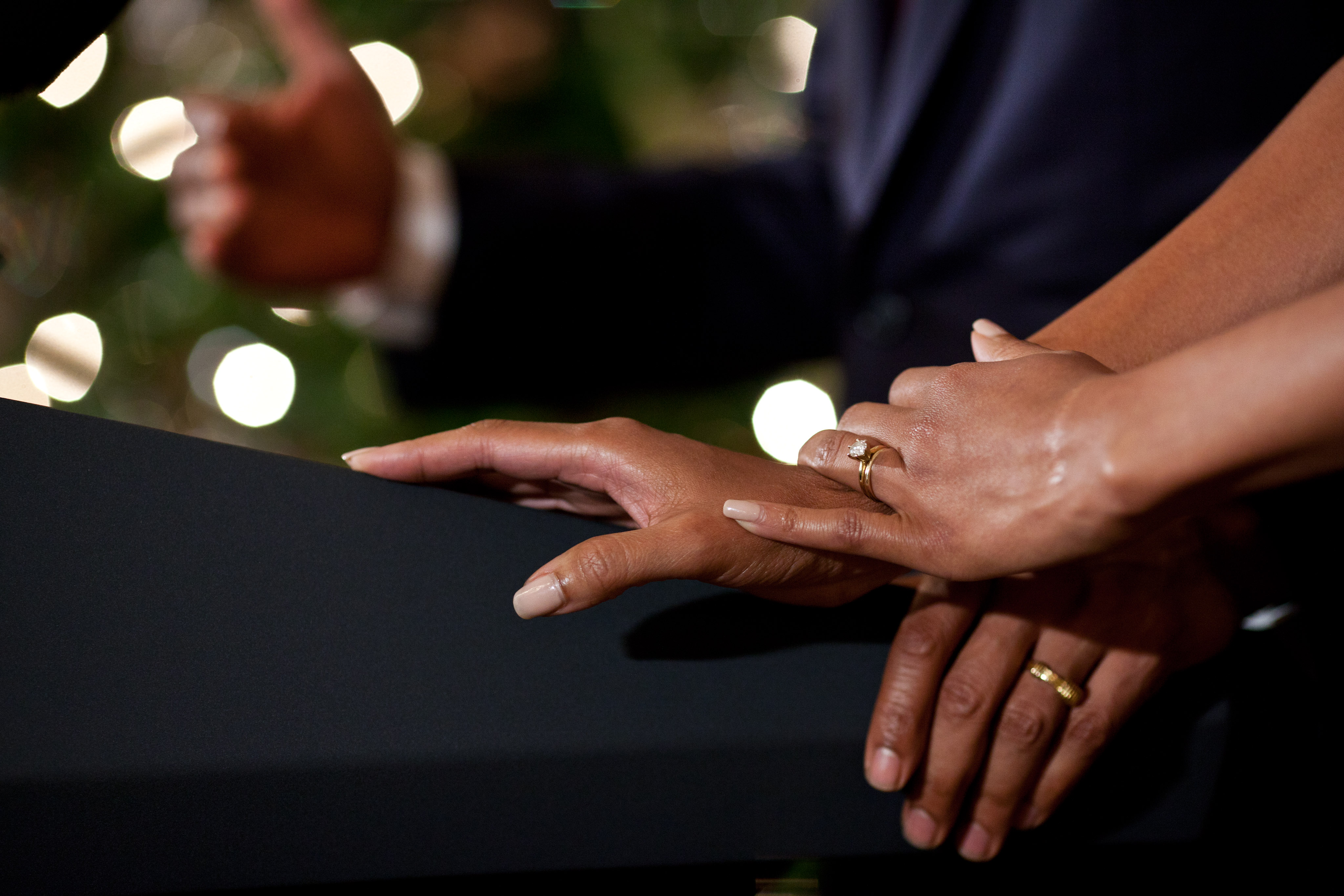 Michelle places her hand atop Barack as he speaks from a podium during a Christmas event at the White House. December, 2011.

It’s the little things, you know?

Michelle and Barack take in the lakeside views of their hometown of Chicago. June, 2012.

Per the film Southside With You, this is where Barack and Michelle strolled during their first date. This time around, they came with a little extra security. They arrived in the helicopter landing zone and instead of going straight to the motorcade, these two lovebirds walked past the car and to the edge of Lake Michigan where this photo was taken.

Find a man who looks at you like Barack looks at Michelle.

Michelle and Barack give in to the Kiss Cam during a basketball game between team USA and Brazil. July, 2012.

The best part of this Kiss Cam situation is Malia insisting they do it, and Uncle Joe reluctantly watching Barry plant a smooch on his wife. {Relive the moment here}

Michelle holds onto Barack’s hand during a campaign event in Iowa. August, 2012.

Alternate caption: Michelle got bangs and Barack is singing, “I-I-I. I’m soo in love with you!”

Barack and Michelle wave to the folks along the parade route on Inauguration Day. January, 2013.

According to Pete Souza, when he asked the President if he could ride along in the presidential limousine, Barack said, “But Michelle and I were planning to make out.” DAMNIT PETE YOU RUIN EVERYTHING.

Barack helps Michelle down the stairs during the State Dinner for France’s President Hollande. February, 2014 .

We can’t see it, but you just know Michelle has her proud face on right now. Mistletoe at the White House. December, 2014.

Michelle and Pete Souza spotted the Mistletoe over Barack’s head and she made the move to make sure he followed tradition. These two, I swear. Barack and Michelle listen to American Hero Rep. John Lewis as he speaks at the 50th anniversary of Bloody Sunday and the Selma to Montgomery civil rights marches.

Michelle snuggles up to Barack. March, 2015.

History has its eyes on you.

Michelle Obama in Vera Wang got Barack lookin like he just realized his date to prom is by far the hottest. pic.twitter.com/Me8kLYthCb

The State Dinners alway give Michelle, especially, a chance to walk the runway with an eyepopping gown (her drop the mic dress for their very last one, for example). The Vera Wang gown for the 2015 State Dinner for China was a big crowd pleaser, but nothing was more pleasing than to see Michelle fix Barack’s tie, then him giving the thumbs up right after. 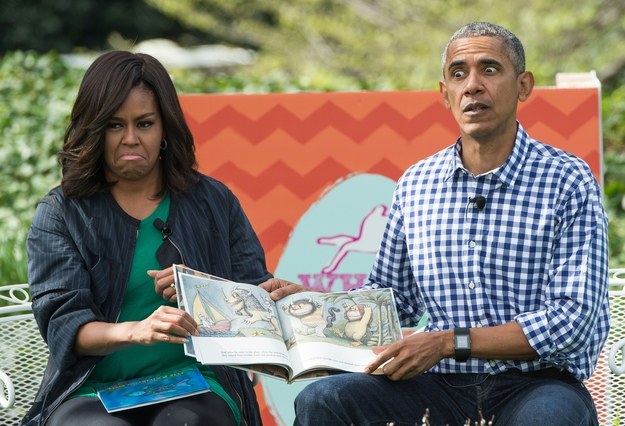 Barack and Michelle animatedly read Where The Wild Things Are to kids on Easter. March, 2016.

Michelle posted this photo on Barack’s 55th birthday. It reminds me of an interview I once saw of Jacqueline Kennedy, where she described her favorite photo of JFK’s inauguration — a moment where she’s chucking him under the chin, which she said was a sweeter moment than any kiss they could’ve caught on film. Maybe we did get a second Camelot.

100 percent my favorite photo shoot of these two together, ever. Barack and Michelle give a toast to the White House staff. October, 2016.

Raise a glass to freedom.

3 thoughts on “One Last Time: Obama and The First Lady”