Think about this: for a whole generation of children, President Barack Obama is the only president they can remember. They’ve only known a president grounded in goodwill, diplomacy and belief in the possibility of change and progress. As long as these children have been aware of it, their president has been black. Eight years isn’t much to us as adults, but for a child it’s a lifetime. These children have spent a lifetime knowing that it’s possible for a child of any race to grow up to be president – if you can see it, you can be it.

One of the best insights into President Obama’s character comes when he interacts with children. I’d say that’s one of the best ways to get a look at anybody’s character. Not everybody is a “kid person,” but it says a lot when an adult regards a child as a full person. This means listening, regarding their opinions as important and valid, and seeing the humanity in a person who has only been walking this earth for a handful of years. President Obama listens to kids and meets their gaze at their level: this is important. President Obama’s interactions with children also show his sense of fun and spontaneity – he is more interested in playing and having a good time than in appearing stoic or dignified. Most of the others-centered people I have known share this quality. They are fully present with whoever is in the room, child or adult, and are more tuned into that experience than how they are perceived.

All that to say: President Obama is a great guy. We are thrilled that today’s children have grown up with him as their president. Also, he’s adorable with kids. Here are some of our favorite Obama and kids moments: 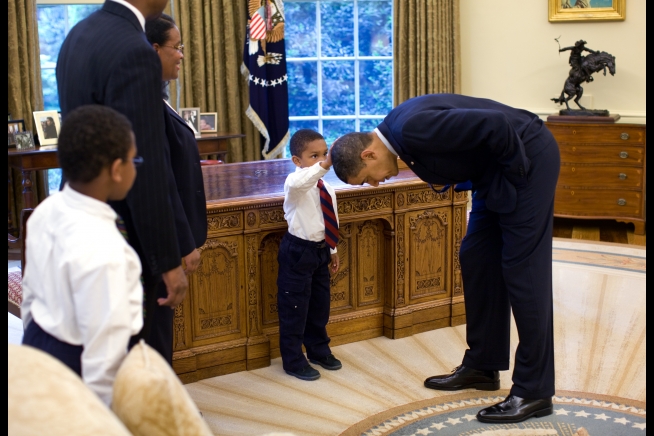 “A temporary White House staffer, Carlton Philadelphia, brought his family to the Oval Office for a farewell photo with President Obama. Carlton’s son softly told the President he had just gotten a haircut like President Obama, and asked if he could feel the President’s head to see if it felt the same as his.” May 8, 2009

This little guy told Barry he had gotten a haircut just like the President, and asked if he could feel his head to see if it felt the same as his. This photo has become one of the most iconic snapshots of Barack’s administration, and is the perfect example of how much of a role model he’s been to kids around the country, and the world.

President Obama with his niece Savita in Martha’s Vineyard, August, 2009.

I always forget Barack has a half-sister that’s Indonesian, and she’s married to a full Chinese dude, which is why Barack’s niece is the most Asian. #America 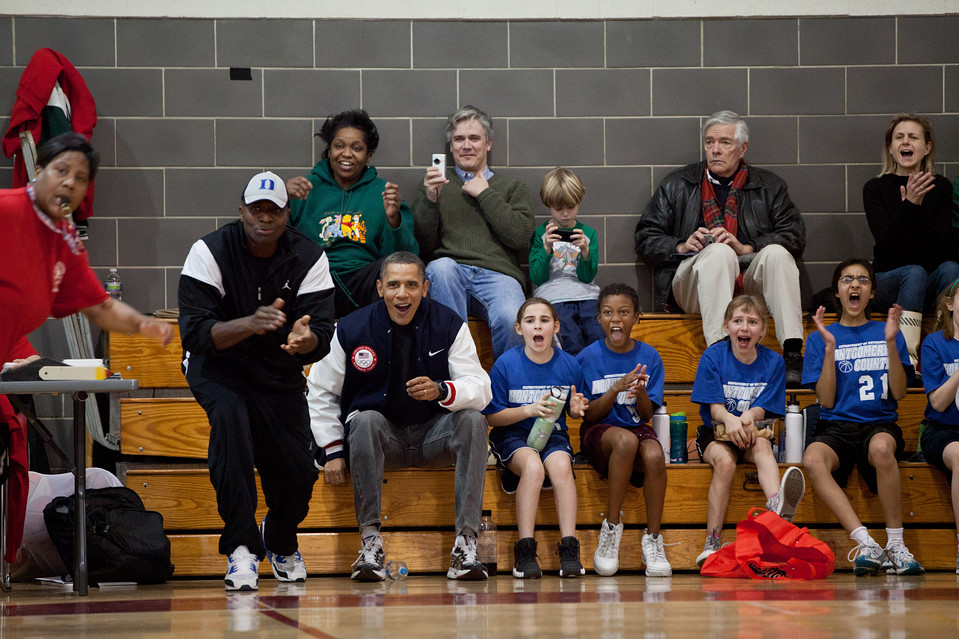 Barack filling in as coach for Sasha’s basketball team, February, 2011.

When two of the coaches for your kid’s basketball team have to bail last minute, you ask the other kids’ parents if they can fill in. And one of the volunteers happens to be the President of the United States. Barack and his then personal aide, Reggie Love pull out their coach hats and playbooks and here they are cheering on the girls’ team from the sidelines. Super normal.

This was just a stop along Barack’s journey that day, as he had attended Sasha’s 4th grade closing ceremony just next door. But I love the faces of these kinder who have no idea that they’re face to face with the President. Years from now, they’ll look back in awe that they were that close to our of our country’s greatest leaders.

As Barack looks at Abraham Lincoln before him, I look at little Arianna thinking, “Same, girl. Same.”

One of the many things I appreciated about Barack and Michelle is that they brought youth both physically and in their spirits back into the White House. It’s been a hot second since we’ve seen a POTUS running around chasing a tot in the Oval Office.

President Obama signs a photograph for a young man at the New Orleans, airport. July, 2012.

What a wonderful thing to see yourself in your role model.

The President takes a hit from Spider-Man. October, 2012

Another iconic shot taken by official White House photographer Pete Souza (most of these photos are by him), in which Nicholas Tamarin, 3, slings his web after trick-or-treating in the Eisenhower Executive Office Building with his father, WH aide Nate Tamarin. Yet again, it shows the playfulness and joy President Obama has around kids, which might be why he now has this photo hanging in the West Wing. 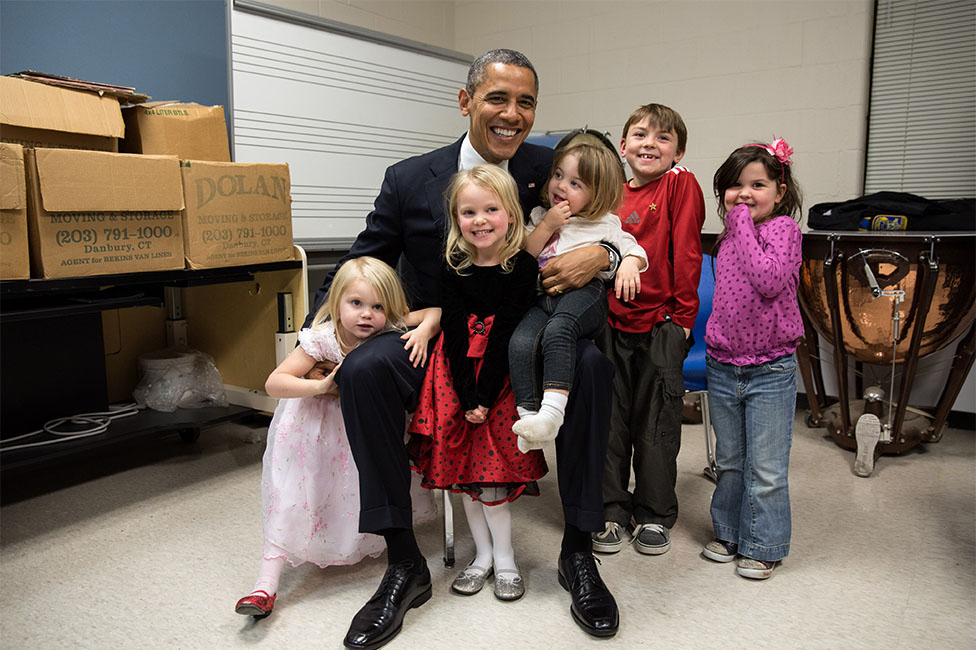 President Obama poses with the family of Emilie Parker, one of the 20 children killed in Newtown. December, 2012

President Obama has called the day the Newtown shooting occurred the worst day of his presidency, and two days after it happened, he visited the victims’ families and to give a speech at a prayer vigil. He spent hours speaking with them, and this photo was taken with the siblings and cousins of Emile, who died in the massacre. The President was able to find a moment to smile in the midst of a horrifying tragedy, and it’s all because he has hope for a bright future of these children.

The President with Robby Novak aka Kid President. April, 2013.

Remember when we all met Kid President for the first time and he shared his inspirational words with us?

When you at the White House for a once-in-a-lifetime event but you mad tired because your mom made you get up at the buttcrack of dawn to get ready.

So much happiness from both of these adorable humans. 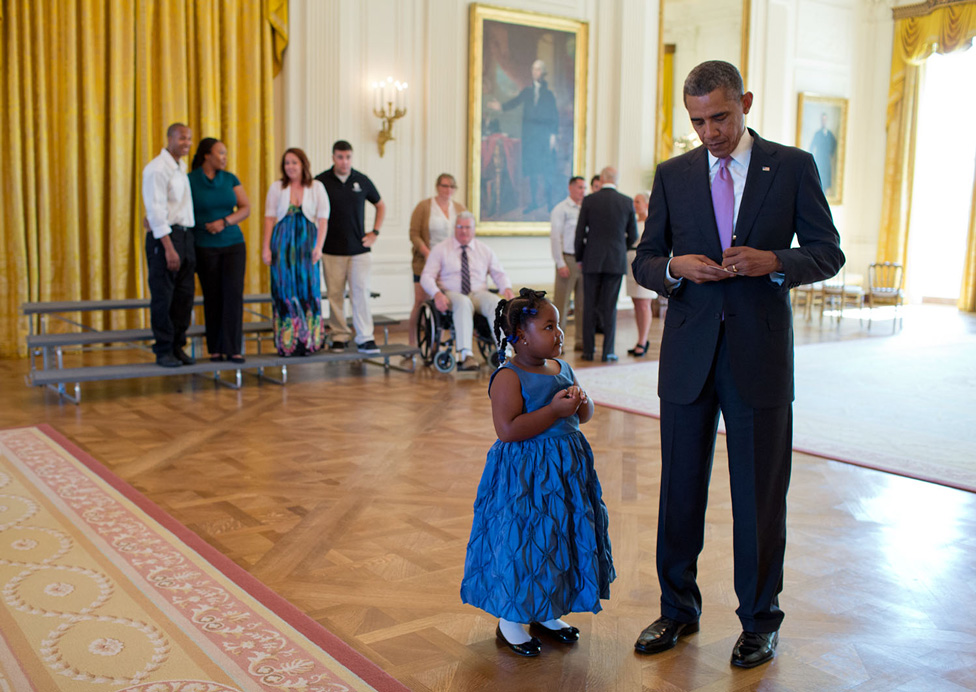 Alanah skipped Kindergarten for the day to attend an event for Wounded Warriors and their families, and personally asked the President to write her the note. This child is me. I am this child.

President Obama meets with students at an elementary school at MacDill Air Force Base in Tampa, Florida. September, 2014

Barry specifically said, “Don’t make rabbit ears” so obviously it was Opposite Day and these kids did it anyways. Please also note the girl to his right, who is just clutching on to him as if he’s her uncle. That’s the kind of person we want in the White House.

President Obama greets a young boy at the Marine Corps base Hawaii on Christmas Day, 2014

“Hey, I recognize you from the TV!”

A baby grabs a hold of President Obama’s face in Kingston, Jamaica. April, 2015.

It’s cute when a baby does it, but if I did this I’d be tackled by Secret Service. Probs worth it.

Who doesn’t love tummy time in the Oval on top of the Presidential seal? Bonus: here’s a pic of Barry calling Ben when baby Ella was born in 2014. I mean. Literal precious moments.

Tag yourself I’m the crying mom in the background, despite not knowing these children at all.

I bet President Obama’s going to be the dad who keeps asking Sasha and Malia to have kids when they’re older so he can have grandbabies.

I said hey what’s up hello.

Ella Rhodes, possibly the luckiest baby in the White House?

Hey remember Barack’s niece Savita from earlier? Yeah this is her. December, 2015

Like Sasha and Malia, Savita also grew up a lot during the course of her uncle’s tenure in the White House. And yet again, he reminds us that his family is American in the truest sense of the word. Jacob Haynes, 11, snaps a selfie with the President as he holds Jacob’s four-year-old brother. December, 2015

But first – let me take a selfie (is that reference dated).

President Obama meets with Prince William and Princess Kate, and is introduced to Prince George. April 2016.

Prince George is too cool to suit up for Barry and decided to wear his daytime loungewear instead (I think he was actually about to take a nap).

Just think about all the children who have crawled around the Oval with the President and how they’ve been blessed with his presence.

Amariyanna wrote President Obama a letter asking him to visit her hometown of Flint, Michigan as they battle the devastating water crisis and what she’s doing to help. For a fun comparison, this is Amariyanna (also Little Miss Flint) meeting President-Elect T*ump. Again, President Obama has of course been a role model to all children who have only known him to be the POTUS, but he’s especially been an iconic figure for many black children and teens who may not feel like they have a place in the American society. To see someone of such power that they can see a little of him in themselves is a moving and magical thing. *After this picture was taken by WH photog Pete Souza, he tracked down Clark’s name and had the President sign a copy for the tot to have.

Isn’t it weird to think that for the kids whose parents work in the White House that it’s totally the norm they could run into the President of the United States? This pic was taken when former Obama campaign strategist Axelrod stopped by to speak with Barack, and in a pause from the conversation with the adults, he looked over to see little Maelin sitting in VP Joe Biden’s chair. Casually eating an apple because, Michelle.

The President meets another superhero on Halloween. October, 2016

One of the best events to look at videos from is the annual Halloween parade, and last year, the President ran into Superman aka Walker Earnest, son ofPress Secretary Josh Earnest,. What happened is the most adorable thing that will leave your ovaries in pain. Watch here. Barack spends more time on the floor of the Oval with kids than the President-Elect has lawsuit against him. And that’s a lot. If I had the option to play around on the floor with a tot on Election Day, I would be doing this instead of work too.

Six-year-old Alex Myteberi meets with the President after writing a letter asking him to help a young Syrian refugee. November, 2016.

You’ve seen that heartbreaking photo of a young Syrian refugee covered in blood and dust after an air strike in Aleppo. So did Alex. He decided to write to President Obama asking him to help the refugee and bring him to his home in Scarsdale, New York so he could be their new brother. The President read the letter, invited Alex and his family to the White House and even read excerpts from the letter in a speech at the UN. If you’re in the mood for crying (or even if you’re not) watch Alex’s story here.

3 thoughts on “One Last Time: Obama and Kids”