It’s a bromance for the ages –  a story of friendship through some of the best times a person can go through and some of the worst, a tale of two fun-loving but brilliant men running the free world and sharing a laugh at the same time. Yes, today is all about President Barack Obama and his bro for life, Vice President Joe Biden.

So much of Joe Biden’s character is rooted in lightness and positivity that it almost feels inappropriate to introduce him with a discussion of darkness. Still, Joe has known more of it that anyone should. When Joe was still just a young senator, husband and father, his wife Neilia and baby daughter Naomi were killed in a car accident a week before Christmas. Years later, while serving as Vice President, Joe lost his young, accomplished and beloved son Beau to brain cancer. Through that trial President Obama was Joe’s closest colleague and chosen brother. True to form, Joe has stood for goodness and light through it all. It’s exactly that true camradery, through light times and dark, that has lead the Obiden friendship to be possibly the most-memed buddy duo in our day. We all love the hilarious captions and imaginary in-jokes online, but even the undoctored photos show the close and joyful relationship between POTUS and VPOTUS.

Whether they’re Let’s Move-ing throughout the White House, making each other friendship bracelets, checking in on their children’s and grandchildren’s first slumber party together or ending their White House run with a surprise Medal of Freedom ceremony, we have learned a lot about friendship from these two leaders, friends and brothers. Barack and Joe share a laugh at the Windmill Ice Cream shop in Pennsylvania. August, 2008.

Everyone knows Joe and his other love affair with ice cream, but when he can bring his brother along for a cone, that’s like bringing your significant other home to your parents.

Barack and Joe react to a speech made by Irish Prime Minister Brian Cowen at a St Patrick’s Day reception. March, 2010.

Barack, Joe and Hillary Clinton share a laugh in the Oval. January, 2012

Background on this photo, per Pete Souza: “Secretary of State Hillary Clinton had just accidentally dropped all of her briefing papers onto the Oval Office rug and she, the President and Vice President all reacted in a way that indicated that surely I wouldn’t get a photo of that to embarrass her.” #ImStillWithHer #ImStillWithThem

Joe attempts to block Barack as they wait before the STOCK Act signing event. April, 2012.

Barack and Joe courtside at the U.S. Senior Men’s National Team and Brazil during a pre-Olympic exhibition basketball game on July, 2012.

They’re bros through and through.

They’re such fam that POTUS brags about Joe’s grandkids FOR HIM. Multi-generational cuteness alert: Maisy and Sasha are reportedly close friends and played on their school basketball team together.

Barack and Joe hang out before a campaign rally in New Hampshire. September, 2012

Joe stands to applaud Barack during the State of the Union. February, 2013.

You can always count on Joe to have your back.

Barack and Michelle chit chat with Joe and Jill before the National Governors Association Dinner. February, 2013.

Can you just imagine the double dates these four will be able to go on as private citizens?

This is when Joe and Barack took a walk to get lunch and it really hit me just how on you have to be 24/7 when you’re the president. If you watch the video of them on their little lunch date, Barack stops to shake hands with almost every person. It’s that grassroots/organizer in him and it’s so incredibly admirable. I love him so much.

Joe and Barack hold hands during a group prayer in a meeting with faith leaders to discuss immigration reform. November 2013.

This is the image that will be printed on the front of their joint thank you notes they’ll be handwriting to all their staff starting January 21st.

First of all, I think the Let’s Move campaign was a worthy and excellent program. Second, I still get a kick out of Joe helping his buddy out with this thing his wife is really into. Like, if these were just two regular dudes in the suburbs, Joe would be running a 5K with Barack after Michelle signed him up as a New Year’s Resolution push. Honestly I’ve only seen clips of the eulogy the President gave because emotions, but you can just tell that he wasn’t phoning it in as a responsibility or favor to Joe and his family. It was filled with compassion and deep sadness as if one of his own family members had died. And that’s what makes this bond so special. 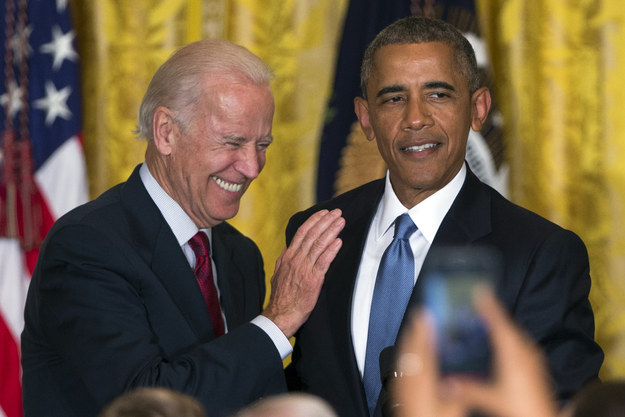 Biden and Obama react to a heckler at an LGBT pride event. June, 2015.

When you’re a leader, you’re going to face criticism – some of it founded, some ridiculous. If you don’t have an inflated sense of self-importance, it probably just makes you giggle sometimes.

Joe looks on as Barack wipes away tears while speaking about gun violence. January, 2016.

Because his pain is the other’s pain and vice versa. They showed us that humanity and friendship was alive and well in the White House. Not just in the happy times, but in the devastating, frustrating, “Americans are fucking dying out there but why can’t we ever get anything done to help them” in Washington times, too. When your boo knows you ain’t about that whole cake life because Michelle.

Joe and Barack embrace after the President gives his farewell speech in Chicago. January, 2017.

I’m really going to miss them. Their friendship and their leadership.

President Obama awards the Vice President with the Presidential Medal of Freedom. January, 2017.

I mean. If you haven’t watched this whole thing yet, it’s the most American thing you can do right now.

2 thoughts on “One Last Time: Obama and Biden”