Comment: You can tell they’ve got that Netflix budget because of all the establishing shots of New York City.

On Hallmark, everything takes place in a picturesque small town that’s obsessed with Christmas because that’s the cheaper thing to do.

Dialogue like this is why people think that editor means human spellcheck.

Question: Wait, how can I become a Junior Editor?

Forget that my real rank is above “junior editor.” Amber gets sent abroad to cover a European prince. Nice work if you can get it.

or actually, this is new york’s FINEST diner.

Amber goes into a tiny, empty diner that definitely seems like it’s somewhere in Hallmarkville. It’s her dad’s. He’s a Real New York Character, AKA he has an accent.

I don’t need this to be a GOOD movie, I just need to have a good time watching it.

Comment: Maybe Lead Girl would be a senior editor if she hadn’t showed up to a royal press conference in jeans and sneakers.

non-spoiler: rom-com lady is clumsy. also i have a follow-up question about the white plastic light switch. surely the castle electrician could upgrade that.

Now would be an appropriate time for me to use the terms “slacks” and “pumps.” Yech.

Question: Can we cut to the part where Emily is vibrant and lovable?

On one hand, A+ for having a child with disabilities as a primary character! On the other, they make her petulant and peevish like that hidden boy in Secret Garden. Collin, was it?

Comment: You know Rose McIver (Lead Girl) from other stuff.

I IMDB’d her because her face was so familiar, and not just because she looks like she’d play Keri Russell’s sister. She’s been in a LOT but I remember her best as the sister in The Lovely Bones.

Comment: We didn’t have to wait long for Emily to get vibrant and lovable.

Concern: My ability to suspend disbelief.

For a split second I start questioning how Amber is pulling this off, whether there are visa implications, the scads of journalistic ethics violations… and then I relax into the soft fluff of A Christmas Prince like a child making a snow angel.

Comment: Cousin Simon’s no Prince Richard, but could still get it.

Princess Emily isn’t in line for the throne and I’m having S1 Downton Abbey flashbacks.

Comment: The cell phone sticking up out of Amber’s back pocket is honestly some of the most realistic costuming I’ve seen.

Concern: We have competition.

Meet Lady Sophia, a hussy in a red dress. You can tell she’s a hussy by the red dress. I don’t make the rules.

Question: Do we know for absolutely sure that Princess Emily’s not a Little Girl Ghost (TM Joey Tribbiani)?

Emily discovers Amber’s true identity and barters to keep Amber’s secret as long as she writes the truth about Richard. Emily says knows because she sneaked into Amber’s unsecured computer, but she seems awfully British and all-knowing …  like a Little Girl Ghost.

Comment: I want Emily the Little Girl Ghost to get a friend who is a child. 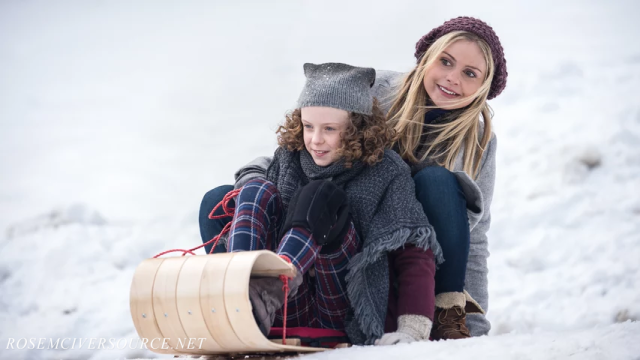 I definitely think that children with disabilities should be encouraged to do anything other kids do (with necessary modifications and safety supports) but I just feel like Amber should’ve at least Googled if it was fine.

There was an equistrian sequence, but we all already knew that going into this. Richard chases off wolves in a page straight out of the Beauty and the Beast storyboards, then they retreat to Gaston’s lounge.

I don’t hate turtlenecks but it’s such a specific man who can pull it off, right? I know Amber agrees because they almost kiss in a beautiful barn. I could pay off my student loans selling reclaimed wood from this barn. And those are law school loans, ok.

Question: Do they put Christmas lights on actual castles?

Well not FAKE, but he was adopted into the royal family in 1990. I assume there’s a rule about that in most royal families? Also with the giant age gap between Richard and Emily, I like to think this is one of those fake adoptions, like when old-Hollywood actresses would get pregnant, disappear for a year, then “adopt” a baby.

Concern: I was surprised by a plot twist in A Christmas Prince.

I never get surprised in Hallmark movies. Advantage: Netflix.

Amber’s so shocked that she uses the words “gosh” and “freaking.”

Comment: I love Amber’s bedroom with the Christmas tree.

When I was a kid, sometimes I used to pretend I was princess Anastasia and had a room like that. Yes, I know it’s actually Grand Duchess. Yes, I willfully ignored the unpleasant imprisonment and execution angles.

Comment: Richard’s so British (or whatever… Genovian?) he pronounces Sophia “Sophier.”

Comment: Amber wears her converse with her formal outfit…

Just like every group of groomsmen in wedding photos, c. 2010.

Question: Do princes really have a wedding ceremony to their country?

That’s more or less what Richard has. Objections and everything. Reminds me of when Dennis Rodman married himself (I’m old).

Comment: Richard’s late father hid the truth in an acorn ornament because nobody can be normal in these movies.

My favorite part is how Richard’s dad knew this would all come to a head at Christmas, and that somebody would decipher the secret clue about acorns, and how nobody would crack open or throw away the ornament before this point.

I also don’t see how a note in an ornament is legally binding. He should’ve just changed the code while he was alive. Easy-peasy.

Comment: The judge or whatever says “Merry Christmas to all,” which is the most Christmas we’ve had in a while.

Question: Why won’t Amber’s editors encourage her to run a piece on this?

Comment: It’s not a romcom unless someone makes a grand gesture at the end.

Richard comes to NY and proposes to Emily. I’m still floored that she works for a publication that thinks this ISN’T a story. He has neither a security detail nor a press following. She accepts.

Comment: A Christmas Prince has one thing in common with Hallmark movies

…. and that’s a couple meeting, falling in love, AND getting engaged all between the start and end of the Christmas season.