I think it’s only appropriate that today’s Man Crush Monday goes out to one of the loves of my life, John Krasinski – this, on the day of his 35th birthday.

You probably know John as the only sane guy working at Dunder Mifflin in The Office. You may also know him as Emily Blunt’s husband, Hazel Krasinski’s father, or the dude who does the voiceovers for Esurance. To me, he is one of those people that always ends up on the short list of my ‘celebrity crushes’ (I definitely don’t have that written down somewhere) because of his charm, wit, and acting abilities. So to celebrate the anniversary of his birth, let’s go over just a few of the reasons why JKras is my Man Crush for this Monday and all Mondays to come.

John was born and raised in Newton, Massachusetts, which is right on the outskirts of Boston. Being that Boston is like a second home to me, I feel like we have a connection – especially since he is proudly wearing all that Celtics/Red Sox garb making him even hotter. Also I have friends who are from Newtown and we may or may not have found out where he grew up/his parents’ house is and may or may not have done a drive by. It’s fine. Not at all creepy.

While attending Newton South High School, John starred a play (which The Office co-star BJ Novak wrote) but it didn’t really make him want to become an actor. He was accepted to Brown University but was put on the wait list so decided to go to Costa Rica to teach English before heading off to college for the second semester. While at Brown, he helped coach a local youth basketball team. I mean smart and philanthropic? Are you real? So he went in as an English major and didn’t get the real acting bug until he was part of a staged reading for David Foster Wallace’s Brief Interviews With Hideous Men, which, full circle, he adapted for film and starred in directed in it in 2009. It was during that reading that he realized he could use his talents to become an actor and writer. He ended up graduated from Brown with honors in English as a playwright.

He’s Charming As All Hell

Salesman Jim Halpert was a charming motherfucker who was just too good to ever stay at Dunder Mifflin, but it all worked out since he got the girl in the end. But that charm and wit is not just Jim Halpert – it comes from John Krasinski. It’s hard to see anyone else in that role because JKras made it what it was. In fact I think both Adam Scott and John Cho were up for the role, so can you imagine how much more different Jim would be if they were cast. If you’ve seen any of his TV interviews, you know how personable he is, and this video is just one example. If you listen closely, you can hear women all over the world droppin their panties during the vid.

He Was Meant To Be Jim Halpert

After he decided to be an actor, John moved to New York City in hopes of being living the dream – being paid to act. He was waiting tables and not really getting any work and got to the point where he was ready to give up. He said he would go on one more audition, and if it didn’t work, it would be a sign that he needed to pick a new career path. That audition was for The Office and the rest is history. John has said that the show has changed his life in more ways than one, not only with all the professional success in his life, but if he had never moved out to Los Angeles to shoot the show, and if the show never took off the way it did, he would have never been able to meet his wife, the lovely Emily Blunt. He was meant to be Jim Halpert, just like Jenna Fischer was meant to be his Pam. ❤ ❤ OTP ❤ ❤

He’s the Most Adorable When He Breaks

With all the hilarious material the folks at The Office were given, it’s nearly impossible to not laugh during a scene. This is evident in all the bloopers from the nine seasons of the show, which I admittedly have watched way too many times. While John is a tall drink of a man, when he breaks, he kind of turns into a giggly little girl. It’s totes adorbs.

He Is Great At Physical Comedy

John wasn’t given a lot of physical comedy during The Office, but if you want to see his lanky self do some hilarious bits, watch License to Wed or Leatherheads. Or just watch him doing this amazing marionette bit over and over and over again.

He Is Great At Drama, Too

Because he’s most known for his role on The Office, people don’t automatically think of him as a dramatic actor. But that will change if you see him in one of my personal favorite movies, Away We Go. I originally saw this movie strictly for him, but I was delightfully surprised to see that it was actually a wonderful film. Plus you can’t go wrong when you share the screen with Maya Rudolph, Allison Janney and Chris Messina.

He Has The Greatest Wife

When your celebrity crush gets married, the only thing that will cure your shattered (delusional) dreams is if the person they’re marrying is equally as awesome. Luckily, John married the equally awesome Emily Blunt who is devastatingly beautiful and talented and funny. And when they’re together, it’s even better. Have you checked out their Ice Bucket Challenges?!

LIKE, CAN U NOT, KRASINSKIS? CAN U ACTUALLY NOT.

He Wins All The Lip Sync Battles

I AM NOT STOPPING WITH THE CAPS LOCK BECAUSE I SAVED THE BEST FOR LAST. YOU MAY HAVE SEEN EMMA STONE AND JOSEPH GORDON-LEVITT CHALLENGE JIMMY FALLON IN A LIP SYNC BATTLE, BUT THE PERSON WHO STARTED IT ALL WAS JOHN KRASINSKI. AND WHEN THEY DID THIS FOR THE FIRST TIME I’M PRETTY SURE I LIT’RALLY SWOONED. I STILL SWOON. MAKE SURE YOU’RE SITTING DOWN BEFORE YOU WATCH THIS.

Welcome back to another installment of Whatareyoudoinghere! Today we will explore the wonderful/dreary world of Six Feet Under. I patiently waited for this series to come on Netflix instant, and since it still wasn’t available by the time summer came around last year (when I do most of my TV marathoning), I illegally streamed it online (judge all you want). Over all, I’d say it was worth all the hype and awards it received, especially since it had one of – if not the best – series finales I’ve ever seen. Anyways, here’s a list of some of the people I didn’t expect to see when I watched SFU for the first time.

Just before he was Dwight K. Schrute, Rainn played a loner type mortician’s apprentice for the funeral home, and had a thing with Frances Conroy’s character. He actually had a lengthy story line, and ended up in 13 episodes. Still a weirdo.

Speaking of The Office, Jenna Fischer had a two episode arc in season 5, when she went out with Rico, the family funeral home’s mortician. Rico didn’t get the hint that she wasn’t that into him… maybe he shouldn’t have invited her to his best friend’s wedding after one date.

I realize the image above might be jarring if this is your first time learning about Adam’s appearance on SFU. It was to me when I first saw it and I still can’t get over it. Adam clearly played a love interest for Michael C. Hall. Yeah, Dexter and Ben Wyatt mackin’ it. And jury’s still out if I find this hot or not… (UPDATE: I watched their scenes again, and the verdict is I am uncomfy.)

Per usual, Bobby played a tough guy who Keith meets while they’re body guards for pop star Celeste (who is featured below). I loved the interaction Keith had with Bobby’s Javier, especially because it’s a good reminder that Keith isn’t your “typical” gay man, and Javier, a typical Alpha male, doesn’t care that he’s gay at all.

Spoiler alert: Harriet the Spy grows up to be a pop star! Here is Celeste, the stereotypical rich, bitchy, superstar. She believes she can get anything she wants… even sex with a gay man. Oops.

Contrary what you may think from this picture, Mr. Jennifer Aniston was not a band geek living in central Mississippi. He plays Brenda’s (Rachel Griffiths) charming neighbor, but his presence poses a problem for both of them since she’s a recovering sex addict… so I mean… good luck Brenda. 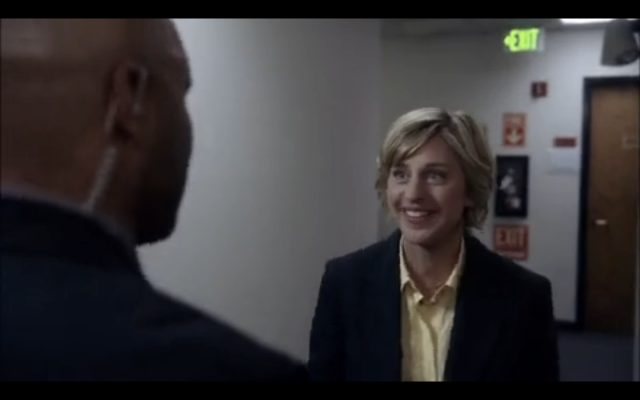 Saved the best for last! Celeste has an appearance on Ellen’s show, and Keith gets into a bit of trouble for using her bathroom while Celeste is taping. But in his defense, he did do his job when Ellen tried to go into Celeste’s dressing room after she said no visitors allowed. 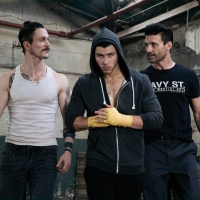