Dancing with the Stars is one of the biggest reality TV shows on the air, and naturally I have to watch it and keep up with it and write any news pertaining the show. But I always forget that the one person who is pretty much the ideal demographic fort this show is my mother. Like suburban, older, women usually like this show. Naturally, she was excited about the season finale. I just happened to be with my parents on the night of this past week’s season 16 finale, and I could only get her reactions to the last hour of the two-hour finale, but they’re still entertaining none the less. It’s like she was betting money on it or something, that’s how into it and stressed she was over the show. I mean, I tend to get emotional about telveision, but it’s so uncharacteristic from her that I was more amused than annoyed. Here are some quality quotes from the Dancing with the Stars shit show. BTW – this was mostly said in Filipino, so this is all a rough translation of what she said…

During Pitbull’s performance: “(Judge) Len (Goodman) better be careful or he’ll break something!”

This man may be 69 years old, but he’s a ballroom champ and legit was helping finalist Jacoby Jones in practice the day before.

When cameras panned over to the audience: “Oh it’s Kristi! Kristi’s there!” (Yamaguchi, because she’s on a first name basis with her, apparently.)

When missing the part where the top four was narrowed down to three, and NFL pro Jacoby Jones was still in the competition: “JACKoby? JACKoby will probably win now!!” – It’s pronounced Jah-CO-bee.

And finding out Olympic gymnast Aly Raisman placed fourth, below Jacoby: “Aly probably cried… Jacoby’s good but not as good as the women. How disappointing.”

After Jacoby’s instant salsa: Jacoby’s mom is too much (she was holding up her own a ’10’ sign from the audience): “They’ll probably give him a 10. That is not right… That’s why he has a lot of fans- because of this touchdown dance.”

On Zendaya’s instant jive dance: “Ohhh her music is so good (It was the classic, Rockin’ Robin).”

On 16-year-old Zendaya’s footwear choices: “See, she can’t dance in heels. She should be dancing in heels. But she’s a kid… she’s not wearing heels.” (She actually wears heels 90% of the time on the show)

On appreciating figure skate alumni in the audience: “Oh Dorothy’s there too. Dorothy and Kristi are sitting next to each other!” (the DWTS mom version of fangirling)

“They need to improve the mirrorball trophy.”

On last season’s American Idol runner-up (and 1/2 Filipino), Jessica Sanchez, who performed: “Ay it’s Jessica!!! She has too much makeup on… she has on too much makeup.”

Still not over Jacoby making it over Aly: “It will be so disappointing if Jacoby wins… See he has the lowest cheers.” (from the audience)

After Jacoby was eliminated, leaving Zendaya and American Idol alum Kellie Pickler in the top two: “There – there it won’t matter who wins between the two of them… even though I like Kellie.”

When Kellie Pickler was named the champion of DWTS: “They’re (Kellie & pro partner Derek) shocked!! It’s because of their performance from last night. Because she’s very artistic… But derek won again – how many is this that he won? She didn’t become the American Idol but she was the Dancing with the Stars champion.”

My mom recently called me to ask if she could give my Disney’s The Lion King comforter to my cousin.

Two things about this inquiry:

D) This is what it looks like (more or less) 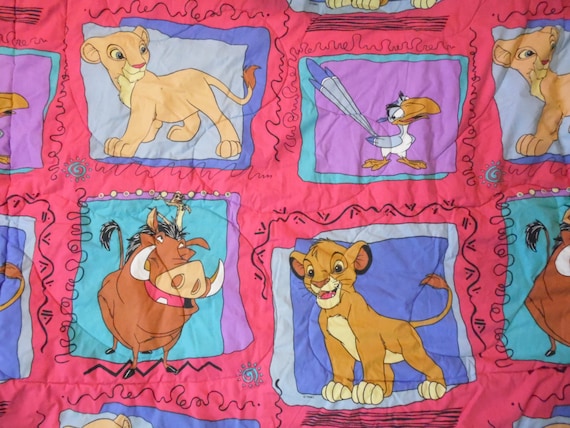 Here’s the thing – I suppose it was nice of her to ask if I still needed it, but… really? Oh, forgot to mention my cousin, who she wants to hand it down to, is about 17 years old. I found this picture on eBay, so she should probs just sell it there instead. I mean she should do that, but she won’t because my parents still use AOL.

Anyways, it boggles my mind to think that my mom would think I could use this any time soon. Perhaps she asked for sentimental value purposes, but honestly I forgot it existed and if I wanted it, I would’ve taken it to fit my bed by now.

To paint you a picture, my bedroom back at home has been relatively untouched since I lived there, which means it hasn’t been redecorated since I was in high school. There is a library of VHS tapes, Backstreet Boys memorabilia, photos of my friends from my youth, and pictures of my favorite celebs ripped out of Teen People magazine.

So as you can imagine, this isn’t the first time my mom has asked if I was still going to use childhood items. Here are a few notable others:

Beauty and the Beast comforter

Kids, long before DVDs, we had these ‘tape’ things that usually required another machine in order to start the movie from the beginning.

Okay, in all fairness, thanks to my recent history working at an invitation/stationery store, as well as interest in crafting, this might be useful. Except I haven’t used those items since circa 1995, so better that it goes to someone who can use it. In related news, I was a dork.

I couldn’t make this stuff up if I wanted to. These were all things told to me during a recent trip home.

– “What do you remember from your childhood?”

All of it? A specific time frame? A particular event you care about? Give me something.

– “Traci doesn’t know how to dunk bread into coffee.”

– “Did Jennifer get married?” Me: “Jennifer Who?” Mom: “Jennifer Aniston.”

Ok, in her defense, a picture of her face flashed across the movie screen, but I’m not on a first name basis with the woman.

Sarah is Molls’ and my good friend who got married 2 years ago, but no one should ever ask this question about anybody.

– As we’re passing by the lingerie section in Kohl’s: “Do you need to buy panties?”

UGHHH. This is clearly self explanatory.

Re: my flight being delayed in deplaning because the jetbridge was malfunctioning so they had to tow us to the next gate over. My answer was obviously no, because it wasn’t the first time I’d ever been on a plane. You know what I was scared of? The two children and three adults in a 5ft radius of me that sneezed and coughed the entirety of my 6 hour flight. It was like the world’s worst game of Minesweeper.

– While on the phone with my aunt/his sister: “He was wearing flip flops… like ‘beach walk’.