“But Traci, The Shawshank Redemption is SO GOOD. I can’t believe you haven’t seen it!”

I’m aware. Oh I’m very aware. I’m also very aware that Pulp Fiction and the Star Wars and the Godfathers are all critically acclaimed, but I haven’t seen those either. It’s basically the reason we have this pop culture blind spot series in the first place. We are aware we’re missing out on a huge part of the pop culture landscape. And we’re working on it.

In the process of “working on it”, I finally got around to watching Shawshank and 2 and a half hours later it was a blind spot no more. Read on to revisit this iconic cinematic masterpiece that I’m officially an expert on having just seen it for the first time.

Prior Knowledge of This film

Prison. Tim Robbins. Someone dies? Supposed to be real good.

Oh right Morgan Freeman. I swear I knew that. 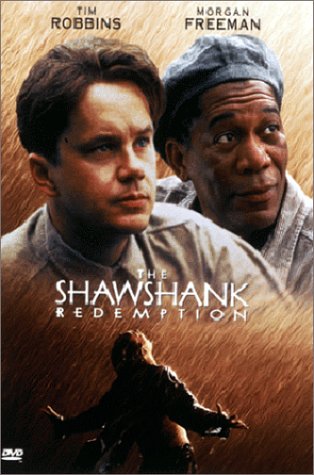 Ohh this is a double death crime of passion? I’m already into this.

The cinematography is great in this! (Apparently so great it was nominated for an Oscar)

Legit question: it’s 1949 but there wasn’t segregation in this prison?

This is nothing like Orange is the New Black. Relatedly, I miss my GF Poussey.

Doctor Romano is one of these prison wardens?! Remember when his arm got cut off by a helicopter in ER?

TIM ROBBINS IS SO TINY AND CUTE. He was only 36 when he made this, which is adult age but he still looks like a little nugget.

Yes Andy making a deal with the officers to drink some beer. That is a true hustler.

Andy gets constantly gang raped by a group of men called the Sisters and it is not fun to watch. I also was not expecting a lot of rape in this film, tbh.

Wait the Captain, after befriending Andy, comes to his defense by beating up the prisoner who was raping Andy? This is oddly heartfelt and I feel weird about it?

I need to read more about prisoners getting Bibles on their way in. Does this always happen? Does it still happen?

This is amazing – now other prison guards are going to Andy for trust fund and financial advice!? He’s practically doing taxes for every employee. And he set up shop in his new office at the library, and he’s really the Taystee of Shawshank State Penitentiary.

Aw that actor guy is in jail! James Whitmore is his name. You know, the old guy from all the things! In Shawshank, his name is Brooks and he’s been in the prison for 50 years, spending most of his days as the joint’s librarian. He finally gets parole and he now works at a Halfway House and works as a bagger at a grocery store and oh my god this is so sad I’m cRYING. It doesn’t end well for Brooks 😦

“The world went and got itself in a big damn hurry.” Brooks

I guess when you’re have prison and got nothing but time, a long con is small peanuts. Andy wants to improve the prison library so he writes to the government asking for money in the prison budget. He doesn’t hear back. He continues to write a letter every single week for SIX YEARS until one day officials finally write back and give him a check for $200, along with a note appreciating his “persistence”. Never give up on your dreams, kids.

This Mozart scene tho.

If this is who Ally McBeal fell in love with in high school I GET IT.

Billy Thomas had an old cellmate who basically confessed to killing Andy’s wife and her lover?! And his name – the robber dude who killed them – is Elmo Blatch. Elmo. Blatch. He has a face that looks like this. What nightmares are made of.

oh my god Andy was using the rock pickaxe thing to dig a hole through the wall to escape and used the posters of Hollywood stars to cover up the hole. Brilliant.

“Andy Dufresne, headed for the Pacific. Those of us who knew him best talk about him often. I swear, the stuff he pulled… Sometimes it makes me sad, though, Andy being gone. I have to remind myself that some birds aren’t meant to be caged. Their feathers are just too bright and when they fly away, the part of you that knows it was a sin to lock them up does rejoice, but still, the place you live in is that much more drab and empty now that they’re gone. I guess I just miss my friend.” I GUESS I JUST MISS MY FRIEND. RED! YOU’RE KILLING ME

Seriously Red/Morgan Freeman goes into his parole meeting and literally says “I don’t give a shit” then gets approved after years of being declined. Is this what I should do in job interviews?

When he gets let out he lives in the same room as Brooks, has the same job bagging groceries. It’s like late 1960s early 1970s now? Again, isn’t there segregation?? Like he’s being let out in a world where he can’t drink from the same water fountain as white people AND he’s an ex-con.

That’s probably why Red was like eff this, I’m gonna go follow this scavenger hunt Andy is leading me on. It takes him all the way to the oak tree in Ohio Andy talked about in prison. Red digs out a box with money and a letter from Andy, telling him to meet him in Zihuatanejo, Mexico, a place Andy told him about long ago. And so Red continues.

RED, 2 HOURS AGO: “Hope is a dangerous thing. Hope can drive a man insane.”

ANDY, IN HIS LETTER NOW: “Remember Red, hope is a good thing, maybe the best of things, and no good thing ever dies.”

RED, ON THE FINAL LEG OF MEETING UP WITH ANDY: “I find I’m so excited, I can barely sit still or hold a thought in my head. I think it’s the excitement only a free man can feel, a free man at the start of a long journey whose conclusion is uncertain. I hope I can make it across the border. I hope to see my friend and shake his hand. I hope the Pacific is as blue as it has been in my dreams. I hope.”

“Get busy living or get busy dying”, my new tattoo.

So the state of the world is kind of a real big bummer right now, huh?

Missiles are being shot left and right, the plots of Homeland and Scandal are becoming more like non-fiction with every passing day, and Kendall Jenner somehow thought she could save society with one can of Pepsi. If you’ve been feeling downtrodden over the past few days (weeks/months), use this weekend to regroup and remind yourself that there are still good people in the world. There is most certainly humanity left – but we just have to remember where to find it.

Here are some movies to make you feel better about the world, or at least escape from reality for a few hours.

Maybe it’s because it takes place in Paris. Maybe it’s because the dreamy color scheme. Maybe it’s because it’s all in French and you have to really pay attention to the subtitles. But watching Amelie is being awake in an amazing dream for 2 and a half hours. The charming Amelie, played by the even more charming Audrey Tautou, secretly helps people who are living not-so-happy lives. As a result of her do-gooding, she is ultimately rewarded with love of her own, and it reminds us a little kindness can go a long way.

Excluding what’s arguably the saddest ever Pixar opening scene ever, Up is actually one of the most UPlifting animated movies ever. Anytime an elderly person befriends a young nugget, it really gets to me. Carl and Russell are generations apart, but a once-in-a-lifetime adventure changes their lives forever, and teaches us that we can always learn new life lessons, no matter how young or old we are.

For months now, it feels like America has been split into two sides, with very different views on how to make the country “great”. That divide isn’t just between strangers, co-workers, and neighbors, in a lot of cases, party lines are drawn within families, and it’s often hard to reconcile that these are the people you share a bloodline with. In Little Miss Sunshine, we are taken into the world of a gay and self-harming uncle, a silent son, a drug-addicted grandpa, a failed dad, and and impulsive mother, who all rally around the youngest daughter who has dreams of winning a beauty contest. They don’t get along all the time and fight constantly, but at the end of the day, they’re all still family who may not necessarily win, but it’s the fact that they do it together that counts.

When the impossible seemed just that, these ladies made it possible. These real life women were literal geniuses who shaped the history of America and astroscience (is that a thing) as a whole, and have been greatly underappreciated for years. But they persevered through racism and misogyny to become some of the greatest scientists/mathematicians the world has ever seen. Basically any story that centers on overcoming adversity should give you hope that things will always get better.

It wasn’t until recently that I watched Shawshank for the very first time, and let me tell you – it lives up to the hype. Tim Robbins plays a decent man who is falsely charged with murder, and while in prison, he befriends Morgan Freeman’s character Red, and they form a lifelong (and tender) friendship spanning years. The movie not only makes us realize that we have more in common with each other than we think, but that you should always have hope, even in situations when hope seems unattainable.