When my parents put the family home on the market during my freshman year of high school, they knew it was going to be a tough sell. The location could best be described as “drug dealer-adjacent.” The neighborhood even had a nickname – and not a cute New York-y one like LoMoFi or The Fishmonger District. No, it was called The Fatal Crescent, because if there was one thing we loved in the inner city, it was comedic nods to Mesopotamia. They knew that everything had to look amazing during the open house. They almost got it right, until they forgot to remove the laminated Mets poster that covered the buckling section of the wall in the attic bedroom. [I think it somehow explains a lot about me that all of my childhood posters were laminated. NO I CANNOT GET A GRIP. Getting a grip isn’t an option when you’re raised to painstakingly laminate Rose and Jack’s party in third class.] Imagine our dismay to come home and find that a prospective homebuyer had taken down the poster to get a closer look. I mean, God. That shit was loadbearing.

Through attending weekly open houses as a homebuyer, I’ve learned that my parents weren’t alone: a lot of folks just can’t get it together. So, as I get increasingly weary of comparing square footage and furnace attributes (who in the fresh hell has OIL HEAT?), I’m taking an almost anthropological interest in home decor instead. Sure, every family is different – some of them cover their buckling walls with Yankees posters, which may not even be laminated – but I’ve noticed some common decor styles:

I’ve written before about my fascination with Mormon Mommy Bloggers, mostly for their effortless ability to do what I cannot: to exist as a generally appealing person who is also a lady. The Mormon Mommy Blogger decor style can be practiced by anyone — even if you aren’t Mormon, even if you aren’t a mommy. You need a bright and cheerful color combo, bird appliques, stripes and chevron, and tons of shit from Etsy. Just go to Etsy on a day – any day at all – hit up the homepage when they feature items that go together, and buy it. Then go to Anthro and buy a bunch of their stuff too. Most items you get will have the word “whimsy” or “tribal” in the description, which makes sense because you are part of the most whimsical tribe of all (the Church of Jesus Christ of Latter-Day Saints).

Some people aren’t able to get through their daily life without signage telling them what to do and where. They may forget to Live, Laugh, and Love if it isn’t written down somewhere. In the kitchen, there is a big sign that says “EAT.” Over the bed: “DREAM”, or, for more whimsical people (but not, like, Mormon-whimsical) “Always kiss me goodnight.” In the family room: “FAMILY.” I’m sort of surprised their bathroom wall doesn’t proclaim “POOP” in Helvetica.

I might do this in my house, but I’ll make it a little more realistic. Kitchen: “REGRET.” Bedroom: “Always spend a half-hour deciding what to fall asleep to on Netflix.” Family room: “DVR.”

Decorating comes naturally to some people – and to others, The Pottery Barn catalog comes quarterly. Close enough. These folks will buy a coffee table, and also buy the exact flat bowl, weird twine ball, and candlestick holder that appear with it in the catalog. These houses look nice, but I’d like to see what these people do if you give them an off-book vase or picture.

No, not the 1920s, though I wouldn’t mind seeing a few more art-deco homes. I’m talking about being over the age of 25 and having never bought furniture on purpose. These people have the plaid couch from their college house, the IKEA desk from their first apartment, the weird rococo chair from their nana’s den, and the dining room table that their parents replaced. I’ll admit that my furniture comes from all kinds of sources, but I make an effort to paint or upholster things so that it all goes together. Mid-20s Pastiche is more of a stylistic melting pot.

I’ve been to a few houses that are very clearly Men’s Houses By Men Who Would Like You To Know They Are Men. Walls are painted a carseat gray. Accents are in some shade of red. There might be black bedding. There’s definitely chrome, and possibly framed car photos. The homeowner definitely uses some sort of hair wax. Ladies, if a gentleman brings you back to a house like this, it’s always okay to make an excuse to leave, because otherwise you might get killed. I don’t know why, but this style sets off my creep-o-meter.

I enjoy being a girl!

This is the female analog to the car interior style – in fact, the houses in these two styles are essentially the adult version of the Barbie/Hot Wheels Happy Meals. You can expect the following: Animal print. Hot pink. Wine glasses with maribou on them. Wall art celebrating martinis. Some sort of artistic depiction of shoes.

This woman doesn’t have a tinted black and white poster print of little girls she doesn’t know with caption “girls just want to have fun!”… but she did in college. There’s a very real possibility that she was in a sorority, but make no mistake — not all sorority alums are like this. She knows exactly which Sex And The City character she and her friends are (she’s “a Charlotte,” but probably more like a Season 1 Shoshanna.)

This goes beyond babyprooofing – these people are actually afraid of their children. Every surface below six feet is completely devoid of ornamentation. Furniture is bolted to the walls. Bills are stored in something you have to lock. Crayons and markers change locations as soon as kids figure out where they’re stored in case they do some rogue wall coloring. Furniture is covered in sheets (“the one time we took off the sheets Emma-Lynn spilled a gallon of chocolate milk on it”). Floors are covered in dropcloths (“sometimes Ayden trails paint behind him – house paint.” Ayden is a baby). Light switches have duct tape over them (“otherwise Kayler likes to play with the lights” Kayler is over the age of 7). The kitchen has a lock on it. Everything has a lock on it. These people cannot have nice things because their children will ruin nice things (their children are not Mormon). I picture parents setting up the Frozen DVD then slowly backing slowly out of the room, occasionally opening the door a crack to throw in bags of fruit snacks then slamming it so the feral children don’t nip at them.

Hummels. Camels. Precious Moments. Lladro. Bells. Teaspoons. Ashton-Drake plates. Madame Alexander dolls. Tchotchkes representing the land of your ancestors, even though they immigrated in the 19th century. These people never met one of something that they wouldn’t rather have 30 of. On the plus: they’re probably super easy to buy Christmas and Birthday presents for. 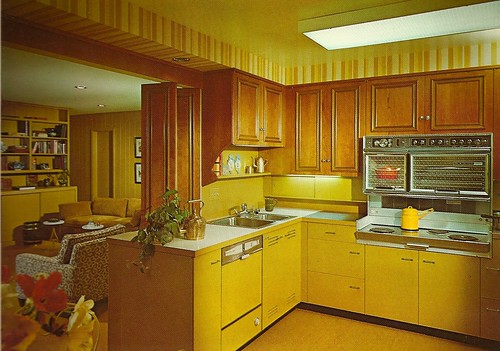 As in: Set It And Forget it! These people decorated their house one time, in the past. These are the best houses to go to because you feel like you’ve entered a time capsule or a living history museum. The classic crockpot house has 60s or 70s decor – big yellow flowered wallpaper, shag carpeting, avocado appliances, a bathroom fit for one of the Pink Ladies. But as more baby boomers move out of the houses they raised their kids in, sometimes you see an 80s or 90s house, with Laura Ashley curtains, light pine tv cabinets, and geese or ducks wearing bonnets.

All The World’s A Stage

This house looks awesome. The decor is current but not so trendy that you can’t see living there. It’s natural enough that it doesn’t look like a catalog page. But look closer – is that plastic lettuce in the kitchen? Yep – the house has been staged.