Listen. I think we’re all on the same page when I say while Saved by the Bell is one of the most beloved TV shows of kids who grew up in the 90s, it’s not the best in terms of, say, storytelling or acting. It’s a show for teens and tweens, and in cases like myself, children under the age of 10. But because it was geared towards a younger crowd, they could get away with more ridiculous storylines, something that they wouldn’t have been able to get away with on “adult” programming.

That being said, we’re back with another installment of our Doing Lines series (you can catch the other ones here), and this time we’re heading to the Pacific Palisades and seeing what kind of trouble the kids got into during their five-year stint in high school.

Fun fact: the image on the TV is an exterior shot of John F. Kennedy Junior High School from Good Morning, Miss Bliss!!

Screech gets struck by lighting and suddenly has a superpower where he knows what will happen before it happens. Also, he acquires an afro.

Zack decides to help Screech get a girlfriend but no one is willing to go out with him, so Zack dresses up as a girl named Babmi and goes on a date with Screech, but he starts to like Bambi frreal.

Episode 8 {Cream for a Day}

Screech accidentally invents a zit cream in chemistry class, which gets rid of pimples overnight. Kelly wins homecoming queen but uses the cream the night before – too bad the cream makes everyone’s face maroon.

Zack leads the gang in a project for business class, in which they have to create and market a product. They choose an item called Buddy Bands, but when their company becomes successful, the power gets to Zack’s head and Kelly, Jessie and Slater decide to make their own friendship-related item, Love Cuffs. Also, this timeless commercial.

Episode 12 {The Mamas and the Papas}

The gang participate in a project to simulate a domestic marriage, and everyone gets paired up. Jessie and Slater, Zack and Kelly (foreshadowing!!!) and Lisa and Screech. I think the most importnant thing to remember from this episode is that Lisa ALL OF A SUDDEN is allergic to Screech. Because she keeps sneezing and scratching everytime she’s close to him, Mr. Belding separates them and Screech becomes Zack and Kelly’s son, while Lisa goes over to the Slater/Spano family. Lisa’s allergy was never spoken of again.

Zack learns about subliminal messaging and attempts to trick Kelly into going to the dance with him with a sneaky cassette tape. She finds out and decides to turn the tables on him. Ah the troubles of being a teen heartthrob.

Mr. Belding wants to set up a meeting with Zack and his dad because Zack’s been failing his classes. Zack doesn’t want his father to find out, so “rents” an actor to be his dad, because, Los Angeles.

After watching The Unauthorized Saved by the Bell story, we learned that the writers asked the cast what their talents or hobbies were, and incoporated their answers to the scripts. TAT used to be a beauty queen, which explains the Miss Bayside pageant, but can/do real schools actually do this?

It’s the infamous ‘I’m so excited’ episode. And honestly, my problem isn’t with Jessie’s ridiculous addiction to caffeine pills, it’s that a trio of teens from the Pacific Palisades, and called Hot Sundae, easily got the attention of music executives. They were on the fast track to stardom until Jessie’s freakout!

A photographer comes to Bayside and “discovers” Kelly after Zack and Screech secretly take pix of the girls in swimsuits and make a “Girls of Bayside calendar”. The photographer gives Kelly the opportunity to go to Paris to be a model. Zack isn’t okay with this. Is this photographer somehow in cahoots with the music execs who wanted to sign Hot Sundae?

This is truly one of the more ridiculous storylines to ever come to Bayside. A tabloid is offering money for photos of real aliens so Zack and Slater dress Screech up as an alien and film him being creepy at the school to fool the tabloid. Except a special agent with the government is convinced Screech is a real alien.

Zack finds out he’s part Native American and to learn more about his roots, befriends a man named Chief Henry who has a great impact on Zack. Meanwhile, Jessie finds out her ancestors used to be slave owners and spends the rest of the episode ‘apologizing’ to Lisa. I’m convinced at least one scene in this episode is slightly racist.

Kelly’s parents leave their baby son with Kelly who has to bring him to school (because, hello, she’s a teenager), but when she has to take school pictures, she’s forced to leave her baby brother behind with the gang. Honestly, why didn’t Mr. Belding or any of the teachers or any of the students not notice baby Billy and alert social services or something??

Mr. Belding reluctantly lets his surfer dude brother Rod serve as a substitute teacher and immediately all the students flock to him because of his laid back nature. Rod suggests taking the kids on a white-water rafting trip, but just before they leave, Rod tells his bro that he can’t take the kids because he has a date with a girl – and Zack overhears the whole thing. Mr. Belding is left with covering for Rod but they end up having a lot more respect and appreciation for their principal at the end. Also, the title of this episode sounds super gay. Like literally gay.

The annual chess competition between Bayside and Valley gets ugly when Valley plays dirty and steals his lucky beret. In retaliation, Zack and Slater decide to switch Valley’s best chess player, a Russian exchange student, with Zack in a wig. I guess I never realized it until now, but these kids really were into disguises. Must have kept the local wig store in business. 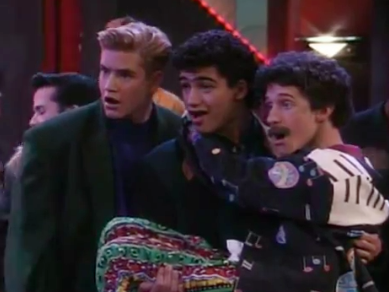 Zack meets at girl at The Max named Danielle who is a student at USC, so naturally, Zack pretends to also be a college kid who’s majoring in photojournalism. He agrees to meet her at The Attic, a night club for kids 18 and over, which obviously requires fake I.D.s. While at the club, Zack, Slater and Screech spot Jeff, Kelly’s boss (aka the skeezebucket Kelly wanted to date so she promptly dumped Zack) kissing another girl. Zack tries to tell Kelly what he saw at the Attic but didn’t believe him, on account of jealousy. This episode is a reminder that the gang basically lived out things I would never have the balls to do as a teen. Fake IDs and sneaking into a club? I’d much rather stay in and watch The Baby-Sitters Club Movie on repeat.

In one of those *the more you know* episodes, this one tackled the environment and saving it, etc. Oil is found in the school’s football field, and the kids go crazy thinking of what they’ll do with all the money. However, they soon find out that ~getting rich comes with a price~

The gang fails at buying U2 concert tickets, and when they accidentally find a shoebox full of cash, shenanigans ensue. This never happened to me when I went to the mall. The only thing that went down was me trying to avoid eye contact with anyone I went to high school with.

Jessie gets a 1205 on the SATs while Zack miraculously scores a 1502, sending overachiever Jessie into a tailspin. For you kiddies that aren’t American or took the SATs after 2005, a perfect score on the SATs during this time was a 1600. So naturally, Jessie is as confused as all of us to learn of Zack’s score, especially because this is a kid who puts no effort into learning or anything relating to academia.

Episode 21 {No Hope With Dope}

Super megahot Hollywood actor Johnny Dakota chooses Bayside as the location for an anti-drug commercial but the catch is that Johnny himself uses drugs! A celebrity doing drugs?! Actually I think his drug of choice was pot UGH EVEN WORSE.

This is personally one of my fave episodes, and it seemingly comes out of nowhere. Casey Kasem returns to give a Behind the Music-esque documentary about Zack Attack (the band all the gang is in, obvs), and their rise to fame from a garage band to superstar band. It was never explained how they all suddenly learned how to sing and play instruments.

Zack has a crush on a girl who works at the mall, and later finds out she and her dad are homeless. Again, this is one of those *very special* episodes that makes you think twice before you judge the girl working at a department store.

The students take over for the teachers – Zack becomes principal for the day. And hangs up posters of Paula Abdul and Guns n Roses next to each other.

Screech makes a spaghetti sauce he sells on TV, and Punky Brewster pretends to fall for him to get his recipe. They even come up with a fun catch phrase that I still have stuck in my head after all these years:  “The sauce you can have, but the secret, she’s a mine.”

The gang decides to make a video yearbook instead of the traditional one, and Zack’s plan to use the girls’ videos as a dating service backfires when Kelly starts receiving a bunch of calls from rando guys.

The gang is all in a rap version of Snow White and the Seven Dwarves but when Jessie and Zack find out they have to kiss in the final scene they get all weird about it and question their feelings for each other, and subsequently fall out with Slater and Kelly in the process. And they take the drama to the stage. Get it??

An earthquake hits Bayside and Zack is stuck in the elevator with Mr. Belding’s pregnant wife who goes into labor. Reminder Zack is an 18 year old Senior in high school who just delivered his principal’s son.

The school holds a contest for who can write the best school song (BTW do schools actually do this? Our high school has been using the same ‘school song’ since the 1900s and includes the words ‘rev’rie’ and ‘retrospection’). Zack is determined to win the contest so he can be remembered for something positive before he graduates, as opposed to his scheming ways. But it’s those scheming ways that brings him down in the end. Friendly reminder that I tried to convince my 8th grade music teacher that we needed to sing this song at our graduation. I lit’rally taped the song on a cassette and brought it in to school.

8 thoughts on “Doing Lines: Saved by the Bell”