It’s October, and I am continuing to tackle my Halloween movie pop culture blind spots. As a person who loves Halloween but hates to be scared, it’s a chore. A neat trick I learned with Teen Wolf is that if a movie has the word “teen” in the title, it’s probably not that scary … and with that, I delve into Teen Witch.

What I Think It’s About: An ’80s teen learns that she’s a witch, like in Halloweentown or Twitches or Worst Witch or Harry Potter. She raps at a mean boy. That part, I HAVE seen.

Hulu short description: A high school student who is a descendant of bona fide Salem witches uses her magic to snag a football star as a boyfriend.

Okay, I’ve mentioned before how far down the Salem Witch documentary/podcast/google hole I’ve fallen, so this sounds pretty cool. Except for the second half, anyway – even a dopey teen has better uses for magic powers than “snagging a football star as a boyfriend.”

The movie opens with 80s sexy smooth jazz saxophone, which I hate. Two teens hang out in blue lighting on a rooftop. The first FOUR minutes look like any generic music video of 1989. It’s just a dream, we learn as Teen Witch wakes up in her Laura Ashley bedroom. 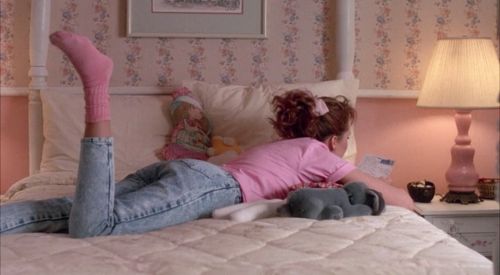 The family all sits around the breakfast table at the same time, being formal at each other.

Teen Witch’s best friend has dark hair and is 100% the person I thought was the Teen Witch based on the rap clip I’ve seen.

The cheerleaders sing and dance ‘I Like Boys’ in the locker room. THIS IS A MUSICAL?! This is a musical! I didn’t know.

I have so many things to say about the I Like Boys sequence, none of them probably search engine-friendly. You don’t strictly see anyone singing it, they just sort of prance in the locker room, having antics. As gals do, while telling you over and over that they like boys.

I probably don’t have to say this, but the ’80s teen hunk Louise is obsessed with is named Brad.

Louise goes to a creepy unpainted Victorian house to see someone named Madame Serena. The Victorian House trope is always interesting to me. By, say, the 1950s an 1890s Queen Ann Victorian was already known as a creepy witch/ ghost house. But in 2017, a house the same amount old (built in the 1950s) isn’t considered creepy. Our scary movies don’t involve a foreboding ranch house.

Madame Serena is a small psychic woman with a high voice, like in Poltergeist. She refers to Louise’s “cute little Punky Brewster face.” Ha.

Is Louise’s little brother going to turn into a rat ever? I feel like that happens in a lot of these kinds of movies.

Casting breakdown: Twerpy Younger Brother Who Gets Turned Into A Rat

An elderly health teacher has the kids chant ‘condom,’ which probably doesn’t happen in public schools? Or does it??

I think the only thing in the school’s soda machine is regular Coke.

Louise’s vest from her mom is “dorky” but with 28 years’ perspective, it doesn’t look any worse than anyone else’s outfits. Her dad has a big poinsettia sweater.

Wait but the nerd assuming Louise wears glasses, when she does not, is my whole life. Does this happen to everybody?

He’d be the hot friend on a CW series today.

“You think you’re hot stuff because you went to a dance. Nobody wants to date you because you’re a dog.. a dog… a dog!” That’s what kid brother says in that wavery scary voice before he TURNS INTO A DOG. I know I said rat before but I feel like I was close.

There’s a witch yearbook – “new faces of 1632” – and I choose to find it unrealistic that (1) they’re photographs and (2) not in 1600s-style clothing. The witch part is fine. Louise and Madame Serena are both in there. Does that mean all witches are reincarnated? Or they’re both 400 years old but went dormant and lost their memories for a while? I have questions.

Surely you all realized this already, but Madame Serena IS the actress from Poltergeist! I haven’t seen it since I was 7, but I was so certain it was her I had to IMDB it. What a very specific role to be typecast in.

It’s been almost an hour but I just realized that the character breakdown for Louise was absolutely “Molly Ringwald type.”

Louise has gone full witch, with love spells and a poppet.

Anyway, Louise voodoo poppets her awful English (?) teacher, a man whose classroom includes some weird stage with a desk and bookshelves on it, and who openly torments Louise every class. She makes him strip. ‘S funny.

Mean Teacher gets poppetted through a carwash on foot while the song “All Washed Up” plays, but the beginning of it sounds so much like Bad Romance. So much!

Ladies and gentlemen, the moment we’ve ALL been waiting for:

I thought there would be more context but, no. Also how I said it was a musical earlier? There was really just the locker room I Like Boys scene, then this. It’s like if I dreamed a kind-of musical about a Teen Witch, and an hour into the dream I realized I forgot to do songs.

Polly’s my favorite. It didn’t sound like the guy’s voice was coming from him?

Louise gets an ’80s perm, AKA she looks exactly like me if I air dry my hair, and a tapestry vest and a flouncy skirt. Hot stuff, indeed. She’s like Tiffany now. There’s a montage and all her outfits are super cute now.

The Sexy Sexy Saxophones are back, but this time Louise isn’t dreaming. She kisses Football Brad near a plaster-and-lathe wall.

Louise accidentally (?) magics the lead of the school play into breaking her leg, thus getting the lead role. I just thought witches had more control over their magic? Like with spells and wands. Louise is running this operation on poppets and hormones.

I’ve been checking how long there is left every 15 minutes or so.

Never have I ever seen a school dance scene that felt like it was the appropriate length. Like real school dances, it just goes on and on and on with very little happening.

In 1989, the bigger your hair was, the lovelier you were. Must have been nice to have such a clear formula.

I thought we’d get more clarification on the popularity-doesn’t-matter thing, but like Grease the messaging is not all that great.

To that end: the closing theme is “I’m gonna be the most popular girl. Gonna change my hair and makeup, soon you’re gonna see…”. There was nothing spooky in this whole movie – it was way too un-scary, actually – but this theme song would be PERFECT playing at the end of a dark, Black Mirror-y study of popularity at all costs.

Takeaway: I really like a lot of kiddie ‘scary’ movies, and I think witches are the coolest thing ever, but this didn’t 100% do it for me. Judging by my love for Hocus Pocus, I probably WOULD have liked this if I watched it first as a kid, though. It’s almost like it needed to be more witchy, or at least for the witch to have a more interesting objective than Football Brad.

EDIT: It’s been like 3/4 of a day since I watched Teen Witch and I find myself liking it more and more. Maybe it’s magic after all.