Curly Sue is having a MOMENT. Alisan Porter is back on TV, the movie is streaming on Amazon Prime, and believe it or not, the 90s sets and outfits look surprisingly fresh. All of that meant that we were due for a rewatch – but don’t worry, we have some comments, questions, and concerns about the whole thing.

Concern: It’s been so long since I’ve seen this movie, it almost feels like it should be a Pop Culture Blind Spots post.

Curly Sue was a mainstay of early 90s HBO, and I used to watch it constantly. But that was 25 years ago, and I was a little kid. What I remember: a shyster pals around with a little girl, cooking up schemes. Was her name even Sue? Can’t remember. It was like a John Hughes-y take on Paper Moon, but set in 1991.

Comment: Curly Sue is now a contestant on The Voice.

Alisan Porter, AKA Curly Sue, wasn’t just another talented tot – she’s a talented adult, too. Of course, if you watched Curly Sue on regular rotation in the early 90s, you won’t be surprised.

Comment: Orphans from the late 80s/early 90s had all the best swag. Like. I’m glad I have parents, but otherwise I’m pretty jealous of that sweet orphan swag

Curly Sue has this awesome bag covered in pins and ribbons, Punky Brewster had mismatched shoes and the coolest bedroom ever.

Comment: Somewhere in my brain, the instrumental Curly Sue theme has been lying dormant just waiting for me to rewatch.

Question: Is the opening sequence ever going to end?

We inventory Curly Sue’s bag for fully 3 minutes, which is longer than I spend packing for a cross-country trip.

Comment: Law offices were so steely during this era.

Concern: I mentally refer to James Belushi’s hair as a “nice mullet,” then I catch myself.

Not sure if that’s my low standards for early 90s fashion, but it’s surprisingly non-ratty for a mullet. It looks freshly shampooed and brushed. He nurtures it.

This is Belushi instructing Curly Sue to knock him upside the head but ALSO a primer into the psychology of abuse so IDK about you but I’m having a great time.

Question: Were there security cameras in 1991?

Curly Sue and Belushi stage a fake car/pedestrian collision in a parking garage (that’s why Curly Sue had to hit him), but I think in ’91 a closed circuit camera would have cleared that up. Weren’t we all into hidden camera shows during this era? There was no internet; America’s Funniest Home Videos and Candid Camera were our internet.

Concern: Steve Carell is a vampire

Steve Carell, impervious to the forces of time and age, plays a fancy restaurateur. Someone please hunt down Carell’s Civil War daguerreotype?

Look at these people in their money-colored music hall dressed like they’re definitely at a benefit concert for some sort of Country Day School.

Comment: Calling it: the icy blonde lady who got scammed is going to marry Belushi and be Curly Sue’s new mom.

I think this because Belushi told C.S. that’s who she should hope for as a mom, and because the icy blonde lady looks pensive while she thinks about C.S. at the money-colored music hall.

Concern: a crappy man steals Curly Sue’s ring at the homeless shelter and pawns it.

I just kind of feel like if it was worth money, Belushi (AKA Bill Dancer) should have sold that before making Sue beat a grown man to score a free dinner. Is all.

Remember when cell phones themselves were a punch line, and the joke was that the person who owned it was a Mr. Burns-style mega-millionaire? A phone rings in a restaurant, everybody instantly grabs their giant Zach Morris phones and raises them to their ears. It goes without saying, the restaurant is fancy… 1991-fancy.

Comment: How you know you’re rich and important in movies: an assistant runs alongside you telling you calls and appointments that came in for you.

Question: You know what movie this isn’t?

Answer: Life with Mikey.  (It turns out all of the scenes I thought I remembered from this movie were from Life With Mikey.)

Comment: I will never be rich enough to have a 1991-Rich bathroom.

I love the unnecessary floor lamp and the child-sized house plant.

Question: Did the trailer say this was a movie about going “from rags to riches – and back again!”?

Because that seemed like a really popular trailer tagline for a while there.

Curly Sue asks – in the style of a Newsie or a background orphan from Annie – why Gray doesn’t have children because she “has enough dough for lots of them.”

More importantly, why doesn’t Gray have children when she has a fully decorated LITTLE GIRL’S BEDROOM off of her bedroom?

(Also, Gray doesn’t have children because like the sterile modern art in her chilly law practice, she is an empty vessel.)

Comment: the makeup department is having a blast doing the egg on Belushi’s head; I can tell.

Really going for it.

Question: Why is Gray’s boyfriend trying to go to sleep in the Haunted Little Girl Bedroom in the middle of the night, anyway?

Comment: Gray’s kitchen really holds up because 1991 is so fancy that its kitchens are from the future.

Some Chip & Joanna shit right there.

Question: Do you know who I love?

Gray’s surly housekeeper, who dresses like a youth from Sister Act 2. “I don’t usually smoke cigars. My friend had a baby.”

Comment: Belushi isn’t Sue’s dad, but he “got her from a one night stand.”

I don’t know about you all, but I’m going to need way more info.

Question: Is Gray the Miss Honey of this movie?

She makes a pitch to Curly Sue that somebody’s going to have to tell Sue about girl stuff or whatever, and Gray would make a great fake mom, I think.

Question: How long do you have to go to school to be a lawyer?

The surly housekeeper says lawyers go to school for 20 years, which I guess is true if you’re counting preschool? IDK I’m a juris doctor, not a math doctor.

I know, you know: 1991 was fancy. But more importantly, Gray has a saleswoman present her with different things she might like, which Gray then approves or vetoes. Then they box everything up for her in neat parcels. Maybe I just need to go to better stores.

(When I was about 4, I loved to read a story from the 1950s about a little boy whose mom has a shopgirl at the department store find him new summer clothes – red and blue sandals, plus a red and a blue “nice, cool playsuit” – and has them wrapped in paper and tied with string. It all sounded so tidy. Before we had words for the concept, that was 100% my aesthetic) Like Grey Poupon, the nice mustard that was fashionable at the time. I’m not going back to change it.

Question: How much fabric is in this wedding veil?

You could prevent zika in 3 brazilian villages with this veil

Needless to say, the bride’s name is Tiffany.

Concern: Grey is getting involved in Belushi & Sue’s cons very quickly for a chilly attorney made of stainless steel and shoulder pads.

Concern: What if this is all a long con on Grey? I’ve grown to really like her and I’d never forgive Belushi.

I’d forgive Sue but only because she’s so freaking cute. Also, I’m not feeling any chemistry between Grey and Bill Dancer, like any at all, and I usually ship everything. Their relationship feels exactly like what it is, a shyster staying with a lawyer for a bit because she hit him with her car.

Comment: Maybe every movie I love is just a variation on Annie.

Question: If Belushi is so good at piano, and Sue’s such a good singer, why don’t they busk? Or get jobs?

I know it’s garbage to ask why homeless people don’t “just get jobs” but these are fictional people and I do wonder.

Comment: Grey’s boyfriend (?) calls in an abuse and neglect complaint on Belushi and I gasp “no!” out loud.

John Hughes always made you care about his characters, who were often really, really terrible parents/legal guardians. 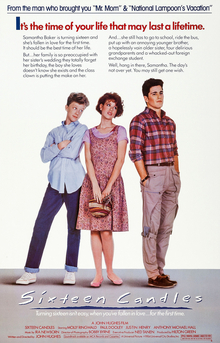 Concern: I’m very distressed about Sue getting seized by CPS, but also, on paper Belushi is an unfit parent.

Ward Of The State hair.

Question: Was a person from the future involved in this production?