We’re smack dab in the middle of wedding season, y’all, and last month, I gave out a few tricks on how to make it through these next few months without becoming a bitter betty and exhausted to the max with our Wedding Season Survival Kit. I mentioned that one of the helpful tips is to dress to impress since all weddings these days are highly documented. You can either go the route of using something you already have and mixing and matching, or borrowing pieces, like a site such as Rent the Runway.

I used RTR for the first time this past weekend for my friend’s wedding and I wanted to share my experience (and a few tidbits from my other friends) on using the site, JIC you want to kick your wedding game up a notch this year!

I started looking at dresses about two to three months before the big day, and made a shortlist on the website by ‘hearting’ the dresses I liked, this way I could easily go back and look at not only the potential dresses, but any accessories as well.

*I consulted with a couple friends about my top few choices, and I wish there was an easier way to share the shortlist with friends and have them comment on which ones they think would look good.

I settled on this Tango Tux Romper by Twelfth Street by Cynthia Vincent, which was $325 retail, and cost me $50 to rent. The wedding I attended was in Malibu overlooking the beach, and I felt the romper was fun yet formal enough for the later afternoon/night event. You have the option of renting an additional size for free, just in case the first one you pick doesn’t fit. 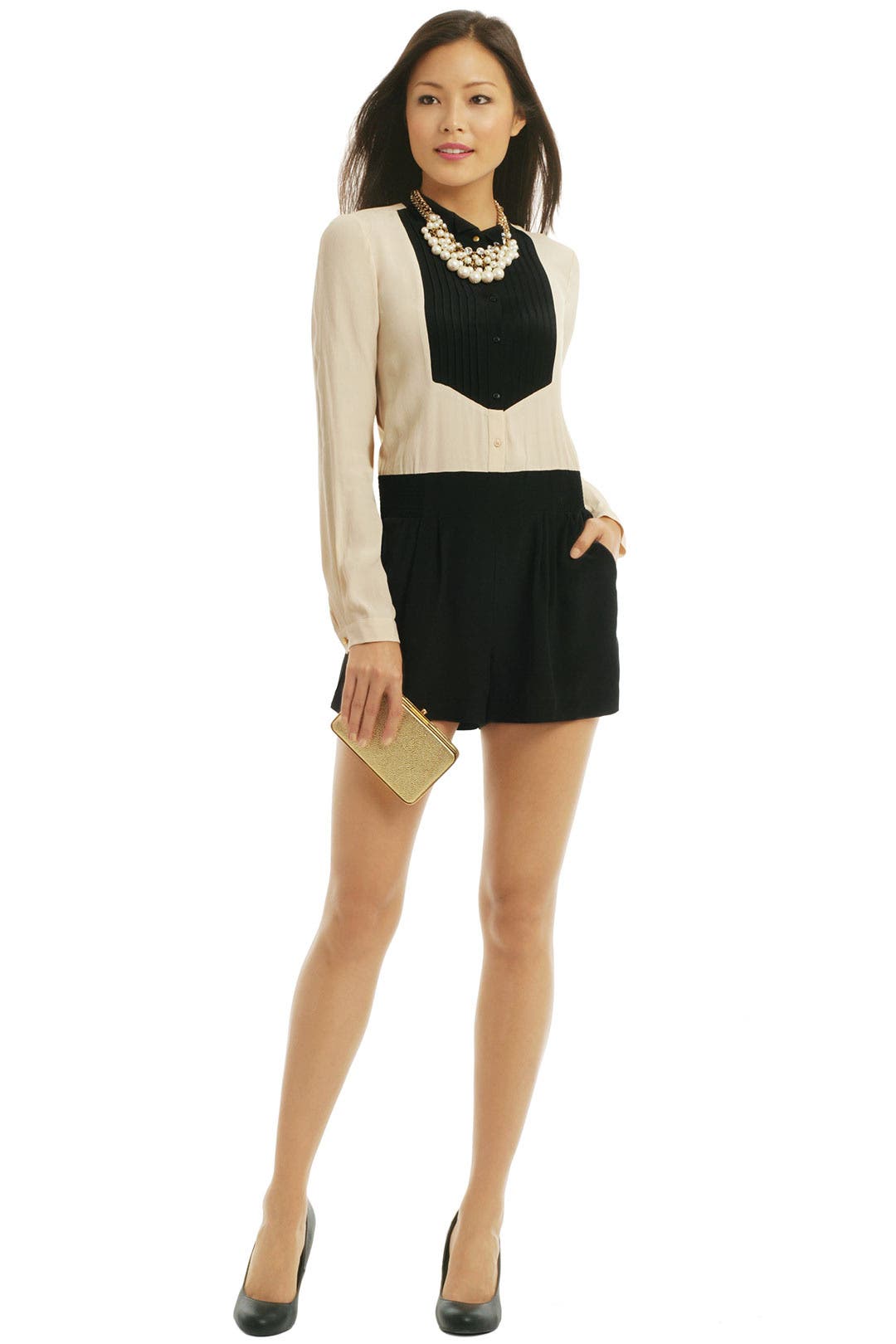 The first time you use RTR, you can get $25 off on your entire order over $50, so I decided to throw in this Show Stopper Necklace from Nineteen Pieces and Royal Mail Clutch from Lilly Pulitzer Handbags.

In total, I spent about $90 for a four-day rental. You pick a delivery date one to two days prior to your event, and you have to return it by 12pm on the fourth day. There is also an eight-day option, which is obviously more expensive.

*In the meantime, my friend, who I consulted earlier, was also planning on using RTR for the same wedding. She decided to rent dresses for two other events prior to this weekend’s wedding. The first event was the bride’s bachelorette weekend, and my friend was accidentally sent two long ball gowns meant for a woman in Texas. Since we went out of town for the bachelorette party, it was no use in having RTR send another one because she was leaving the next day. The second event was for a West Coast Reception for our friends’ wedding, and she had no problems. For this past weekend’s wedding, she received an e-mail saying they couldn’t send her the dress she picked out, and had to send her backup options. They sent two dresses – one, a gown Academy Award-ready, and the other, a LBD, which she ultimately ended up using (which I thought looked great!). She contacted RTR and told them because of their eff-up, she had to purchase last-minute undergarments, etc. and luckily, they gave her $100 credit. So, we know customer service is good. Separately, I have a friend who used RTR for a black tie wedding, and everything went swimmingly, while another got the dresses and decided they didn’t look good, so she ultimately didn’t end up wearing it.

Because I had heard mixed reviews ever since I reserved (and paid) for my dress and accessories, I was nervous that either it wouldn’t arrive on time or it just wouldn’t look as good as I had hoped.

The Thursday before Saturday’s wedding, I received an email from a RTR stylist saying the purse I had picked was unavailable. I had to provide five backup choices in order of preference and whichever was available would be sent to me at no additional cost. I was annoyed at first, but ultimately, I was just glad it wasn’t the dress, and I ended up picking a bag that I liked more than my original choice, this Black Faye Clutch from Times Arrow (and twice the price of the orig bag!).

Since I was a psycho and tracked the package every second, I grabbed the box when it arrive at my door around 6pm the night before the wedding. Inside, was a garment back with the two sizes of the romper, the necklace, handbag, and large UPS bag for you to put all the items once you return them. I must say, it felt very fancy, probs because I stick with the plebeian apparel. Anyways, I tried both on and liked how it looked, so no need to send back (also no time). My only complaint is that the shorts material was a tad thinner than I realized, but I made it work. Also, pockets! The necklace was shorter on me than I estimated, so I ended up not wearing it, which is fine, because I basically got it for free thanks to the $25 off and purse situation. The purse smelled brand new (is that weird), and was the perfect size to fit all my items.

I forgot to mention I paired this outfit with my own black wedges (easy to dance in all night) and earrings I forgot I had which were black and gold and art deco-y. Here’s a horrible picture of my friend (also in RTR) and I but it gives you a good look at the romp!

We took a pic later in the night, and I’m clearly sweaty from going hard on the dance floor, my friend looks like an angel, it’s fine. Also, I spilled guac (hi, wine) on the front black part of the romp, and while I tried to get it out, it was still a little visible. Luckily, you pay a minimal insurance fee when you rent to cover stupid mishaps like this, so I didn’t freak out about it.

The Return of The Runway

On Sunday, I packed both rompers, the purse and unused necklace in the provided UPS bag (the garment bag and hangers I could keep) and found a UPS drop box and said my last goodbye and watched it sail softly into the night (slash left it in a dark box).

All in all, I would recommend RTR. Based on my experience, it was easy to use and a slip-up on their part ended up being better than I expected. But based on my friends’ stories, it seems hit or miss. Here’s the bottom line – use RTR if you’re like me and don’t re-wear dresses to weddings and/or big events. Have a backup dress just in case, and if something goes wrong on RTR’s end, don’t be afraid to write customer service, because they will help you as best they can. Now I g2g find another dress for my third and final wedding this August.

3 thoughts on “Renting The Runway: A Wedding Story”