Okay, you know those movies and shows that everyone has seen, and when it comes up in conversation you just sort of nod and hope nobody asks you anything? I have a lot of those. The entire Godfather series, for example. I know. Anyway, we’re both out to tackle our pop culture blind spots and find out if the phenomenon we’ve missed out on are really all they’re cracked up to be.

Our first installment is a cinematic masterpiece that is the zenith of my generation’s teen entertainment. It stars Britney Spears and was written by a young Shonda Rhimes. And I’m pretty sure I’ve told like 5 people that I’ve seen it when it came up in conversation. That was a lie.

0:00 Not only have I refrained from seeing this movie since it came out in 2002, I have also been pushing it down our post queue for, like, two months. So I think a lot of our Pop Culture Blind Spots are movies, shows and albums that we’ve avoided because a still small voice said “another episode of Unbreakable Kimmy Schmidt, why don’t we?”

1:00 Taryn Manning, Zoe Saldana, Shonda Rhimes? This was an incubator for stars of the future.

1:20 … and the past. Kool Mo Dee, anyone? [Edit – next morning: I cannot remember where or how Kool Mo Dee appeared in this movie.]

I have already had to pause this to laugh at the Brit Spears voice over.

1:40 The wardrobe department did a very good job on the 90s flashback jacket for young Zoe Saldana (Kit, but it sounds like Britney is saying Kid). It’s easy to picture “90s kids clothes” today, but when it was only a couple years after the fact it was hard to remember what has changed. Like, if you told me to dress a child like it’s 2007, I’d put it in …. an Obama Hope logo tee shirt? No clue.

By the way, young Britney is played by Jamie Lynn Spears, before her life and career went in a totally different direction. You could almost say she was …. at a crossroads.

3:00 Oh thank God. Britney is singing again. Madonna’s Open Your Heart, which is really more suited to a televised mass wedding, to be honest.

3:51 BRIT IS THE VALEDICTORIAN. This is important.

4:10 PENNSATUCKY IS A PREGNANT TEEN. This is more important. I also am not sure how or when Taryn Manning became typecast as the redneck bad girl from the wrong side of the tracks, but she is so amazing at it. 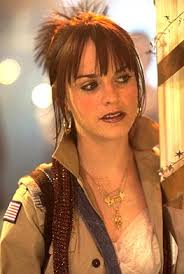 5:50 Why is Brit in a prom dress AFTER graduation? Do they do that in … is this Louisiana?

In my day (2 years after this movie was made) graduation night was the first chance you had to start never seeing most of those people ever again.

6:36 Britney Acting Range: Emotion #1: Pouty. She cries over missing out on high school stuff to become the valedictorian. When she says “I was like ‘is this it?'” you can almost see her straining to recall memorized dialogue.

7:23 They’re at some sort of fancy post-grad soiree. I forgot how shiny and pink 2002 was. Saldana is rocking the rows of twisted hair into a bun look. Sans butterfly clips, because it’s not 1999 here.

Reminiscent of the best Zoe Saldana role of all time, Eva in Center Stage.

10:30 Brit and her Nerdy Male Friend (Lucy and Henry, which sounds more like a preschool class in 2015 than a high school class in 2002) prepare to have sex for, presumably, the first time. There is a scarf strewn over a bedside lamp. Does anyone toss a scarf over a lamp before sex IRL? Anyone? Seems like a fire haz.

Henry, BTW, is Justin Long in his early career.

14:38 The Time Capsule was so boring. Oh my god, so boring. They put in emblems of their hopes and dreams, which is exactly as not-interesting as it sounds. Saldana wanted to get married, Brit wanted to find her mom, and Pennsatucky wanted to get out of dodge.

Britney Acting Range: Emotion #2: Opening a box. Kind of neutral, but wouldn’t most of us be if we were opening such a boring-ass time capsule?

17:10 Brit calls her mom “mother” which gives me hope that things will turn Baby Jane/ Psycho / SOMETHING.

Yo remember those slim-fit rugby shirts we used to wear? I assume there’s a name for them.

That one shirt we all had.

21:32 You know those people who,when you’re singing in the car, try to ~show off and sing really good? Britney Spears is that person.

Saldana has those sunglasses with a shape in rhinestone decals. Those are Paige Michalchuk sunglasses.

25:40 Ben was in jail. Ben is the guy they’re driving to LA with. Never take rides from a stranger, friends. That’s how you get serial killed.

27:00 Saldana is rocking some yellow-gold eyeshadow that I also sported a lot c. 2002. I thought it made my blue eyes “pop” but I looked like a baby that needed to get put under those jaundice lights.

Also they’re buying Funyuns. Do people actually like those?

29:00 Dan Aykroyd wants Brit to come home. I have avoided mentioning that Dan Aykroyd was her father till now because it pains me.

31:10 Those shirts with the thin neck scarf thing attached! I had roughly the same top as Saldana has on.

32:18 Pennsatucky and Saldana fight. If anything is redeeming in this movie, it’s Taryn Manning. She is amazing.

35:55 The girls do a Karaoke performance to make money. I Love Rock n Roll. I forgot about that Britney Spears cover. Spears packed a crimper in their luggage, apparently; thank God. She also has one of those shirts where the writing on it is split open in front of her cleavage, and her underwear is a solid inch above her low-rise jeans. Okay. So I have adjusted to the 90s fashion revival, but it’s really going to sting when the early 2000s come back.

38:00 Did you ever notice that Britney changes the end of every word that ends in an “ee” sound into an “ay” sound? ‘He was with may.’ I think that must have been part of the Mickey Mouse Club training protocol, because the late 90s boy bands did that, too. Or is it a very specific accent native to the Oakwood?

43:00 The girls have a slumber party at the house from Pretty Baby.

I waited to add images til my lunch break, and I can’t look up Pretty Baby at work because… have you seen Pretty Baby? But Google it and you’ll see that the set design is 100% the same.

Child!Saldana went to fat camp. Is fat camp real? Has anyone been? Will you write a guest post? I’m dying to know more.

You know what this movie is missing? The Shonda Rhimes cadence from Scandal. Where they all “talk like THIS, like.. they are reading a SLAAAM… poem.”

46:00 Wait, Pennsatucky is pregnant because she got date raped? This just got dark.

50:10 How many sing alongs do they have to do? I mean I know it’s a road trip movie… with Britney Spears in it… but I want to leave sing alongs to Man! I Feel Like A Woman on my high school tennis bus where they belong.

54:20 Car Owner Ben was arrested for helping his sister get away from his stepdad. This is the least fun road trip ever.

Shouldn’t a valedictorian be better at writing?

1:00:00 Kim Cattrall is here. Maybe that will help. She’s Brit’s mom, who lives in a McMansion. Lots of white, light oak, and giant floral arrangements. The decor preferences of a total bitch. She is dressed like the Crocodile Hunter, may he rest in peace.

1:06:40 Ben set Brit’s “poem” to music. That’s what I’ve been watching for over an hour? The origin story of Not A Girl, Not Yet A Woman? Britney Jean Spears’ fifth-best single? Now anybody who knows me knows that I love early 2000s-era Britney … hell, all the Britneys… but this is just too much.

1:09:20 They’re singing in the car again (If It Makes You Happy by Sheryl Crow, this time). Oh Christ Jesus. Holy Mary Mother of God. Sing With All The Saints In Glory. Why? If I wanted to listen to someone sing Sheryl Crow in the car I would go run errands with my mom.*

* If you like me even a little bit, you would love my mom.

1:12 I’m sure they explained this in between sing alongs, but how do they have the money to stay at all these hotels? Car Owner Ben? Now they’re in LA in a room with a beach view that looks like it would be the set of a Mary Kate And Ashley original movie. One of them would be the girly, sweet one and the other would be the sporty, funny one and their names would be Cleo and Baylee. Or Maddi and Lylah. Or Trixie and Summer. 1:15:40 Oh shit. Saldana’s BF is hooking up with some hussy AND he’s wearing one of those zip up bowling shirt things. AND he raped Pennsatucky. So obvi Pennsatucky owes nothing to anybody at this point, but wouldn’t you do a friend a solid and tell her that her BF/Fiance is a rapist? Or like slip it into a note since it’s an uncomfy convo. I’d say you could text it, but in 2002 that would have taken like 15 minutes and that’s IF your plan had texting.

1:18:20 Pennsatucky fell down the stairs getting away from Rapist Dylan and lost the baby. This road trip is the pits. Is anything good going to happen to her ever, or is this an early 2000s cautionary tale about going to parties in the first place or some-such?

I feel like this is an e.e. cummings poem where Milly (Brit) gets to befriend a fallen star whose rays five languid fingers were, and freaking Molly (Pennsatucky, Saldana) has to get chased by a terrible thing that runs sideways blowing bubbles.

1:24 So Pennsatucky sat out her miscarriage or whatever, and now they’re ready to go.

**** At this point, I went to take a picture of the screen but was accidentally on selfie mode. It’s against my better judgement to post this, but this is the ACTUAL UNALTERED FACE I WAS MAKING while watching this:

Those aren’t so much eyes as saucers brimming with confusion. ***

1:25 Dan Aykroyd comes to collect Brit. She says “don’t make me run, let me go.” Then she hands him her locket so that he can keep half of it and find her at an orphanage in 10 years, and she leaves to make out with the guy she met that week.

There’s a billboard for Spy Kids in the background, to give you an idea of what era we’re in.

And if there were still any doubt of what era we’re in, Brit sings at an American Idol-esque audition wearing a criss-cross crop top with enormous billowing sleeves. Pennsatucky and Saldana, fresh off a miscarriage and finding out her fiancé is a rapist, respectively, sing backup.

1:29 They make a new time capsule, but with no wishes for the future, because I guess Britney is the only character who has one at this point. For they are not girls, not yet women.