Welcome to another edition of Let’s All Decorate! This month, we’re taking a look back at a creepy, garish, zany time, a time when people decorate their homes in the loudest, wackiest fashion imaginable … oh, and also Halloween.

It’s true- the 80s were a rough era, design-wise. So you’d think that incorporating the second-tackiest holiday of the year (after Valentine’s Day) would make things even crazier. However, that discounts one major development of the 2000s: the Halloween-industrial complex.

When we were growing up, the slate of Halloween activities was fairly limited. There were pumpkin patches, which were seriously just places where pumpkins were grown and sold. I thought I remembered a witch at the one we frequented in my childhood, but no: it was just a cauldron. Haunted houses and haunted hayrides existed. You’d have your classroom party, and you’d trick or treat. That sounds like a full month of fun to me, but as someone who’s recently taken kids to a “pumpkin patch” that features pumpkin catapults, a zip line, and go-carts, I can vouch that times have changed.

The simpler Halloween celebrations extended to home decor. My mom was notably Halloween-obsessed, and we had Halloween candles throughout the house, molded to look like ghosts and Frankensteins. We had a windsock that wailed whenever there was a loud noise, which meant that every family argument in October was punctuated by plaintive moans of  “ooo-OOOO-ooo.” There were stretchy cobwebs, plastic graves, and probably some fuzzy spiders. We hung a string of pumpkin-shaped lights in the window.

And that’s it. That was extreme in the late 80s and early 90s. It was before every family had a bin of fall decor that came out after Labor Day. Trick-or-treaters weren’t greeted by animatronic witches, and googley, glowing eyes didn’t peak out from the attic windows of half the houses on the block.

Wall hangings were pretty popular at the time. My mom was a teacher, and those bulletin-board shapes from Teacher’s World were tacked up around our downstairs. I think some non-teacher-kid friends had them too, though. By the way, Teacher’s World smelled like cold coffee breath, exactly like you’d expect. 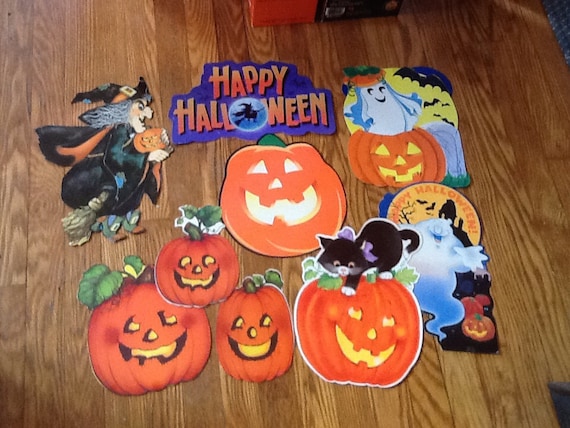 Just like this. In fact, I’m positive we had the cat one – I was a 6-year-old cat lady, and I loved it the best.

Then there were the candles. In one of my earliest Halloween memories, my brothers were bickering over candy. As things escalated, my mother erupted at them – and just as she started yelling, all of the candles in the room flared spectacularly.

We lost our best vampire candle that day.

The survivors are in my house now, nestled among succulents – which I imagine are the spookiest members of the plant kingdom, fly traps notwithstanding.

If you were the kind of family who had an elaborate Christmas village with glittery cotton snow and tiny Victorian people, then you probably had a Halloween village, too:

In a lot of houses, Halloween treat buckets were sort of decor unto themselves. As I said, the options were more limited. Before so many parents proudly declared that their kids NEVER have McDonald’s, the Happy Meal bucket was the gold standard:

In another instance of combining form and function, we gathered our leaves in plastic bags that looked like pumpkins. Now more and more municipalities have moved to collecting loose leaves – which makes sense, because they can decompose a lot better when they’re not in bags – and these are becoming a thing of the past:

I’m sure they existed long before the late 80s, but crafty moms were especially into tissue ghosts:

The tissue-paper honeycomb industry was red-hot in the 80s, and there were standup decorations for every holiday, Halloween included: The suction cup market was doing okay, too, as evidenced by these spider webs that were in my home and classrooms every October:

All of the coolest characters got into the Halloween spirit, and in a time when people weren’t as into integrating holiday decorations with their grown-up decor themes, these seemed like a legit thing to hang in your kitchen:

But clearest in my memory – nay, in the memory of everyone growing up in a pack of argumentative siblings – was the dancing, wailing ghost windsock, which I’m now realizing my parents probably hung in our living room to mock us during our October fights.