Watch this space: I’ll be live blogging the State of the Union here starting at 9:00 EST. What can I say, it’s the POTUS’s final SOTU and I’m feeling a bit nostalgic. So if you haven’t pledged your  readership to any of the many other SOTU live blogs, come back here tonight – I promise ours will be a lot more fun and 100% less cynical than you’ll find on any political sites.

During the address, be sure to refresh the page periodically to get our latest updates.

9:00 We’ve been promised a “non-traditional” speech. What I’d like that to mean: a song, an elementary school-style skit with Joe Biden as “Narrator”, an interpretive dance, spoken word where the President EMPHASIZES words and employs… pauses… rhetorically.

9:02 According to the commentators, the State of the Union address has already been posted online, if you like reading speeches before you hear them, I guess. Meanwhile over here:

9:07 Everyone is clapping for what seems like an absurdly long time when President Obama enters. I hope this means that the final State of the Union is like the end of senior year of high school, when random people start becoming friendly with each other because they have nothing to gain by being enemies anymore?

9:10 Michelle is in a mustard-y orange & yellow, not even caring that it’s cold because her arms look good and she KNOWS.

9:11 The president promises that the address will be short, which feels like that thing the priest says on Easter morning and it’s always a lie.

9:12 Okay, but Democrats and Republicans do know that the blue/red color code is just for imaginary maps that CNN uses on election night, right? You can all wear all the colors.

9:14 If I were bored at the State of the Union, I’d start counting Tiny American Flag Pins.

9:15 Bernie Sanders looks like he needs a tall glass of orange juice, a nap, and a few hours of sunlight. Campaign life has got to be HARD.

9:23 Education is important …. but I’m not so into the reference to No Child Left Behind. Some of those NCLB mandates did much more harm than good. But yes for universal Pre-K!

9:25 That’s why Social Security and Medicare are more important than ever; we shouldn’t weaken them, we should strengthen them. – Obama discusses filling the gaps in employer-based care so that people are still covered (because no, COBRA didn’t really do that).

9:29 Now Obama has to do that dance where he pledges to tackle imbalances that favor large corporations, while affirming that he REALLY LIKES THE PRIVATE SECTOR.

9:31 Okay, we’re getting into it now: Food Stamp recipients didn’t cause the financial crisis; recklessness on Wall Street did. Immigrants aren’t the reason wages haven’t gone up enough; those decisions are made in the boardrooms that too often put quarterly earnings over long-term returns. It’s sure not the average family watching tonight that avoids paying taxes through offshore accounts.

9:32 Talking about American innovation and creativity, the POTUS sort of drags up the Space Race like we’re all secretly still a bit salty about Sputnik. 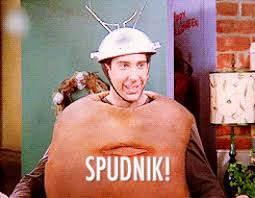 9:35 Obama declares that America will be the nation to cure cancer – and honestly. We should be. We’re one of the most populous and wealthiest countries on Earth with a solid (though flawed) educational system. I somehow doubt that a lack of brainpower isn’t what has stopped it from happening yet. Let’s get that going.

9:37 From there, Obama goes to climate change. While most reasonable minds agree that clean energy at the LEAST can’t hurt, roughly 25% of the audience starts shifting uncomfortably in their seats and making frowny faces.

9:39 The President says we should be “putting tens of thousands of Americans to work” building 21st century transportation. Sounds a lot like a modern-day New Deal type situation. All of the public sector WPA jobs did great things to stabilize incomes during the Depression, and I’ve been wondering why we haven’t been copying that during the Recession.

9: 42 I’m so interested in how some politicians/outlets use the ISIL acronym and others ISIS (with SISI a distant third).

9:45 There is some minor grumbling when Obama says that ISIL “do not threaten our national existence. That’s the story ISIL wants to tell; that’s the kind of propaganda they use to recruit.” But he’s absolutely correct: by definition, terrorists use fear to operate – which includes instigating the U.S. to take offensive action, thereby further stirring anti-Western sentiments in unstable states.

9:49 On a totally different note, sometimes Paul Ryan’s hairline looks like a heart.

9:54 If you’re on Twitter right now, do yourself a favor and start following the #Ham4SOTU tag.

10:03 Obama discusses the necessity for voting reform (yes!), or for those rapping along, corruption’s such an old song that we can sing in harmony, and nowhere is it stronger than in Albany.

10:07 But I can promise that a year from now, when I no longer hold this office, I’ll be right there with you as a citizen — inspired by those voices of fairness and vision, of grit and good humor and kindness that have helped America travel so far.

10:10 Obama closes: “That’s the America I know. That’s the country we love. Clear-eyed. Big-hearted. Optimistic that unarmed truth and unconditional love will have the final word. That’s what makes me so hopeful about our future. Because of you. I believe in you. That’s why I stand here confident that the State of our Union is strong.”

But of course, I fill in “Full Hearts, Can’t Lose” after “clear-eyed.” Because Obama is like a combination of Coach and Mrs. Coach, and to mix pop culture references, now he’ll have to teach us how to say goodbye.

2 thoughts on “Live Blog: State of the Union”