::SPOILER WARNING: If you have not watched the pilot of This Is Us yet, and you plan to do so, stop reading now and go to your nearest Hulu account or On Demand platform. We’ll still be here when you get back. ::

Did anyone else watch the This Is Us pilot with no idea of the twist — or that there even would be a twist in the first place? It’s a show about different people who were born on the same day and are turning 36 years old during the pilot. The conceit: the people are twins Kevin and Kate, their brother Randall who was adopted after Kevin and Kate’s triplet brother was stillborn, and the siblings’ father Jack. You watch the whole pilot thinking the characters are all contemporaries until the camera pulls back and you realized that Jack and Rebecca’s story is taking place in 1979, and he is the father of Kevin, Kate and Randall. You wouldn’t think that it would work, but it does.

The reason? Hipsters. Jack and Rebecca’s story takes place in their new home and in a hospital maternity ward. Anyone who’s been to visit a new baby recently knows that hospital decor is frozen sometime around 1972. As for the home, if you follow decorating websites and magazines, you will recognize that the hottest trend for hip 20- and 30-something professionals is to decorate like they’re in Pittsburgh in 1979. There’s stark white mixed with dark wood, orangey and earthy accents, and a whole lot of DIY-looking crafts. Can you blame me for not realizing that Jack and Rebecca’s story took place 37 years ago?

For a little context, my parents got married in 1975 and their first child was born in 1978. Like most couples, they acquired a lot of their decor in the first years of their marriage. I’m child number 4, born in 1986. The burnt orange carpeting, dark plaid sofa and geese in flight that my mom was carting off to Goodwill in the ’90s were all the same features you’d see in Jack and Rebecca’s home. They’re also the same features you’d see on Apartment Therapy and Dwell today – so maybe my parents should have suffered through 20 years of being unfashionable and waited for it to all come back around again.

Usually we time travel during our Let’s All Decorate posts, exploring trends like geese in bonnets or sponge-painting. This time we’re doing something a little different: it’s 2016 and we’re decorating a hipster haven … in the spirit of the late ’70s, the most hipster era of them all.

Then: The hippie DIY craze was going strong and people were looking for a fresh way, other than paintings and photographs, to add some interest and texture to their walls.

Now: Literally just replace hippie with hipster. There are ‘wall hangings’ that are basically macrame everywhere from West Elm to Target to Etsy. Then: The psychadelic late ’60s led into a more peace-and-love floral look in the ’70s, and the result was giant, bold patterns on walls. Then: The first big household project I remember, c. 1990, was my mom ripping out the orange shag wall-to-wall carpeting that basically sold my childhood home for my parents when they were 20-something househunters in 1979 (to reveal gleaming 1920s hardwoods, naturally).

Then: If you’ve bought or renovated a 1960s – early 1980s house, there’s an excellent chance you’ve had to contend with the dull, dark-finish wood that ensconced cabinets during that time.

Now: After a late 80s through early 2000s flirtation with light oak and pine, darker woods are back. Unlike the ’70s, a glossier finish is in style.

Then: We may associate the hippies with the late ’60s in popular culture, but a flip through a family photo album will tell you that the love for mother earth extended into the decorating styles of the ’70s and early ’80s. Natural stone, water features and big houseplants were especially groovy (NB: I’m told that hardly anyone actually said ‘groovy.’

Now: Look at any bespoke house in Dwell or Houzz and you’ll see that letting the outside in is a modern priority, too. Skylights and local stone are all things homeowners are wishing they hadn’t ripped out in the 90s. Then: The DIY craze hit the blanket industry hard and granny squares were too cool.

Now: They better be cool again because this is my living room (see sofa). 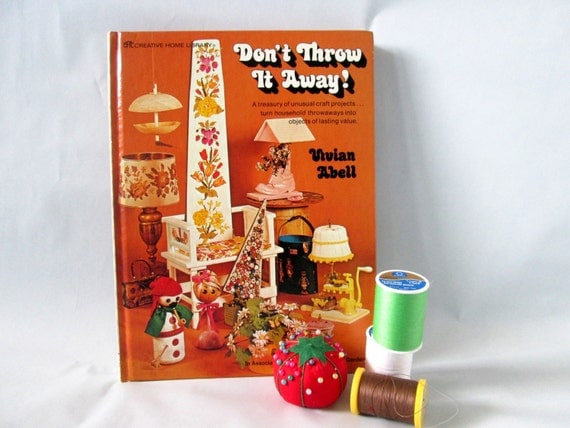 Then: Yep, this started as a ’70s fad. The economy wasn’t doing so hot, and homeowners were getting creative. Popular projects included turning things into lamps, incorporating old whiskey barrels and wagon wheels into outdoor decorating, and creating planters out of EVERYTHING.

Now: Maybe it’s the economy, maybe it’s just homeowners following the adages to “use it up, wear it out, make it do or do without” and “reduce, reuse, recycle” – either way, there are thousands of tutorials out there to create a garden bench from an old crib, a table from a suitcase or a bedside table from a TV case. Again, I HOPE this is cool, because this is my bed with a barn door from the 1800s as a headboard: Then: I think the 1970s are unfairly maligned as a decade with no taste. Sure, things got garish for a while, but after the sleek midcentury modernism and colonial revivals of the past decades, it’s nice that decorators were playing and having fun. Nowhere was that more evident in the uses of color. Lots of it. On things like appliances, even.

Now: We circled back to beige and taupe for a while, but unless you’re staging your house to sell it’s actually cool to have lots of bright color again. (Or… I hope so, because you saw those pictures of my house.)