Over the weekend, millions of people from across the U.S. and around the world took to the streets to stand up for women’s rights, human rights, and resistance against a questionable administration. From Washington D.C. to our hometown of Rochester to Los Angeles to Sydney to Nairobi to London and Antarctica, there was an outpouring of dedication, passion and female empowerment. But what was impressive (besides the fact not ONE arrest was made ANYWHERE) were the signs that were being held up my women, men and children all over. The ranged from simple statements of facts to images that made you cry to straight up hilarious ones. Here are some of our favorites from the history-making #WomensMarch.

LOOK AT THESE GOOD BOYS pic.twitter.com/kGArlLU0XJ

“Good boys against misogyny.” “Even I understand no means no”

A Point Loma woman dressed up her dog for the Women's March @10News pic.twitter.com/ee0ZhwkQfS 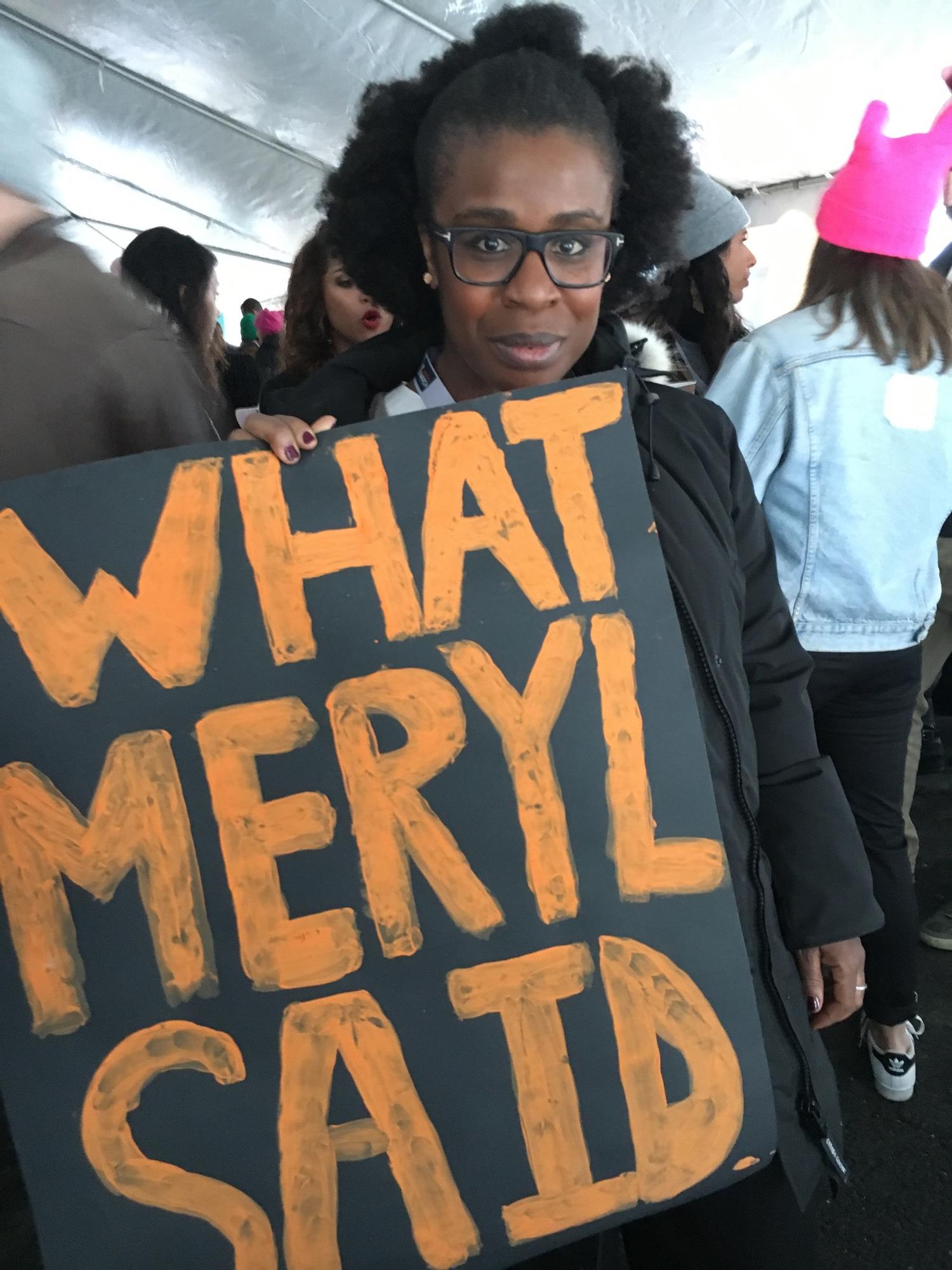 Love it! – "You're so vain, you probably think this march is about you." #WomensMarch #seanspicer #Inauguration pic.twitter.com/e70TcY4r4d

Couldn’t be more accurate: “You’re so vain, you probably think this march is about you.” and now an iconic combo photo. carrie fisher AND hamilton.

IT IS EVERYTHING #WomensMarch pic.twitter.com/s68mrMzuxu

Coffee Talk with Linda Richman: “Donald Trump’s blind trust is neither blind nor a trust. Discuss.”

"If progressives are snowflakes then winter is coming" #WomensMarch pic.twitter.com/yNxyLZnUDJ

Do the trolls even WATCH Game of Thrones? “If progressives are snowflakes then winter is coming.”

not a competition but this one wins pic.twitter.com/LJKvdCsMot

Because the scariest thing is ANTM-era Tyra being disappointed in you: ” None of us were rooting for you! How dare you!”

We knew Bey would be represented, but so was Jay: “I’ve got 99 problems and white heteronormative patriarchy is all of them.”

An awesome art reference: “Ceci n’est pas un president” in the style of the iconic Magritte pipe painting, The Treachery of Images.

Beloved feminist Ian McKellen needed no words – his poster was a picture of Spock face-palming.

We take orders from Beyonce, not that orange guy: “Okay ladies now let’s get in formation.”

a fun one for the hollywood type.

Time to reboot the DA: “Dumbledore didn’t die for this.” Favorite reference to The Office from the marches: “I feel God in this Chili’s tonight”

"I will not normalize 3 Doors Down" was a crowd favorite at the @marchonaustin today. pic.twitter.com/QvChhb9h3P

Because there’s only so much we can take: “I will not normalize 3 Doors Down.”

These women never met till today and practiced this song online. Show them some love. #Icantkeepquiet #WomensMarch #WomensMarchOnWashington pic.twitter.com/rPA4dDTIYz

Not a sign, but they worked so hard and aren’t women just the VERY BEST?

“why are you so obsessed with me?” regina george and mean girls quotes are always applicable. stop trying to make trump happen.

“Don’t try to grab my pussy it’s made of steel.” when supergirl takes the streets

"Trump Skis in Jeans" – My dad protesting at the #WomensMarchdenver pic.twitter.com/2rOQpBYs85

Other assaults on good taste spotted on signs: Trump doesn’t even read, Trump eats ketchup on steak, and Trump listens to Nickelback.

“Free Melania” (No seriously Melania, do you want us to come get you? We can come up with a signal.)

Things We Definitely Believe About Trump and His Administration

“I’ve seen smarter cabinets at Ikea.” I’d also like to note that I’ve spent longer putting together Ikea cabinets than Trump has assembling his executive cabinet.

Find me a better #WomensMarch sign than this one. I challenge you. (via @BenMcCool) pic.twitter.com/vIjp0B5oHd

“Donald J.Trump will lie about this.” Done and done.

Seen in #womensmarch #losangeles. We definitely are all @MichelleObama at the #Inauguration pic.twitter.com/n48kmRiz1e

i am forever michelle.

“Thank you Obama, we’ve got it from here.”

LGBTQuestioning How We Got Into This Mess

"I am a divine tender brilliant beautiful queer goddess" pic.twitter.com/7W1r9fulCA

the mirror is such an a+ touch

Yes, that Tambourine Man is me. Flattered by the enthusiasm. If you care about the POWER of the QUEER VOICE, please donate to @nycgaychorus pic.twitter.com/FmWtMmNmww

“Never underestimate the power of a faggot with a tambourine.” I not only saw tambourines, I saw dudes with bongos. 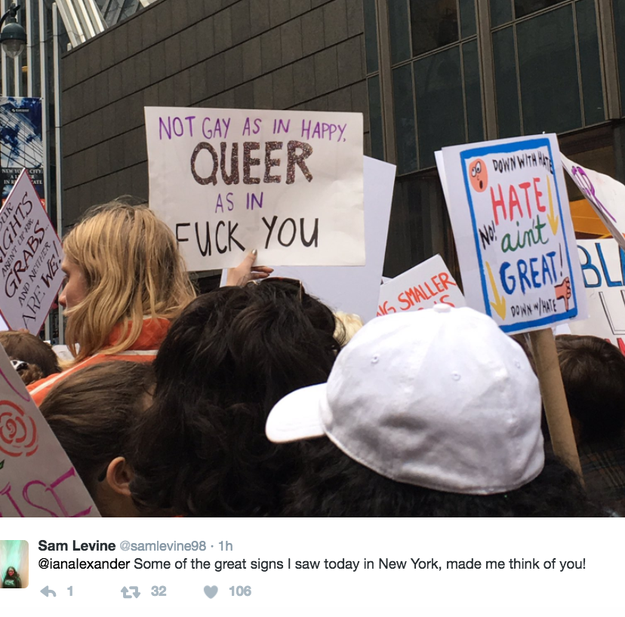 “Not gay as in happy. Queer as in fuck you.”

“Shed walls, don’t build them” on a picture of a cartoon uterus. 20 bucks says there are men in DT’s cabinet and sitting as Republicans in Congress who don’t get this one.

“Keep Uncle Sam out of my clam”

Signs Of The Future

This is Erin, 11, on the 6 train headed to the march. pic.twitter.com/Iy5W2trtGK

“Trump is a Racist, Sexist Dicktator. Mom says my spelling is fine.”

" My mama don't like trump and she likes everyone " – #WomensMarch #Beliebers #BestFanArmy #iHeartAwards pic.twitter.com/ti02TfpsYI

My mama don’t like trump and she likes everyone. bonus points for the beliebers out there.

Young boys and their little sister: “My sister believes she can be president. #ThanksHillary” anyone else immediately weep after seeing this?

“japanese americans against Muslim registry” AND ALSO WEEP AT THIS?!

Adorable toddler: “I (heart) naps but I stay woke.”

Trump, Don’t make fun of people who are different. Be Helpful, Be Kind, Like me!

Sign from the #MarchOnWashington DC #WomensMarch … really love this one. #TheResistance pic.twitter.com/ZmmS6mLD6n

A child I wish were in the cabinet: “What do we want? Evidence-based science. When do we want it? After peer review”

Boys will be good humans.

“You’re fired! 2020” – Love how you can tell this little lady KNOWS she nailed it with this sign.

“I’m marching for our future” She’s even got her superhero cape on. And tutu for good measure.

“Tiny Hands – Yuuuuuge mistake. Sad!” – Some of the coolest middle schoolers I can imagine.

the british womens march signs are definitely my favourite pic.twitter.com/ToXGmadxbB

Beautiful British understatements: “ugh,” “This is very bad,” “I’m really quite cross,” “I am very upset.”

From the London #WomensMarch #TheResistance pic.twitter.com/N4Z5MMoFMP

A nasty woman in front of the Eiffel Tower: a Trump “Nope” in the style of the Obama Hope posters.

I'LL SEE YOU NICE WHITE LADIES AT THE NEXT #BLACKLIVESMATTER MARCH RIGHT ? pic.twitter.com/voTQuR5D5A

“I’ll see you nice white ladies at the next #BlackLivesMatter march right?”

Basically me whenever That Guy is pictured near any lady, even those I don’t necessarily know or like: “stay the fuck away from my friends you rapist nazi fuck”

First they came for the Muslims and we said "NOT THIS TIME MOTHERF*CKERS." #sandiegowomensmarch pic.twitter.com/mB8f0FTxdS

Because we can write the future, even if we couldn’t write the past: “First they came for the Muslims and we said ‘not this time motherfuckers’ ”

On Trump with a slightly amended hairdo: “Not Today Satan.”

When you’d LOVE to be home with Netflix: “So bad even introverts are here.”

Our exact thought process w/r/t sign-making: “UGH where do I even start.”

This pussy has wings.

Like looking in a mirror. #hillaryclinton #washingtondc #womensmarch #feminism #pussygrabsback

“Now you have pissed off grandma” to be fair, he’s pissed off a lot of grandmas.

Just a casual Ruth Bader Ginsberg head on top of a pole.