Frances McDormand was thisclose to Cady Herron-ing her Oscars speech, Armie Hammer shot hot dogs at an unsuspecting movie theater-going audience, Kobe Bryant became an Oscar winner, and the La La Land/Moonlight jokes flowed like the tears I had for almost every performance of the nominated Original Songs. But as always, the fashion made headlines too and we’re just another blog adding to the list. Did your faves make the cut?

Lupita has been one of our favorites since she came onto the scene looking and acting like a modern-day Audrey Hepburn several awards seasons ago. This beaded sash is gorgeous (I love a good sash, but on most people they veer on either the beauty pageant, Grand Duchess, or Michael Jackson side…) and check out the gold sewn into her hair!

I’m always a sucker for anything flapper-inspired and this look is all glam and glitter. It’s no mistake that so many of our favorites are gold, silver and champagne-colored. It’s a big night and I love when stars treat it as such. The diamond and aquamarine necklace is so classic that I was surprised it wasn’t vintage.

It’s cherry blossoms! Mira is making up for lost red carpet time in a stunning way here. Not to start another controversy about dress color – I think we can all agree we shouldn’t go down that road again – but I read this described as blue and I really do not see it. Surely they meant blush?

Margot’s gown is one of the simplest on our list, but it’s deceptive. Look at the criss-cross layers on the skirt and the wispy feathery detail along the top — it’s a real god is in the details situation.

Gina always looks stunning on the red carpet because she is always entirely polished without being overdone. Sleek hair, simple but evening-appropriate makeup, and this silvery cloud of a gown all come together to make her look full-Hollywood glam.

Honorable Mention: Rita Moreno in Her Old Dress From 1962 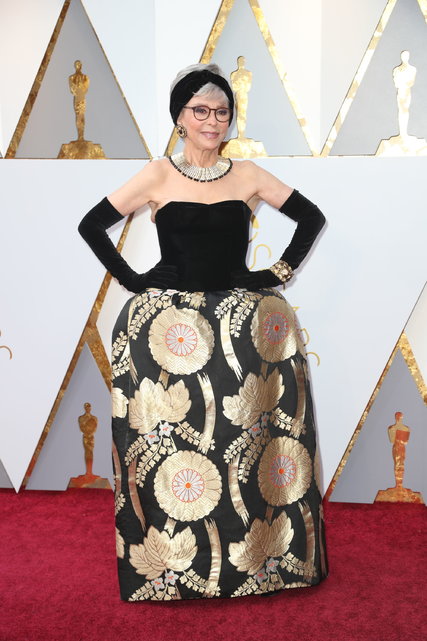 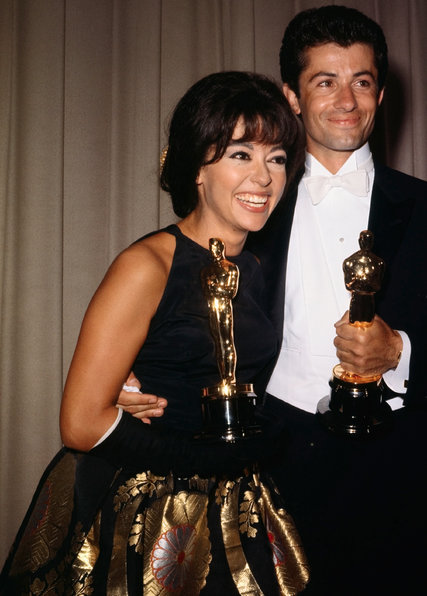 Allison Janney – sorry – OSCAR WINNER Allison Janney picked the perfect gown to take home the golden trophy. The sleeves, the hair slicked back, the deep V paired with the simple diamond necklace, gives just the right kind of drama that an Oscar winner should display. The only thing we’re disappointed in is that she didn’t do The Jackal at the end of her speech.

This is how a a king should dress.

I always love when an actress goes for straight up Hollywood glamour at the Oscars, and Allison did just that. The beading, the sheer illusion top and the wavy hair all come together to help give Allison the perfect movie star look.

The Disaster Artist actress (did you know she’s Lea Thompson’s daughter??) wasn’t nominated for anything but still showed up to the party looking fabulous, and I’m into it. In a sea of white, this off-white gown stands out from the crowd.

Emily’s dress was old Hollywood and Met Gala combined. I particularly love the velour/velvet crimson belt that added a bit more depth to the whole look. I will never stop shipping them.

If you’re an Arrested Development fan, chances are you’ve already seen the new season in its entirety. And although creator Mitch Hurwitz warned AD fans to try to calm their excitement and spread out the viewings, it’ll be difficult to not watch all 15 episodes after waiting for seven years. Not to mention, this reincarnation of the series will bring the likes of Kristen Wiig, Seth Rogen, John Krasinski, Conan O’Brien, Ben Schwartz, John Slattery, and more to the Bluth family. So to help you heed Mitch Hurwitz’s request, take a break from your binge watching and get a refresher on some of the stars who you may have forgotten (or never even knew) appeared on this iconic show.

Well, this is kind of a no-brainer, since Queen Amy appeared in 5 eps as Gob’s wife (ugh, RIP Will/Amy), who Gob kept forgetting he was even married to. So much so she didn’t even have a name.

Playing one of my personal favorite AD characters, Julia played Maggie Lizer, a ‘blind’ attorney who was also Michael’s on and off girlfriend. This scene where Tobias sneaks into her house trying to be stealth but the fact she is fully aware he is there is one of the greatest things I’ve ever seen.

The Scrubs/Kickstarter star played Phillip Litt, a man who showed that Tobias was not alone in his Never Nude world.

The Oscar winner played Rita Leeds who was briefly engaged to Michael, and although she may not have been the sharpest tool in the shed, she was wealthy – as the heiress to Wee Britain.

Long before she terrorized kids at McKinley High School, Jane played Cyndi Lightballoon who was an undercover agent investigating Pop Pop. Except she eventually falls in love with him. It happens to the best of us.

In a career-defining role, the Winklevoss twin(s) played ‘student number 2’ in one episode – he calls George Michael ‘star dork’.

Kenneth the Page was still tending to people’s needs (and encountering Devon Banks) before helping Tracy at TGS – he played a waiter at the local country club in two episodes.

Ok, but Ed Begley Jr. LITERALLY is in everything. He shows up in almsot every movie or TV show I watch (Office finale, much?), and it’s even a running joke with my friend Suzanne because she sees him everywhere in LA. So naturally, his off Stan Sitwell character has to be on this list.

Speaking of The Office, rit-it-it-itdoo, the Nard Dog played realtor James in “The One Where Michael Leaves” episode, whom Lindsay thought was hitting on her. And maybe a minor spoiler alert? He’ll be back in the new season too.

Before Phyllis was a saleswoman at Dunder-Mifflin, she was a board member at the Bluth Company. Incidentally, just weeks after this episode (The Immaculate Election) aired, she made her debut on The Office.

Dink and flicka. Tobias has an audition at Tantamount Studios, and Craig Robinson is there to guard the gate. Except he probs should’ve been keeping an eye on Maeby instead.