The 2015 Awards Season finally came to an end last night as Neil Patrick Harris sang and danced his way into our homes, Birdman “flew high” with a lot of awards and all the punny headlines, and Adele Dazeem finally got back at Glom Gazingo, who managed to be even creepier than ever before.

So as we take one last look at last night’s Oscars (which you can relive with our live blog here), we break down our favorite and not-so-favorite looks from Hollywood’s big night. Did your faves make the cut? Or were they snubbed like The Lego Movie and everything is actually not awesome?

Usually a black dress wouldn’t make my list, but we were seeing so much white and color last night that it was refreshing. This was like a modern take on the 1930s vamp look, and the red lip and vintage ’30s tassel necklace added just enough color. Sometimes loose hair can look too undone at the Oscars, but at this length it’s perfect.

I’m in the fashion minority, but I don’t really like contour dresses. They always make me think of wearing a dress that has an outline of where a skinnier person could fit. But that’s when they do a full-body effect. The satin inserts draw her waist in, but it’s not obvious. I keep zooming in to look at the texture. They always say it’s hard to wear red on the red carpet, but it was a gamble worth taking here.

Only Lupita is so lovely and precious that she would wear a dress made entirely of pearls. You know, because she’s a pearl of a girl. Hi. I’m your grandpa. The light hit this beautifully. One article called this a Josephine Baker look and it totally is – 1920s but not a full flapper getup or anything. Also I cannot imagine how uncomfortable it must be to wear a dress made of 6,000 pearls.

In some lights this was white, in others ice blue. Anyone want to weigh in? I’m on the “ever so slightly blue” side myself, but not in this photo. In any event, on a night when beading and tulle seemed to be the order of the day (not complaining!) this simple look was a nice change of pace. Witherspoon was promoting the #AskHerMore campaign last night, by the way, so for once we actually got to hear more questions about her portrayal of the awesome Cheryl Strayed and fewer questions about her ensemble.

The rest of my true Top 5 is covered in Traci’s list below, so why not cover someone who ALMOST made the cut? J.Lo always looks like some sort of modern princess, but the asymmetrical beading/accent work keeps her from looking too Cinderella/Belle/Whatever. If I had a magic wand I’d lose about an inch of fabric from the bottom – the pooling is nice but it was hard for her to walk in. And I’d put that inch of fabric on the inside of the neckline – the plunge is fantastic but it’s just thatmuch too bare on the inside.

Oh goddess that is Anna Kendrick. This is one of my favorite looks from her – ever. The coral color is a perfect compliment to her paler complexion and the halter/keyhole combo is simple yet elegant and on point for the Oscars. She really is a princess.

Just call this Jen’s ‘Suck it for not nominating me’ gown. Despite the fact she got left out of the running this year, she still managed to look better than a lot of the other nominees in this stunning gold beaded gown. It’s a simple strapless dress, but the swooping lines and shiny touches are just enough to make you admire in awe.

OSCAR NOMINEE Gemma Skrones (I honestly can’t stop saying her name like that ever since Andrew Garfield called her that) is looking divine in this lime green *backless* number from Elie Saab. Paired with her gorge hair, it’s a great modern day take on old school Hollywood glamour, and I’m into it.

The men’s trend this year was Not Black Tuxes, there were a handful of white suits (see Grand Budapest Hotel contingent) and Jared Leto Lavender, but nothing compared to David Oyelowo. Like Jennifer Aniston before him, David opted to wear his ‘suck it’ suit, and went with a bold dark red (crimson?) suit by Dolce & Gabbana that made him stand out from the crowd, despite the fact he didn’t get a nomination. But listen, I think Selma and everyone involved won the moment John Legend and Common stepped on the stage. So win/win.

This champagne dress is beautifully made on its own, but add that to the fact that Zoe produced two – TWO – humans a mere three months ago and she managed to go on the red carpet and look like this. Hot freaking mama.

Honorable Mentions: Neil Patrick Harris and David Burtka in hot couple suits and Faith Hill in J. Mendel (I still can’t get over how well accessorized she is with that necklace)

I really loved this until she turned around and I saw the butt-panel, too.

Apparently Gwyneth is 42, which is not at all old, but I always think of her as a 20-something because she imprinted in my head during the Shakespeare In Love era. This dress is the same color as her iconic pink Oscar gown, and I almost really like it except that the shoulder reminds me of cabbage. Otherwise flawless.

First of all, I know that it’s Lady Gaga so we aren’t really judging her on the same criteria as everyone else. Still, I saw this and my heart sank a little. You haven’t been hearing that much about her, and then she shows up in dishwashing gloves. I was never a superfan but I always thought she seemed like such a nice gal and I was hoping for a career reboot. Then she KILLED the Sound Of Music tribute and this look faded to the recesses of my memory.

She’s pregnant, so it doesn’t even seem fair to place her on this list. If I’m ever pregnant I’m probably going to be dressed in sweatpants and frustration from the moment my clothes stop fitting. But the scalloped bodice and floaty florals look like a maternity flower girl dress. Knightley looked gorge at the Vanity Fair party, so she ended the evening on a high note. And dress aside, holy cow, she really IS glowing. 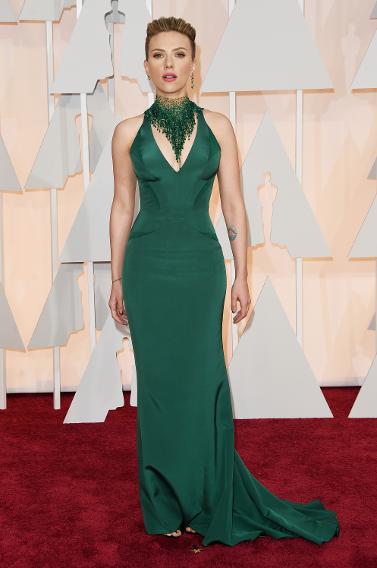 I have relatives who STILL buy me things in green because when I was a kid it was my favorite color. It’s weird to have a favorite color as an adult, but I still love it. And this dress is the perfect shade for ScarJo, and it’s really well-tailored, too. But then that necklace looks like it was poached from a Muppet’s neck-ruff or something. So close/so far.

I’d like to preface this by saying I adore Julianne Moore and think she deserves all the accolades and praise she’s received over the years, especially with her first Oscar last night. But. Woof. It’s not an ‘Oscar-winning dress’ and it’s really not a dress that anyone should wear. ever. The beading is impressive, however the design itself is no bueno. She should’ve gone with a green dress like from the SAGs earlier this year.

Felicity seems like a delightful, British gal, but it’s almost as if she took one of those fashion design stencil plates and mix and matched a top and bottom that don’t actually go together. A for effort though, I guess.

I never get how models can just not hit the mark on the red carpet. It’s their actually job to sell clothes, but when they wear a dress like this, it’s hard to sell. And the thing is that she’s a beautiful girl, but with that weird large necklace and slicked back hair, none of it is working for her. 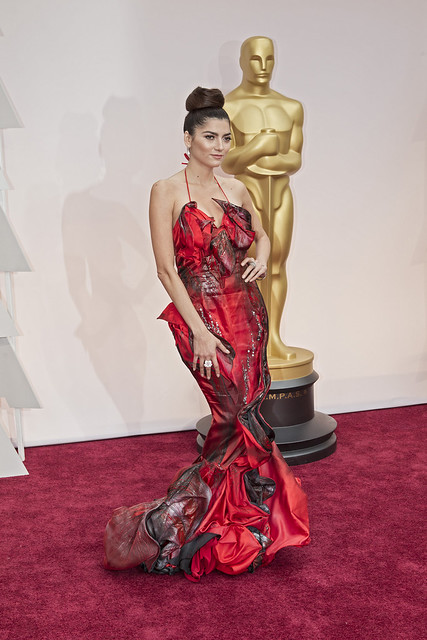 I don’t really know who this is. I don’t know who designed her dress. But this is like Cinna’s first draft of Katniss’ Girl on Fire gown but decided it was too disgusting for the Games.

(Dis)Honorable Mention: John Travolta in this chain necklace. What in the world.