Welcome to another edition of Let’s All Decorate! It’s 1997. Maybe we’ve discarded our bonnet-wearing geese, and maybe the last of our weird pastel southwestern stuff has been shipped to Goodwill. If we’re really cool, we might even own a giant tv armoire. But if we are creative, artistic, and like to amp up our home decor using household cleaning products, we have some serious sponge painting going on. It’s like when Elaine Benes wondered who was sponge-worthy, we as a people said “NO. The question is what is sponge-worthy?” And then we collectively answered: Everything. Leave no wall un-sponged!

If you’re too young to remember, or just preferred your walls to be one continuous, non-spongy color, let me explain sponge painting. First you’d paint your wall a base color. In modern times, that is where we leave it. But it was 1997, you were blasting Hanson or Jewel on the radio, wearing one of those shirts with one big stripe across the chest, your curled-under-with-a-round-brush bangs hadn’t drooped yet – you were feeling good and you wanted to keep going. Did you have a sponge and a second paint color? Well then you were ready to create a home decorating trainwreck! You’d get a bigass sponge – not a flat kitchen sponge but a big old textured mofo. You’d dab it into paint color number two, then you’d just freaking blot it all over your walls. I mean, you’d re-up the paint when it ran out, which was often because it’s a SPONGE whose job is to absorb stuff. Like, the sponge tried to prevent this decorating atrocity from even happening, but we just kept at it.

You could have more or less overlap depending on how much of the “base” you wanted to show.

You could leave the sponge ghosts loud and proud instead of overlapping, like these brown kitchen people. Yeah, that was not how you were supposed to do it.

Also, it helped if your base and sponge colors were variations of the same color instead of… this:

Sometimes sponge painting made it look like your house was overtaken by a mud-tornado or a sewage explosion: Sometimes it looked like you chewed up paint and then regurgitated it atop other paint, which doesn’t really make sense, but then again neither does painting your walls with a cleaning implement: 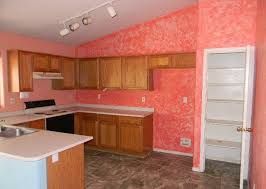 But be careful not to press too much paint into your corners! Or actually who cares, it’s all terrible:

But hey, if you sponge painted your counters, maybe they’d look like marble!

NO, oh my God just kidding, it would look like your cat walked through tar then trip-trapped across your sink.

You could even sponge up your dresser even though looking at it kind of triggers my vertigo.

You could combine your sponging with solid paint and wallpaper, too. It was a way to “mark your territory” for all future homeowners, because this mixed-media masterpiece can’t be easy to remove.

Okay, but why? Look, I’m not an outsider. I was all about the “texture” and “interest” that sponge painting provided. I sponge painted a table and a guest bedroom at my parents’ house. So this is not the perspective of one of those “flat-painters” or “wallpaper people”: I was THERE. I remember. I just don’t totally understand.

Like most members of my generation, I cannot pass up an opportunity to shift the blame to Baby Boomers. Their kids were growing up and they had more time to sink into household projects. This was their answer to a childhood in post-war houses that were painted in solid colors, I guess. Always the rebels, those boomers. Obviously I sponge painted as a child, so sure, my generation was in on it. And after a lifetime of “everyone is special” and “you all get a trophy” we believed that maybe we were decorating savants. But with most decorating trends, “so simple a child could do it” isn’t really an endorsement.

Maybe there weren’t generational factors at play. Maybe it was just the final gasp of 90s DIY culture. Maybe El Nino led to an explosion in the sea sponge population. Or maybe we just all lost our damn minds for a while there.