Show of hands for everyone who watched The People v. O.J. Simpson: American Crime Story on Tuesday night?? Great. Most of you. You’re not alone. 5.1 million viewers also watched the premiere of the latest true crime addiction, and guys, it’s worth it. People from their late 20s up probably remember the OJ Simpson case clearly, since it was covered by the media in excess from 1994 to 1995. As for me, I don’t necessarily remember being glued to the trial since I was nine years old, but I do remember my 4th grade social studies teacher Ms. Reinhardt bringing in one of those TVs on a large rolling cart on October 3rd, 1995, the day the verdict came out. I remember her saying something akin to, “This is an important moment in U.S. history, we’re going to watch this.” And we did. And she was right. 20 years later, America is still compelled to the story, and it’s just as intriguing as ever.

But seeing as how we were kids when this first came into the public eye, I didn’t exactly understand or know all the facts. I also didn’t care enough to do more research on the people with Encarta. But now that the Internet exists, specifically Wikipedia, finding facts about this case and the folks in it is as easy as pie. While I was watching Tuesday’s episode, I was switching between Wiki and IMDb needing more info. Here are some surprising facts about the key players in the OJ Simpson trial that I found out thanks to my extensive Internet research. What a time to be alive.

Wiki-Wiki-What?: Is the co-founder of ShoeDazzle.com, an online fashion subscription service that you probably know from annoying pop-ups on your Internet journey. He is also the voice of, and pictured in, the TV commercials for LegalZoom, the online legal technology company he co-founded in 2001.

Played by: Courtney B. Vance

Wiki-Wiki-What?: A month after his victory with OJ, Johnnie scored another big legal win with another high-profile client – Tupac Shakur. In early 1995, Tupac had been sentenced to 1 1/2 to 4 1/2 years at New York’s Riker’s Island prison stemming from a 1993 sexual assault case. Thanks to Johnnie’s help, Tupac was released after Death Row Records execs put up some of the $1.4 million bail. Tupac would be killed a year later.

Wiki-Wiki-What?: He definitely doesn’t have any famous family members LOLOL Ok but frreal,in 1973, Robert co-founded a trade publication called Radio & Records that provided news and airplay information for the radio and music industries. It was used as a ref for a number of countdown shows throughout the years, including Casey Kasem’s American Top 40, Solid Gold, and Rick Dees Weekly Top 40. It was relaunched as a sister trade to Billboard and had its final issue in 2009.

Wiki-Wiki-What?: He served as the defense lawyer for Patty Hearst in 1976, when the 19-year-old newspaper heiress was on trial for committing armed bank robberies under the control of the Symbionese Liberation Army (cray revolutionary/terrorist group). They kidnapped her, sexually assaulted and brainwashed her, hence the robberies.  Bailey failed to win the case, and Patty was sentenced to seven years in prison. Almost two years later, President Carter commuted her sentence and in 2001 she was pardoned by Bill Clinton.

Wiki-Wiki-What?: Nicole first met OJ when she was 18 and working as a waitress at upscale Beverly Hills/Rodeo Drive nightclub Daisy. He was still married to his first wife Marguerite when they started dating and he subsequently divorce Marguerite two years after meeting Nicole. 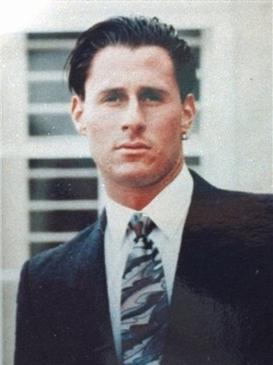 Wiki-Wiki-What?: He occassionally worked as a nightclub promoter throughout Los Angeles, and also worked as a waiter and had aspirations to be an actor. In 1992, he appeared as a contestant on the short-lived game show Studs (this clip is fabulously 90s), which was basically a dating show with hot guys (Jon Hamm and Chris Hardwick were also contestants on said show).

Played by: (The amazing) Sarah Paulson

Wiki-Wiki-What?: Marcia played District Attorney Sidney Barnes in a 2013 episode of Pretty Little Liars called Now You See Me, Now You Don’t. She gives the good news to Hanna’s mom that the murder charge against her (for killing Detective Wilden) were dropped after the real killer was identified. I watch PLL and I don’t remember this. Apparently Marcia’s a big PLL fan.

Wiki-Wiki-What?: In 1997, Christopher married Marcia Carter, who was the vice president and corporate controller of Rysher Entertainment, a TV and movie production and distribution company. You might be familiar with the company if you stayed through the end title credits of shows like Saved by the Bell, Star Search or Sex and the City.

Role in Case: Judge in the trial

Wiki-Wiki-What?: After apparently meeting on the v romantic setting of an Eagle Rock, California murder scene, he married Margaret Ann York, the first woman to attain the rank of Deputy Chief in the LAPD, making her the highest-ranking woman officer in that department when she retired in 2002.

Role in Case: OJ’s girlfriend at the time of the murders

Wiki-Wiki-What?: OJ and Nicole divorced in 1992, and he had been dating the model/actress for a while until the morning of the murders, she allegedly left OK a 30-minute long message on his answering machine to break up with him. She said in the voicemail that she was flying to Las Vegas to be with Michael Bolton – yes that Michael Bolton. They had met on the set of his 1994 music video for the song Completely, and apparently fell in love? Well doesn’t matter because she stuck by OJ’s side for a while until she couldn’t take the pressure of the murder trial anymore.

Role in Case: Witness/friend of OJ and Nicole/lived in OJ’s guest house at the time of the murders

Wiki-Wiki-What?: Following the trial, he made a number of appearances, including the very first episode of MADtv, and Mr. Show with Bob and David. He was also randomly BFFs with SNL alum Norm Macdonald.