Just think: we are now two days past the biggest fashion night in the American football calendar! I grew up rooting for whichever Super Bowl finalist had the best uniform (except for the years the Buffalo Bills were in play, which: the less said the better). Through the iconic halftime shows and national anthems of our youths – Whitney and M.J., anyone? – to the fashion “controversies” of the 2000s – you really don’t want to get me started on Janet and J.T. – Super Bowl Sunday is the most fashion excitement you’ll find in a football game all year. So how did Super Bowl 50 stack up? I’d say it was one of the best Super Bowls yet, sartorially speaking.

Here are the best of the best, in no particular order: 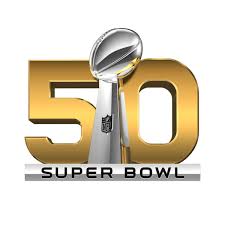 So many of us learned Roman numerals through the ever-changing Super Bowl logos – or, for us Catholic schoolers, through a healthy mix of Super Bowl logos and Bible stuff. I liked the unchanging tradition of it, the insistence on being way more fussy than necessary because the Super Bowl is football’s fanciest day. Roman numerals are like when numbers wear a tuxedo – just classy as hell. But to be honest, Super Bowl L looks stupid. We all know it looks stupid. It sort of just looks like we’re saying it is a large Super Bowl. The NFL realized that, and the resulting logo is way better than a large letter L.

Somehow Head B.I.C. is always two and a half years old in my brain, so when I see photos of her she always seems like the most self-possessed, mature toddler ever. But no, baby Blue is four now, and her neon bomber jacket reminds me of all of the best parts of being a 90s kid. Also wearing a pretty great jacket: Apple Martin, a smaller Gwyneth Paltrow. 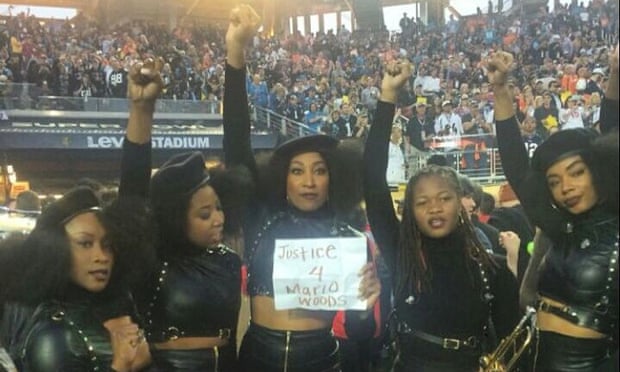 What’s better than one Angela Davis? An entire troop of dancing Angela Davises. And in case you missed what they were going for, check out those Black Panther/ Malcolm X hats. And in case you still REALLY weren’t sure, they will tell you with a Justice for Mario Woods sign. FYI: the leather outfits were designed by Zana Bayne and she has some great behind-the-scenes photos of the day on Instagram. Pam Grier tweeted about the halftime show and I hope she appreciated that her iconic 70s look is back in style. 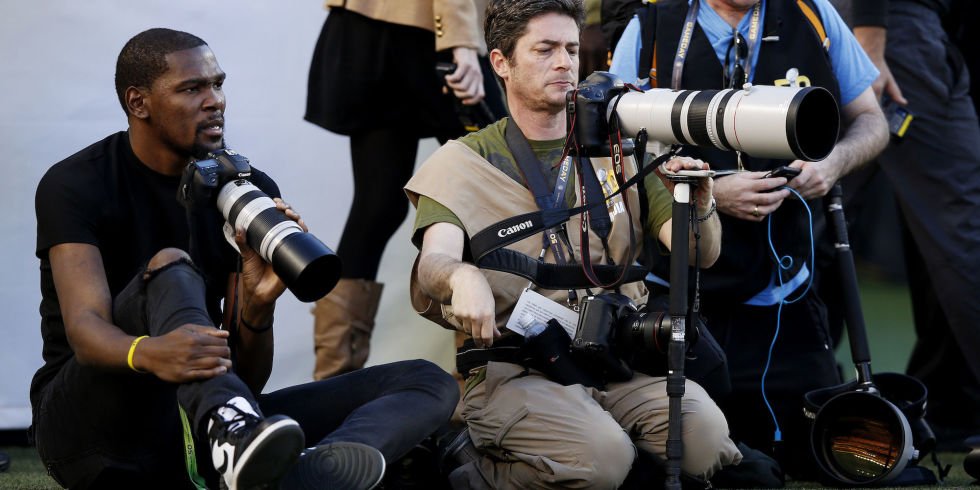 This outfit reminds me of Lady Gaga’s version of being an elementary school teacher, where they’d wear a turtleneck, chunky sweater, and jumper that all related to the same theme. You know, Miss Frizzle style. I find Gaga’s version of really flooring it, outfit-wise, to be so endearing. She’s in a shiny pantsuit, for Pete’s sake (by Gucci, because Gaga’s still Gaga). And since she’s singining the national anthem, that shit is RED.  With blue nails. And red eyeshadow. And because it’s football, she has the Gaga equivalent of Texas cheer mom hair. The shoes? Stars and stripes. And if you couldn’t tell, I say all of those things with complete affection. Pair this with a note-perfect rendition of the Star Spangled Banner and we have a pop star even your granny would love – fun, patriotic, respectful, and really committed to a theme.

Here’s something I don’t think we talk about enough: how Beyonce has made a signature look out of not wearing pants. She’s such a big deal that we all accept this long sleeve, no pants look and don’t even mention that usually, humans wear something on their lower half. This look was classic Beyonce, but the military styling was also a perfect fit with Formation. We’re told (by designers Dean and Dan Caten) that any resemblance to a certain other iconic Super Bowl halftime show look was strictly coincidental:

I’m a sucker for a “(Product) Through The Years” commercial format anyway, but this Pepsi ad was really remarkable. I loved Janelle’s classic James Brown suit, Madonna garb, and modern sequined look. Keep an eye on the background dancers: they look just as great. Now let’s get Janelle a halftime show of her own, why don’t we? And a 2014 Grammy nomination, please, because I still maintain that she should have had one.

This is on my “bworst” list: gross word, but I mean a combination of best and worst. It’s not technically good, but it’s so very Chris Martin that the second I saw it I was like “oh, of COURSE.” As in, of course he’s wearing a line of Lisa Frank yoga clothes designed for a production of Godspell. Oh bless the Lord my soul. Also the second I saw his little face peeking out between Beyonce and Bruno Mars, I knew he was going to be a meme – so I do want to call attention to the fact that I think he did well and I liked his rainbow color scheme.