It’s hard to believe that it’s been a whole year since I was made, let’s be honest, entirely perplexed and 100% jealous by the 2013 Victoria’s Secret Fashion Show. But here we are again, with another night of impossibly attractive people, whimsical angel wings, bizarre segment concepts, and Taylor Swift. If the VS folks just aired the same show every year, how long do you think it would even take us to notice? Still, I managed to find a whole new set of things to make me say WTF this year.

I don’t know, I think the theme is fancy screensavers. Or seizures. They’re just projecting flashy patterns on an LCD scrim.

As of three minutes in, I can’t be sure how many ladies have walked because they all look identical. Is this some sort of VS Fashion Show/ Orphan Black crossover? Because that, I would watch.

There’s one with brown hair, and they make her wear wings that are actually enormous puffed sleeves, like she’s the Anne Shirley of this joint.

All of these ladies have serious Leonardo DiCaprio’s Girlfriend hair.

Models look pretty on airplanes. That’s the Truth I Didn’t Want To Face of the day.

Models on a plane.

Me on a plane.

Taylor Swift is performing in a nightgown from an Anne Rice story. It’s Blank Space, that song about lonely Starbucks lovers.

A model walks down the runway wearing wings made of trees from the Lorax. Or models of amoebas.

T.Swizzle serenades each one of the Walking Girls, like the emcee of this children’s beauty pageant in a documentary I once saw. And like the pageant children, the walking girls pretend to like it.

Karlie gets what appears to be rattan fly wings instead of angel wings. They make the girls who don’t get wings wear filmy capes. Do NOT piss off the guy who hands out the wings.

I missed a minute and came in for a lady (some sort of layman?) calling the models “curvy and voluptuous”. Those words are as cringe-y as “moist” and “nosh.”

We learn about the “fantasy bra,” which is basically like if Rose Dewitt Bukater had a bra.

Sheeran isn’t singing that one song about the cold prostitute. But he is dressed like Ron Weasley at a Christmas Ball.

“Exotic traveler” means they’re dressed like porny Madame Alexander dolls. We have a gal in a Native American headdress, a chilly bullfighter, then a lot of neon shit that’s supposed to be … Brazil maybe?

One broad (Kelly Gale?) has a plastic printed skirt that looks like she’s representing whatever part of the world Delia*s (RIP) is from. 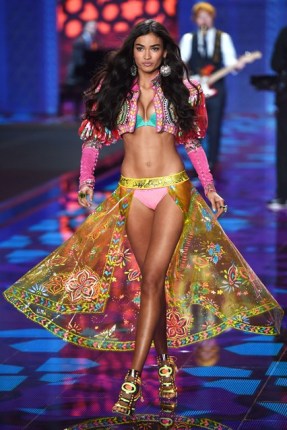 Does Ed Sheeran have a tattoo of sunglasses on his forearm?

I think one model (Daniela Braga) is representing Fraggle Rock. A model (Candice? Behati?) compares reaching the end of the runway to scoring a touchdown. Fitting, because I compare watching the VS Fashion Show to the Superbowl. You’re watching genetically gifted people do what they’re made for, but you still sit back and armchair quarterback it anyway.

Ariana Grande wants to “spank a booty;” I continue to not get it about booties.

I missed about a minute of commercial time when I could have been brushing my teeth and letting my dog out, because I didn’t realize that this hour-long commercial had gone to commercial.

“Bigger fan to de-arm this… and if your rhythm is needy ga ha harm me holla holla holla baby”: What I hear in Ariana Grande’s lyrics. Girl, ENUNCIATE.

Putting her next to 6-foot models really highlights that Ariana Grande is awfully Ariana Pequeña.

My B.A. isn’t from the University of Pink, but at my college there were a lot more hoodies and uggs.

Oh. There are backup dancers dressed like an early 2000s Missy Elliot. Which works, because everything Grande sings sounds like the lyrics that came after “put that thing down, flip it and reverse it.”

Doutzen tells us that it takes a year to make the wings. Damn. Monica Something, the layman who was talking before, talks up the wings as well.

I love Hozier but this is a weird combo, right? The setup is very Hansel and Gretel, Black Forest-y. Hozier is just kind of there, singing soulfully, and the models walk past him without making eye contact like he’s a busker and their train is coming.

Monica Whatever was right, though. These wings are gorgeous.

Russell James is an Australian photographer who is “like a monkey on the set” and “likes to push us a little bit,” but in a pranky George Clooney way, not in a skummy Terry Richardson way.

He has photographed an entire book of the angels – titled Angels – which would make the perfect Christmas gift for the lady in your life who really needs her self-esteem knocked down a peg or two.

Karlie Kloss discusses her love of ballet, because in case you forgot, she’s lovelier than you. She dances (beautifully, of course) with a guy in a Puffy Shirt.

Swiftie is sort of like the Mama (Chicago) or Mama Rose (Gypsy) of this segment.

There are like 10 times more models than I saw during the entire show so far.

Too many models. I’m gonna go do squats and crunches for the next forever, bye.

Do the do full face transplants if you aren’t’ technically disfigured? Asking for a friend.

It honestly looks like this is the most fun these models have all year, since this sort of goofiness isn’t allowed on any other runway, ever.

There are so many balloons, it’s like the telethon episode of Full House. 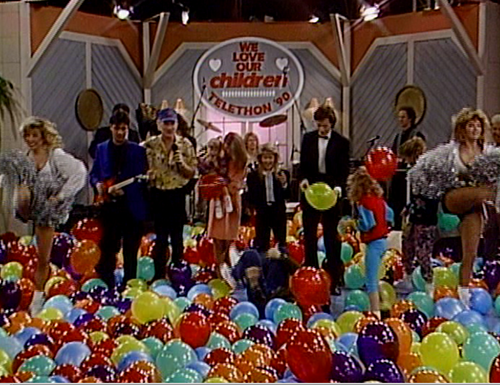 7 thoughts on “Victoria’s Secret Fashion Show 2014: Things That Made Me Say WTF”