Well guys, it’s January, which means one thing:  a new season of The Bachelor! America’s favorite guilty pleasure is back, and so is our inability to stop watching year after year despite telling ourselves otherwise. But I mean, how else are we supposed to judge others as a community while downing bottles of wine?? And this time around, the 20th season of The Bachelor features one of the most beloved contestants in the series, Ben H(iggins).

When Ben H. was dumped by Kaitlyn on last year’s The Bachelorette, the cries of thousands of females (and males) were heard around the country, including mine. He was one of the nicest, non-dramatic, HOT, there for the *right reasons* contestants on the season, and it was obvious he was going to be chosen as the next object of affection. Now that he has the title, all he needs is a slew of women stirring up some trouble inside the mansion as well as his heart. Last night, we were introduced to the 28 ladies vying for Ben H. and it’s already off to such a great start. In full disclosure, I latched myself onto my friends’ Bachelor fantasy league yesterday afternoon and I have a lot more riding on this season than normal (nothing, we’re playing for nothing) but it is intense THERE IS AN EXTENSIVE GOOGLE DOCUMENT AND I AM EXCITED. Here are some of the contestants who stuck out to me (and might be part of my fantasy team), and maybe not all for the *right reasons*.

Get these girls a ticket to their hometowns already

Lauren B. seems to already be a favorite among #BachelorNation, but more importantly to Ben, who was obviously smitten with her during their brief chat in front of the fireplace.

I’m in the “Who Cares” camp if someone from a previous season comes back to the show again, because on the real, it’s a whole different ball game. Becca’s relationship with Chris Soules is completely different than the one with Ben. On top of that, if her romance with Ben is stronger than his is with, say, Olivia, then let them be, amirite?!

Caila, like Ben, is a software sales rep, so they probably have a lot of corny jokes about Mavis Beacon or something. TBH, I don’t think she’s The One, but she has a chance of making it in the final four.

Every season, the winner and/or runners-up tend to come out of nowhere. They suddenly get a lot more air time in the middle of the season and next thing you know you’re rooting for them to win because they have a *connection* (See: Jef, Catherine, Jade). These girls might be the ones to surprise us this year.

There’s something super chill about Samantha that makes me think she’ll stick around for the long haul, and perhaps Ben sees it too. Or maybe it’s because she reminds me of a mashup of Jordan and Tara from Chris’ season.

JoJo is also someone with a chill vibe – basically I feel like I could hang with these girls except for the fact that I would feel super old and haggard around them. Anyways, JoJo seems normal and is there for *the right reasons*.

IDK what it is guys, but Jami could guerrilla attack us and end up being the next Bachelorette. She’s gorgeous, and Ben hit it off with her in the limited minutes we saw them together, but I have high hopes for her.

Keep Them In Your Bracket For A While

This mother of twins seems to be another fan favorite, and she also shares something in common with Chris Soules’ (ex) fiancee – their high voices.

Listen, Jubilee sounds like a badass I don’t want to mess with, so if Ben is smart, he shouldn’t cast her off so soon either.

I don’t want to say I dislike Amber, but all I’m saying is I don’t feel anything for her when I watch her on the show. I don’t love her, I don’t hate her, I don’t anything her. But looks like Ben does.

Jennifer also didn’t get a lot of screen time last night, which either means she’s leaving soon or she’s staying for a bit. I can’t even remember why I wrote her down as not leaving anytime soon, so here we are.

This should be self explanatory.

She may have gotten the first impression rose, but I had a feeling she had crazy eyes before the crazy seemingly came out in the promo for the rest of the season. Also, she said, “I’m really humble”, which is a thing actual humble people don’t say.

Bitch came in with a giant rose on her head and proceeded to examine his incisors.

The token wasted girl on the first night. If you watched it, you already know.

Honey sweetie you made it this far but your journey ends here (or in an early episode). Take a moment and say your goodbyes.

Her entrance was all in Russian (?). Brilliant move by the show’s editors: only show her speaking not English for the rest of the episode. Homegirl is from Utah.

She had a cute little game with Ben on the first night, but her luck might run out soon enough.

Honestly, I think no one even calls her “LB”, but there was already a Lauren B., so she had to pull a Lauren Conrad instead.

No matter how many times I look at her, I still don’t remember her.

Sidenote: EVERYONE IS SO YOUNG. I GET BEN IS 26 BUT THESE ARE BABIES.

But seriously, she looks like the captain of her high school cheerleading team.

Special shoutout to Tiara the “Chicken Enthusiast”, who got cut the first night. At least we got to see this: 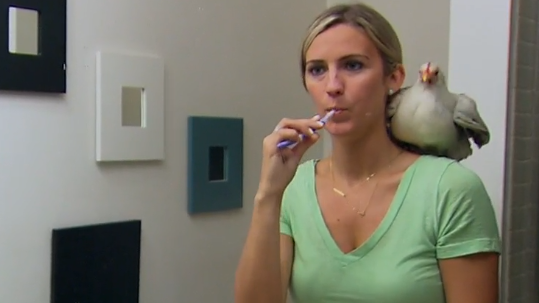