The 2018 Golden Globes were a little different, and so is our Best Dressed list. Actors used the night as a platform to say something about sexual abuse, harassment and structural inequality, so we’re going to highlight their opinions and accomplishments along with their gorgeous black ensembles. In her New York Times op-ed, Amber Tamblyn wrote:

We actresses are not just modeling clothing when we walk a red carpet on award show night. We are modeling a kind of behavior. We are speaking in a coded language to other women — even young girls — that says: The way I look and what I wear and how I wear it is the standard for women. What is being worn is not an exception. It is the rule. You must dress a certain way and look a certain way if you want to be valued as a woman, no matter what you do for a living or who you are. We never intend for this to be the message we are sending with what we wear, but often it is the perceived one, whether we like it or not.

Last night clothes were part of the message – but just one part. Here are a few of our favorites:

Serving this headwrap fiercness is Tracee Ellis Ross, an actress best known for her work in Girlfriends and Black-ish. She’s won six NAACP Image awards for acting and been nominated for Emmys twice. Her 2016 Emmy nomination for Outstanding Lead Actress in a Comedy Series marked the first time an African-American woman had won in that category in 30 years. Last year, she won the Golden Globe for Outstanding Lead Actress in a Comedy Series – making history as the first black woman in 34 years to win in the category. Tracee is wearing Marc Jacobs.

You probably know who Michelle Williams is. Dawson’s Creek kicked off her career, but since then, she’s become the most credited actor and has the accolades to prove it. Four Oscar nominations and one actual Golden Globe, Michelle simply transforms on screen. Her plus one at the Golden Globes last night was Tarana Burke, who started the #MeToo movement back in 2006.

“I thought I would have to raise my daughter to learn how to protect herself in a dangerous world, but I think the work that Tarana has done and the work that I’m learning how to do — we actually have the opportunity to hand our children a different world,” she said at the Globes. “I am honored beyond measure to be standing next to this woman. I have tears in my eyes and smile on my face.”

Susan is best known for her roles on Louie, NCIS, The Blacklist and of course, This Is Us. She has a BFA from Howard University and a Master of Fine Arts degree from NYU’s Tisch School graduate acting program. She also may or may not be Blue Ivy in the future. Susan is also the director of non-profit Drama Club, an organization that provides theatre programming to incarcerated and court-involved young people in New York City. She’s wearing Monsoori. 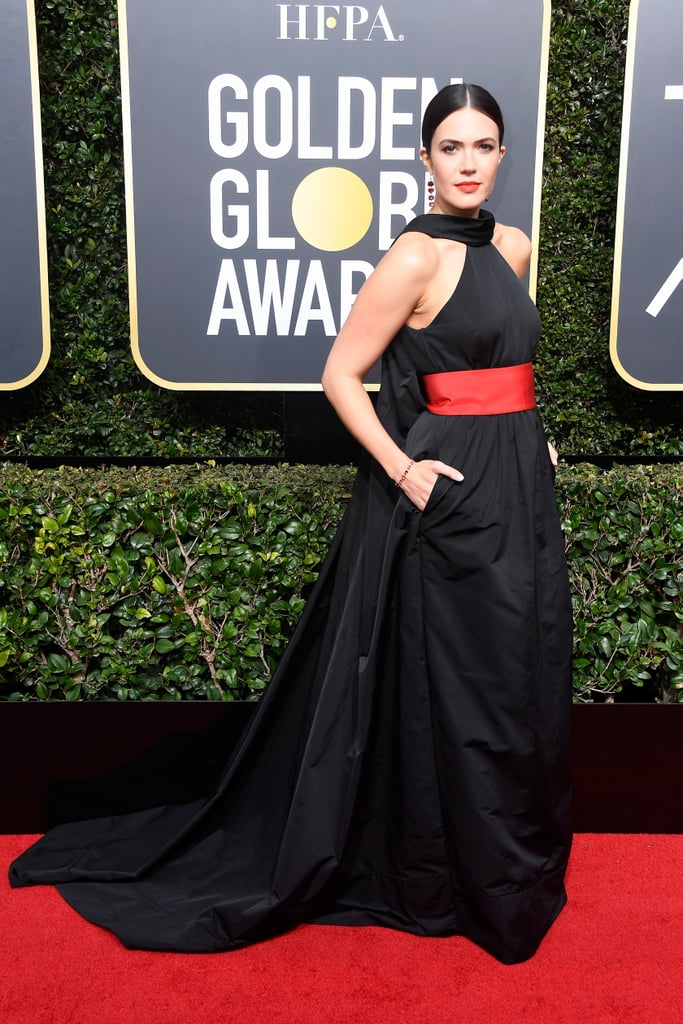 Mandy Moore is the multi-talented star who may hold different titles depending on your generation. If you were alive during the TRL era, you still don’t know who Mandy’s missing like Candy. If you were born during the TRL era, you either know her voice from Tangled or watch the hit NBC program This Is Us. Mandy has been active with philanthropy over the years, including Five & Alive, Leukemia and Lymphoma Society, and Children’s Hospital Los Angeles. She recently was a spokesperson for Dove’s self-esteem movement, aimed at introducing girls to real, admirable women to look up to. Mandy is wearing Rosie Assoulin.

Jessica Biel is an actress whose first big gig was in 7th Heaven as the oldest sister, Mary Camden. She was just a teen when she started in Hollywood, and went on to appear in films like Texas Chainsaw Massacre, Summer Catch, Valentine’s Day, and New Year’s Eve. Lately, she’s been producing more of her own projects, including The Sinner, which earned her her first Globe nomination for Best Actress in a Miniseries or TV Film. She also spends a lot of time giving back to her local and global community – In 2010, Jessica teamed up with the UN Foundation to raise awareness of the global water crisis, and climbed to the summit of Mount Kilimanjaro.  Jessica is in Dior. 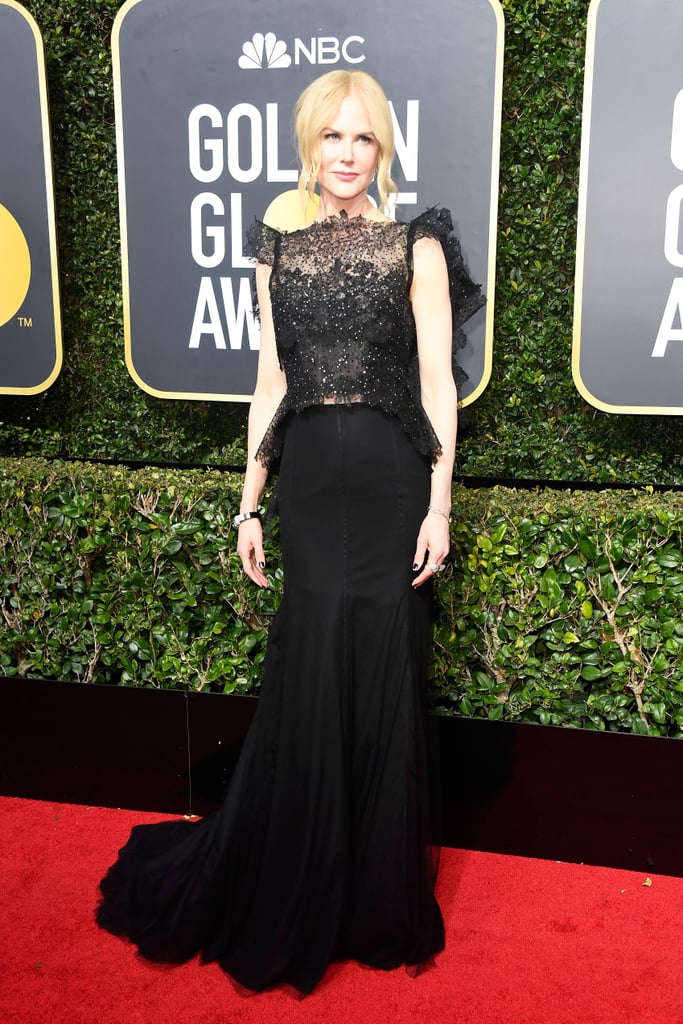 Nicole Kidman is an actress and founder of the production company Blossom Films. She is an Academy Award winner and a five-time Golden Globe winner, and has found that producing films has “allowed me to shape my career in terms of being able to find things that I may not get offered, that I wouldn’t get the opportunity for.” Kidman is also a founding member of the powerhouse coalition, Times Up. In her acceptance speech for Best Actress In A Mini-Series Or TV Movie in Big Little Lies last night, Nicole said: “My mom was an advocate for the women’s movement growing up, and standing here, my achievements are her achievements. This character I played represents something at the center of our conversation right now: abuse. I hope we can elicit change . . . let’s keep the conversation alive.” Nicole is wearing Givenchy (fun fact: Givenchy was a favorite of Audrey Hepburn; both Hepburn and Kidman served as UN Goodwill Ambassadors).

Alison Brie was nominated for a Golden Globe for work role in Glow, and currently appears in two nominated films: The Post and The Disaster Artist. She is also familiar to TV audiences for her role on Community. Alison did all of her own stunts for Glow, a series about female wrestlers in the 1980s. wrestling-based series. In 2017, Brie threw her support behind Planned Parenthood, saying “it’s a vital resource for women in this country. Women need and deserve the right to make their own decisions regarding their reproductive health.” Alison is wearing Vassilis Zoulias. 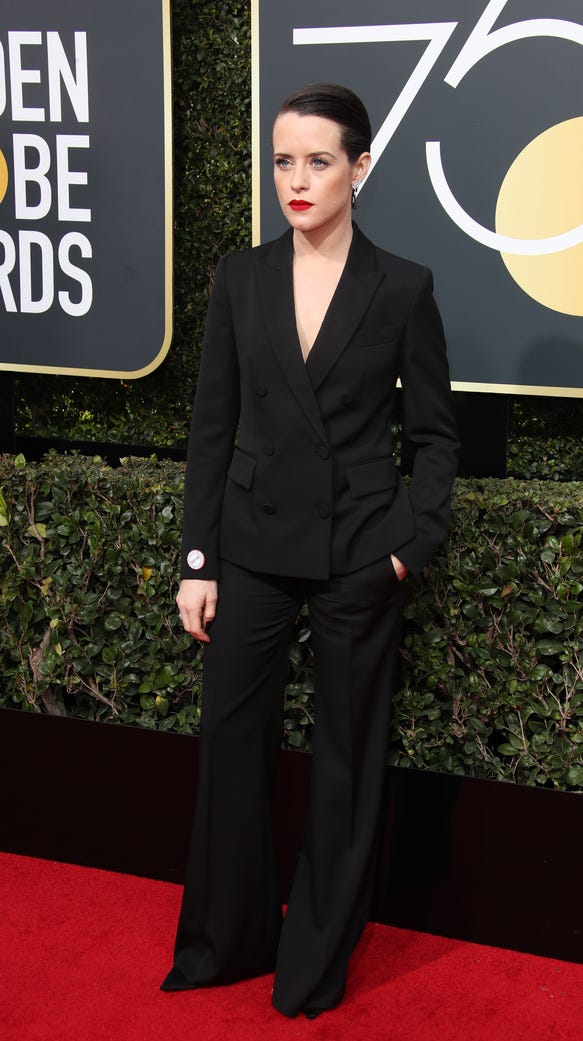 Nominated for her role in The Crown last night, Claire Foy is a university-trained actress who is also known for another royal turn – Anne Boleyn in Wolf Hall. While filming her acclaimed role of Queen Elizabeth, Foy was also caring for her infant daughter. Of her hopes for her child, Claire said: “I wish there was a way of saying to girls: ‘You don’t have to be polite and pretty in order to survive and have people love you.’ The idea that you should be like everybody else genuinely breaks my heart. And I’m going to have to do something about it.” Claire is in Stella McCartney. 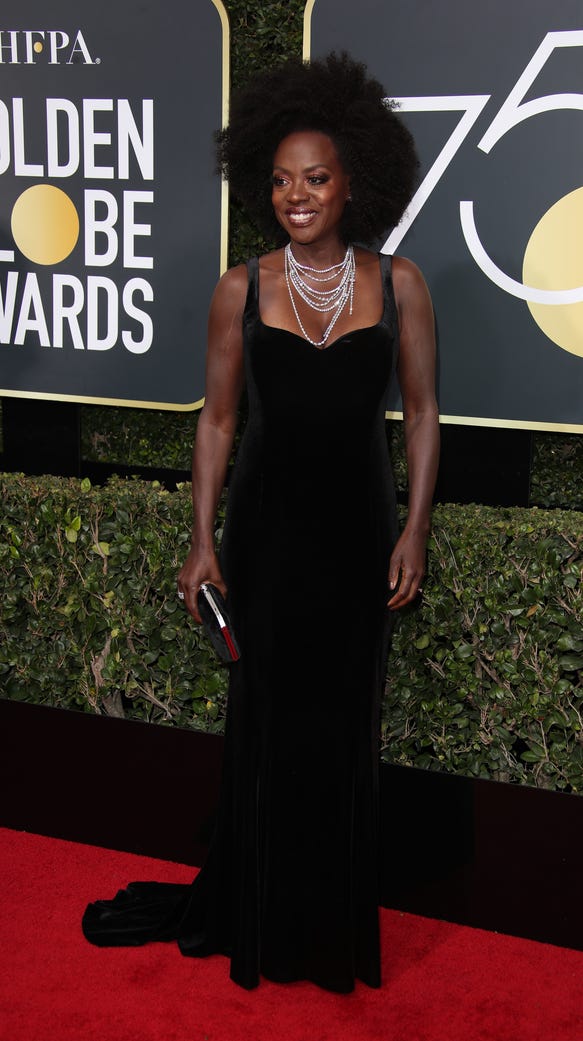 One of the most-nominated actresses alive today, Viola Davis is the only black actress to have one an Oscar, an Emmy AND a Tony. The Juilliard-trained actress has, in fact, received so many nominations and awards that Wikipedia lists them separately from her main page. Davis is an ambassador for Hunger Is, an organization that combats child hunger; the organization has raised over $20 million for the cause. Last night Davis addressed victims of sexual assault and rape – actually saying the words – saying “it’s not their fault, and they’re not dirty. That’s my message tonight.” Viola is wearing Brandon Maxwell.

Harvard-educated actress Natalie Portman presented the award for Best Director last night, which she noted contained “all male nominees,” despite, for instance, Greta Gerwig’s direction of Best Picture – Musical or Comedy winner Lady Bird. Portman promotes anti-poverty causes and works as an ambassador for FINCA, an organization that provides micro-loans to women-owned businesses in developing countries. She also lead the Power Of A Girl campaign for Free The Children, challenging North American girls to raise money for a girls’ school in Kenya. Natalie is a founding member of Time’s Up, and attended the Golden Globes with fellow founder, actress and activist America Ferrera. Portman wore Dior Haute Couture.

Donate to the Time’s Up Legal Defense Fund on their GoFundMe page. Learn more about Time’s Up here. 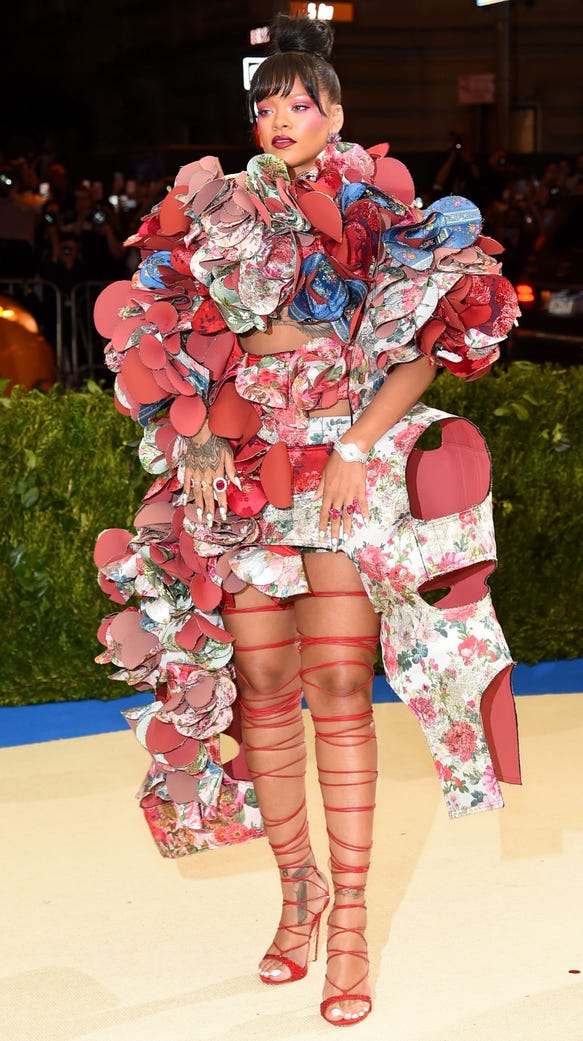 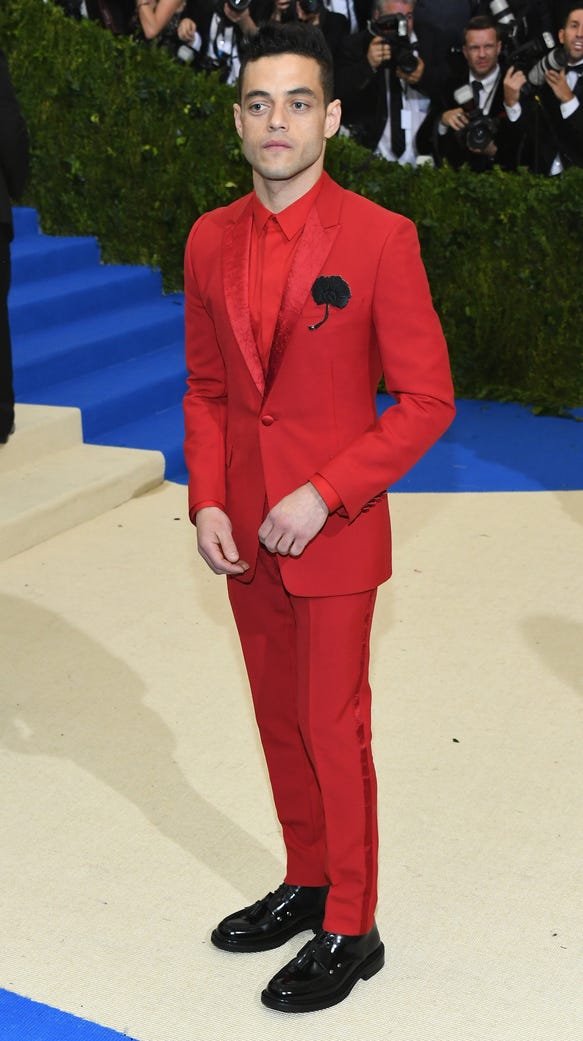 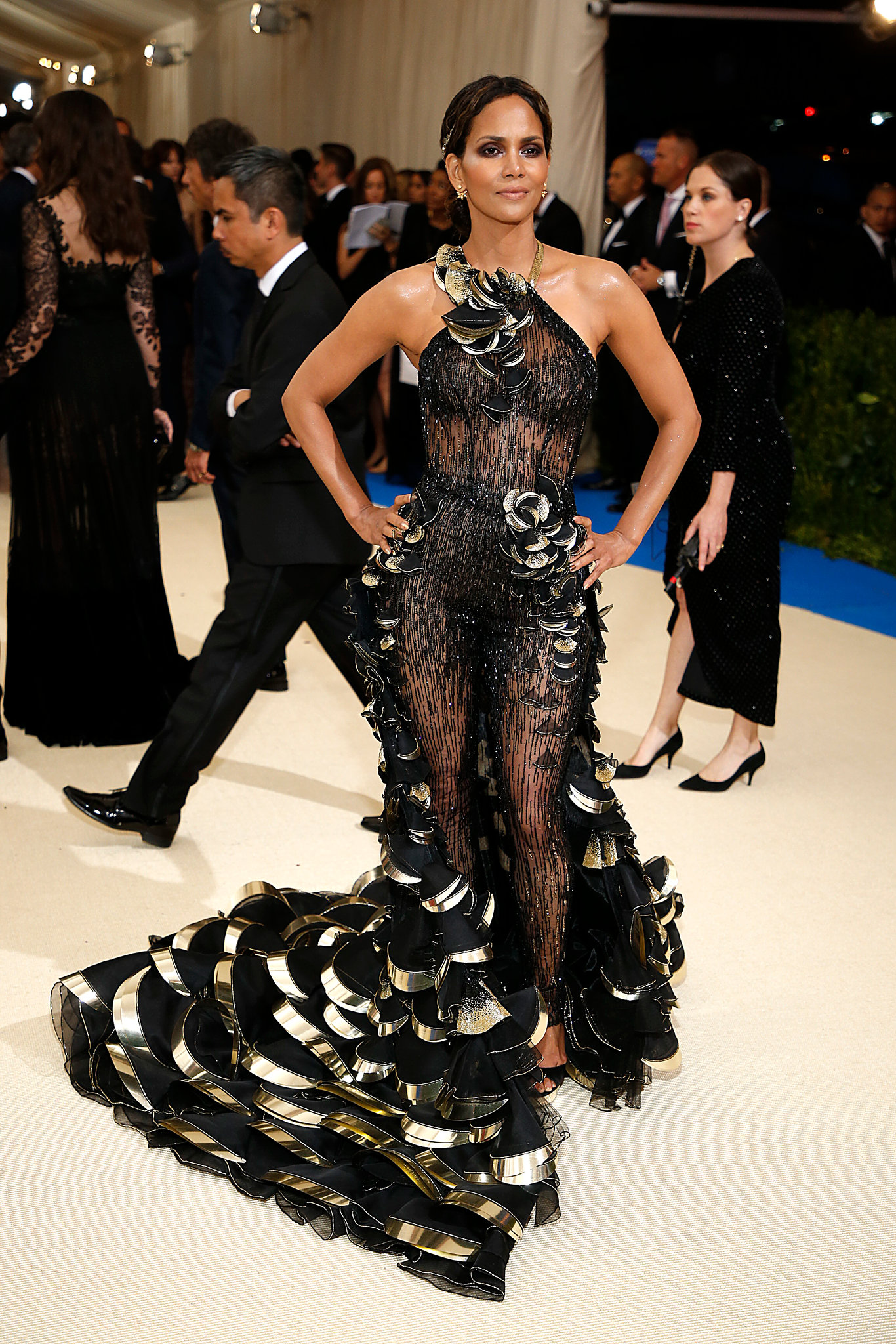